Steelers linebacker coach Keith Butler says he can't teach players how to run fast or hit people. Williams can hit. Can he learn how to cover receivers?

The knock on sixth-round pick, linebacker Vince Williams, is whether he can play three downs in the NFL - or simply put, whether he can cover receivers.

While Williams attacks ferociously downhill against the run, his skills in pass coverage were deemed low enough that Florida State took him off the field on passing downs.

Steelers linebacker coach Keith Butler points out, as quoted by Post-Gazette reporter Ed Bouchette, Williams will be given an opportunity in training camp to show whether he can cover receivers. 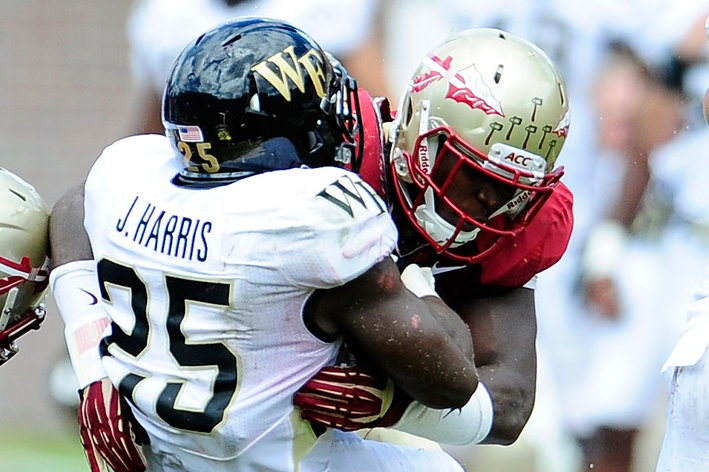 Steelers sixth-round draft pick Vince Williams made an impression at the 2013 Senior Bowl.

And Bouchette points out it wasn't long ago current starter Larry Foote left on passing downs as well.

"We will make that judgment when we get to training camp whether he is capable of being a three-down linebacker as opposed to being a two-down linebacker," Butler was quoted as saying in Bouchette's article.

Breaking through the technical jargon and relative soft skills of playing linebacker in the NFL, Butler says there are two things he cannot teach players; how to run fast and how to hit.

Williams can hit. No one disputes that. So in a way, he's halfway there.

With Butler's comments regarding the future health of 2012 third round pick Sean Spence not exactly being optimistic, and Stevenson Sylvester only having a one-year deal, Williams has an opportunity to push for a roster spot. The position is suddenly thin behind 34-year-old Larry Foote.

The Steelers host their rookie minicamp this weekend, and Williams will definitely be someone on the radar.