Before the draft, whether the Steelers would draft a running back was still a question. The Steelers answered with a pick in round-two and have continued to invest more and more hope in him ever since.

Many who follow the Pittsburgh Steelers lost a little hope when Rashard Mendenhall left the team in free-agency, but the team itself remained hopeful toward 2013.

If there was any doubt lingering in the minds of the coaches or front office, they all disappeared when Le'Veon Bell fell to the team in the second round of the NFL draft.

Steelers GM Kevin Colbert joined Ken Laird and Guy Junker on TribLive.com today to talk about multiple topics, but it was hard to forget his comments on the rookie Bell. According to Colbert, from the very start they saw Bell as "an NFL back". 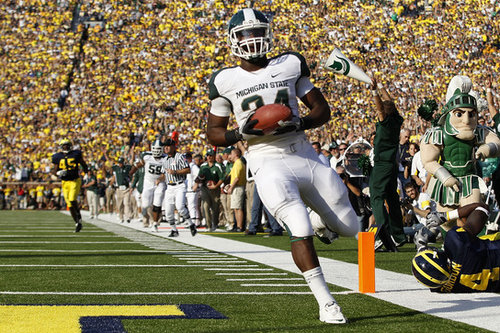 The Steelers offensive coordinator feels their rookie back is an every down player.

"He had 1,700 yards last year, and close to 900 of those yards were yards after contact; which indicates an ability to make NFL runs, because the holes in the NFL aren't going to be the same as they are in college. You saw him make a lot of, what we thought were, NFL type runs. Even if he only had a one yard hole that was blocked, once he made contact, he always seemed to fall forward for four more."

The Steelers are obviously investing a good bit of hope in Bell to correct a dismal running game, which suffered its worst modern performance last season, when a committee approach left the team sporting a different lineup almost every week. Reportedly, Bell has already surpassed teammates Jonathan Dwyer and Isaac Redman on the team's depth chart; although depth charts are almost meaningless this time of year. If Bell lives up to offensive coordinator Todd Haley's billing as a three-down back, the rookie could find himself with the bulk of the carries before camp breaks.

Regardless of where Bell winds up on the team's opening day depth chart, there is no doubt where the team wants him to be.