The veteran tight end is back where he began, doing exactly what he did the last time he was there -- replacing superior players while upholding the standard.

The old running joke used to include chanting the first name of starter Heath Miller in one collective syllable, whenever Matt Spaeth would make another Miller-esque reception in a crucial situation. With Miller now recovering from serious injury, the Pittsburgh Steelers knew the resemblance was no laughing matter.

On March 15th, Spaeth re-signed with Pittsburgh, the team which drafted him in the third-round in 2007, after spending two seasons with the Chicago Bears. Some viewed the signing as some sort of gag, retreading wheels we cast aside long ago; but history reminds us why Chicago found him valuable enough to trade away Greg Olsen to the Carolina Panthers when they signed Spaeth prior to 2011, and why his signing should be taken seriously.

Spaeth never put up the statistical figures of his fellow co-starting tight end Miller, but Spaeth wasn't on the field to catch passes. He was there to block. The fact he could catch and then drive through defensive backs in the same manner which has endeared Miller to Steelers fans was just an added bonus.

Spaeth wasn't the only free-agent tight end added to the off-season roster, but he is considered the favorite to earn a roster spot replacing someone; who exactly has yet to be determined. 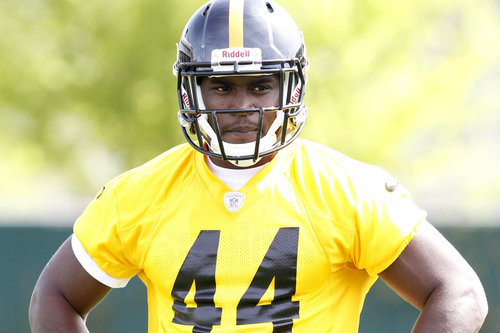 As the team prepares to enter OTAs, they officially sign their second draft-pick.

Originally, Spaeth was viewed as a temporary bandage for the ailing Miller; but Miller has not been ruled out of the season opener as of yet. Even if Miller is able to go, surely Spaeth could be an improvement over last year's free-agent addition Leonard Pope when the team looks to rebuild their running game with-or-without Miller. In 2012, rookie David Paulson was head coach Mike Tomlin's favorite son, but there is a definite line between potential and production. If the coaches aren't completely confident in Paulson, Spaeth could leave Paulson battling with the returning David Johnson, who has seemingly no shot at regaining his former fullback role from Will Johnson, for the final roster spot.

None of these players are practice squad eligible. They either make the team, or they are unemployed. The two players currently competing for the one likely squad slot are Jamie McCoy and Zack Pianalto.

If Spaeth can remind Steelers fans of Miller once again this pre-season, he could become just as significant to the team as he was in his first tour of duty, when he logged 39 starts on the same roster as Miller. His career may very well find new life, and eventually end right back where it began.