A small tribute to Ryan Clark: The "other" Steelers safety

It's not easy living life in the shadows. While Steelers safety Ryan Clark certainly has had a solid and memorable career in Pittsburgh, he's often had to play a supporting role to Troy Polamalu as well as many other star-studded Steeler players.

Share All sharing options for: A small tribute to Ryan Clark: The "other" Steelers safety

Pirates second baseman Bill Mazeroski is credited with hitting maybe the greatest home run in Major League Baseball history (and certainly in Pirates' history), when he won the 1960 World Series with a ninth inning blast at Forbes Field in Game 7 against the mighty New York Yankees.

Maz's shot has been celebrated in Pittsburgh for over five decades and will certainly live on for many more years to come. But Mazeroski's homer may have been just a foot-note in yet another Yankees' World Series victory had it not been for the almost equally dramatic (but often forgotten) three run round-tripper that catcher Hal Smith smacked in the bottom of the eighth inning that put Pittsburgh ahead, 9-7. The Pirates entered their half of the eighth inning, trailing New York, 7-4, and Smith's home run put the finishing touches on what probably should have been the Series-clinching come back. Unfortunately, the Yankees came storming back in the top of the ninth to tie the score and set up the dramatic moment for Maz.

Smith's home run has received some love over the years, but nothing compared to the tributes that Mazeroski has received (and rightfully so).

Some people get to live it in the spotlight, while others must play a supporting role.

Polamalu 'in best shape since college'

It'd be nice to believe Troy Polamalu found out after 10 years how to get his body back to its 21-year-old shape, but it's tough to believe, writes BTSC's Neal Coolong

During his seven seasons in Pittsburgh, Steelers free safety Ryan Clark has sort of been known as the "other" safety while playing next to legendary strong safety Troy Polamalu. Oh sure, Clark has certainly received his share of accolades, but his star certainly isn't as bright as No. 43's.

Clark is known as the solid, dependable safety who's allowed Polamalu to freelance and make some of the most memorable plays Steeler Nation has ever seen.

Off the field, there isn't a more charismatic Steeler than Clark (seriously, wouldn't this guy be fun to hang out with at a party?), but on the field, his contributions have often taken a back seat to those of Polamalu, as well as other legends such as James Harrison, James Farrior, Aaron Smith and Casey Hampton.

Whether they admit it or not, I'm sure it isn't easy for most people in any walk of life to sit in the shadows while others get the lion's share of the adulation. And it must be extremely difficult for professional athletes to deal with, especially when most were considered the stars of their high school and college teams.

In addition to being charismatic away from the field, Clark is also known for being very opinionated, and that has often gotten him in some hot water.

But while his contributions on the field have often taken a back seat to those of others over the years, his often controversial remarks shouldn't overshadow his many charitable contributions such as the "Cleats for a Cure" foundation he created in order to help find a cure for Sickle Cell Anemia. Clark, himself, carries the sickle cell trait, and that nearly cost him his life after a game in Denver in 2007. The high altitude wreaked havoc on Clark's condition, and following the game, he had to be rushed to a hospital, and ultimately lost his spleen and gallbladder. 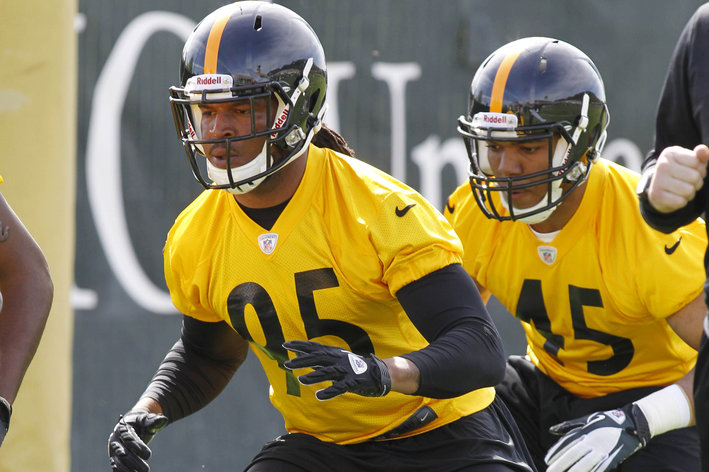 Fortunately, Jarvis Jones will be judged by his production on the field, writes BTSC's SteelCityRoller

As a precaution, it has been Head Coach Mike Tomlin's policy to sit Clark out of games played in Denver since that nearly tragic night six seasons ago, but if it were up to Clark, he'd be on the field for his teammates.

A season ago, when Clark went into Baltimore's locker room to visit Ed Reed following a disappointing loss to the Ravens on Sunday Night Football, he received a lot of flack for fraternizing with the enemy. However, it's a player's actions on the field that should be counted the most, and if he is willing to risk his own well-being for his team, I don't think anyone can question that Clark is a Steeler, through and through.

Speaking of 2012, Clark may have had his best season, compiling 102 tackles and two interceptions while taking on a bigger role in the secondary in the absence of Polamalu, who missed a large portion of the season due to injury.

While Clark's contributions were more noticeable in 2012, they didn't differ much from the dynamic contributions he'd been making all along.

When we talk about Polamalu's many career highlights, perhaps the most memorable was the 43 yard pick-six against the Ravens in the 2008 AFC Championship Game that clinched a trip to Super Bowl XLIII. Of all the great moments in Pittsburgh's most recent Super Bowl success, that one certainly ranks pretty high.

However, what often gets overshadowed is Clark's contributions to the Super Bowl XLV team two seasons later--specifically, his heroics against the Ravens in the Divisional Playoff Game.

With the Steelers trailing, 21-7, in the third quarter, Clark caused Ray Rice to fumble, and this led to a Ben Roethlisberger to Heath Miller touchdown pass to bring Pittsburgh within seven. Later in the quarter, Clark intercepted Joe Flacco, and this set up a Roethlisberger to Hines Ward touchdown pass that tied the game at 21. Pittsburgh went on to win, 31-24, in maybe the most memorable playoff game between the bitter division rivals.

Polamalu was named the NFL Defensive Player of the Year in 2010, and his tomahawk chop of Flacco that led to a critical regular season victory in Baltimore is the signature defensive play that people remember.

Steelers OTAs: Out with the Old

Lots of new faces in OTAs this season, both players and coaches, and every one of them should feel the pressure of a coach and general manager who were kept in place after a disappointing 2012 season.

However, if it wasn't for the postseason contributions from Clark, I doubt the Steelers would have been AFC Champions that season.

But that's life in the shadows.

When all is said and done, and they're both retired, Clark probably won't receive the same special tributes that Polamlau does (and rightfully so), but I think most Steelers fans will remember Clark for being much more than just the "other" safety during his time in Pittsburgh.

Check out all of BTSC's OTAs coverage here. Session 1 runs through Thursday with Session 2 running from May 28-30, and concluding with Session 3 June 3-6. The team's full minicamp runs from June 11-13.