The doghoused Steelers offensive tackle is putting the work in to show he deserves the team's blindside protector job in its new zone blocking scheme.

It's little secret the Houston Texans are one of the league's premier zone blocking teams.

The best rushing team over the last three seasons, they consistently allow few sacks and offer outstanding protection on a team that has won 22 regular season games and two consecutive AFC South championships since 2011.

The undersized Brown, a former tight end, transformed his career from marginal NFL player to the first team All Pro left tackle this past season. Gilbert said, in an interview with Post-Gazette reporter Ed Bouchette, "(Houston runs) an outside zone scheme and (Brown is) a hell of a pass blocker, a former tight end, he's quick as hell. He gave me a couple of pointers about getting out on the defensive end before he gets to you. I used it a lot out here and it [has] helped me out here a lot. I have to pick up on some of his concepts." 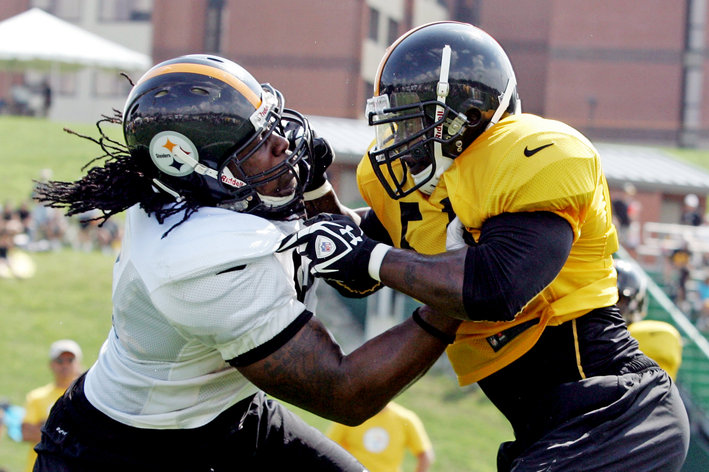 There are a few notable under-the-radar players who had impressive OTAs, writes BTSC's SteelCityRoller

Gilbert's second-round colleague Adams is the better athlete of the two, but Gilbert told Bouchette a doctor "reshaped his foot," and had a torn tendon in his ankle repaired. These could help make Gilbert quicker on his feet - a requisite to zone blocking at the tackle position.

It's still the "blindside" position, though, and one of the more overused cliches in the NFL. While the left tackle's job will still to be handling the best pass rusher an opponent has, the offensive line's ability to get the defensive line to move is the key to the scheme. Quickness and agility are essential.

For the amount of heat Gilbert has taken for battles against gravity last season, it seems he's going out of his way to do something about it. And the extra work appears to have paid off as much as is feasibly possible right now; Gilbert spent the entire three-day session at left tackle, with Adams at right tackle.

It's likely the Steelers will work both Gilbert and Adams out at left tackle at various points before declaring a starter, but Adams looked much better on the right side in his rookie season than on the left.

It's a good problem to have, and certainly, a much better problem than the "lack of tackle" issue the team has had on the left side heading into training camp the last two seasons.