Memorial Day 2013: Putting the holiday and football into perspective

By risking his life and sacrificing his youth, my father helped defend our country and made it possible for his future family to have a better life than the one he endured. So why is it that today, young men have to risk their health by chasing the dream of a violent and high risk NFL career as a means to escaping poverty?

Share All sharing options for: Memorial Day 2013: Putting the holiday and football into perspective

As we learn of the trials and tribulations of the early lives of the Steelers' recent draftees and players and what they have overcome to reach the NFL, we should all take a moment this Memorial Day to remember those who faced similar hardships, and risked far more to achieve what was supposed to be a better life for us all.

The Steelers first set of OTAs have come and gone and we now know a little bit more about the young men the Steelers have drafted. Between now and the first game of the season, these players will become more than just names; we will learn of the poverty, heartache and hardships they triumphed over while growing up to get to where they are today. Some of their stories will make us root for them even as we realize they have little chance to succeed.

Most of us know of Troy Polamalu's efforts at combating poverty resulting from his early life experiences; others recall the wrenching story of Curtis Brown's early life . Brown, the Steelers' third round pick in 2011, was only six weeks old when his mother relinquished her parental responsibility for raising him to his grandmother, but due to the grandmother's poor health the job fell to Brown's aunt who would always be his mother figure. Although they lived on food stamps in a small poverty-stricken town in Texas, they were a close family until his aunt passed away when Brown was in the fourth grade. Brown and his ailing grandmother moved to Gilmore Texas to be closer to relatives and medical facilities for her declining health.

As an elementary school student, Brown had to care for his grandmother during the day both before and after school until a relative could get off work and help out during the night. This lasted until Brown was a seventh grader when he saw his last remaining parental figure placed into a nursing home. As a result, Brown spent the next two years homeless, bouncing from one dis-interested relative to another; a young boy who would break into his grandmother's abandoned home just to have a place to sleep, and to find solace in at least the memories of a family. It wasn't until Brown's father was released from prison that any sense of normalcy returned to his life.

While Brown has to battle for a roster spot on the Steelers, the game of football gave him a way out of poverty. Stories such as his are far too common, and not just among Pittsburgh Steelers or other NFL players; they are heart-rending in what our fellow countrymen and women continue to endure, but heartwarming because of the success some of these athletes have achieved.

Emmanuel Sanders has become the next offseason Mike Wallace 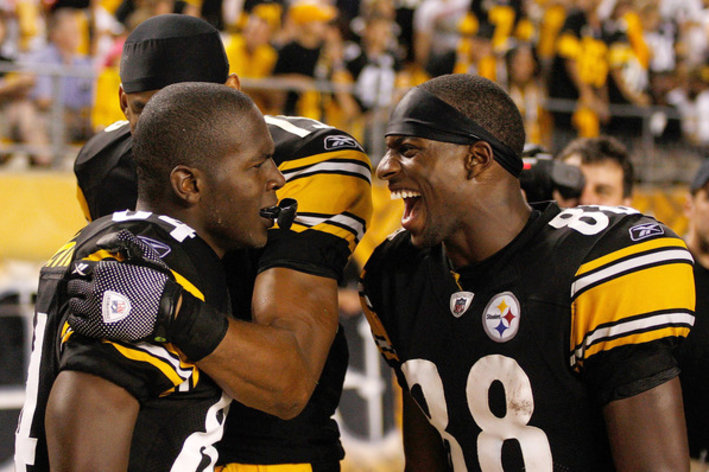 But before we lose ourselves in the "feel good endings" these types of stories engender within us, on this Memorial Day 2013 let us remember and reflect on other young men who endured so much more, and for too many, paid the ultimate sacrifice; our World War II veterans.

Many millions of these young Americans volunteered for military duty recognizing that their country's very existence was at stake. A large number volunteered even before the war began for the U.S. as a means to escape the stranglehold the Great Depression had on millions of people in this country and around the world and was in part a contributor to the conditions that spawned World War II.

That these men risked so much to preserve and re-build a society that today can spend $9 billion watching a game played by men who look to such a game to escape living conditions similar to what these brave veterans went to war to escape is a scarlet letter we all should wear in shame.

Think about that for a minute; many of these men lived childhood lives where their next meal was such an uncertainty, and opportunities to earn enough money for the basic necessities we now take for granted were so few and far between that they risked joining the military on the eve of war to seek a better life.

One such young man made the choice to volunteer as a means to lessen the burden on the rest of his family. He was the youngest of seven children in a poverty stricken area of central Florida. His four brothers would take turns dividing their two meals a day into quarters, giving the two sisters each a share, and a share to the youngest brother, just so those three would have enough to eat to stave off rickets and other diseases brought on by malnutrition.

When my father reached the age of 19, his family's situation had become so dire that he attempted to enlist as a regular in the U.S. Army, Navy and Air Force. He never finished high school; he was constantly looking for work to help earn enough money for his family to survive. Due to childhood diseases brought about by the lack of food and poor living conditions, he was turned down by all but the U.S. Submarine Corps and the American Volunteer Group (the AVG, also known as the "Flying Tigers") serving in remote bases in Burma, India and China. He elected to volunteer to be trained as a weatherman with the AVG, thinking that at least he would be fed three meals a day and could send whatever meager pay he made home to his parents.

From almost the first day of his arrival in-country in 1941, he and 24 other men manned outposts in remote areas of southwestern China where they were tasked with installing, repairing and monitoring meteorological equipment and radioing the information back to the main base in Burma. The equipment they were given to use was required to be installed high up in the mountains far removed from any villages or towns from which they might hope to replenish their supplies.

Foster will step on heads to get the job done

Ramon Foster is the only starting offensive linemen on the team who wasn't drafted in the first two rounds. He wasn't drafted at all. Now, with a new contract, he's looking to step into a leadership role.

My father was taciturn when it came to his experience during the war. My mother once told me that he volunteered to escape the hard life of the Great Depression only to learn what true poverty was like. For the entire four-plus years that he served, he was never afforded an opportunity to take liberty; only three letters from his family ever reached his outpost, and every day he and his small group of fellow volunteers had to rig snares to catch rabbits, rats or squirrels to have enough to eat. The only story he ever told, and told rarely, was how he learned to rock climb, presumably to install the equipment and antennas in advantageous locations, but in reality to make it possible for him to climb up the sides of cliffs to reach bird nests in search of eggs to add variety to their diets.

My father was also a pragmatic man. Upon his discharge, he took advantage of the G.I. Bill and, after acquiring his GED in night school, went on to teach himself calculus in order to get accepted to the University of Michigan where he earned a B.S. in chemical engineering.

It is estimated that there are only approximately 1.2 million men and women left out of the 16 million who served our country so bravely in World War II, the war after the War to end all Wars. While Tom Brokaw so eloquently honored this generation in 1998 with his book "The Greatest Generation", that was fifteen years ago. All of these men, at the height of their physical prowess and on the cusp of manhood, set aside the most vibrant period of their lives that we today so envy and admire in the athletes we follow, and risked their very existence to preserve our way of life, and then those that survived returned home to build the foundation of what our society currently enjoys. Yet the joblessness and hunger that these men endured in their childhoods remains far too prevalent today as the life stories of Polamalu and Brown illustrate.

That these men risked so much to preserve and re-build a society that today can spend $9 billion watching a game played by men who look to such a game to escape living conditions similar to what these brave veterans went to war to escape is a scarlet letter we all should wear in shame.

So, as we all enjoy the traditional Memorial Day holiday with an abundance of food and libations surrounded by family and friends, take a moment not just to honor current and past veterans who made all of this possible, but also to reflect on how and where we have failed collectively in ensuring that the prime years of their youth, let alone millions of their lives that our veterans have willingly sacrificed for our country have not been wasted. Do something; sacrifice something of your own whether it is your time or your money, in some manner large or small for your fellow countryman. A donation to a local food bank, a homeless shelter, a charity run by your favorite player on your favorite team; it matters not what you do, but it matters to the validity of the honor we purport to exhibit towards our veterans this Memorial Day that we all do something for our fellow countryman to ensure that what these men and women of our "Greatest Generation", and indeed veterans of all generations, sacrificed of themselves was not done so in vain and that the game our favorite Steelers play can become just a game, and not a means by which to end another generation's childhood filled with poverty or loneliness.