Spence was injured in the final game of the 2012 pre-season, sustaining a brutal knee injury that threatened his career.

Share All sharing options for: Steelers LB Sean Spence expects to play in 2013

This is a bit of a surprise.

#Steelers LB Sean Spence told @dalegrd (among others) today that he expects to play in 2013 and busted left knee is on the way back.

After all the guessing and back and forth between coaches, the man himself believes he will be back on the field in 2013.

Head Coach Mike Tomlin and Linebackers Coach Keith Butler sparred earlier in the off season over whether or not Spence would ever see the football fiend again, let alone play in the 2013 season. However, Spence seems to believe he will not only play again, but sooner than any of us expected. 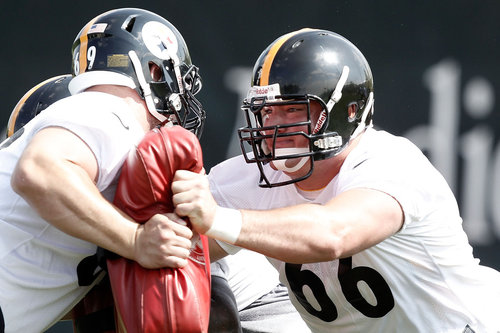 Pittsburgh knew they had found a franchise interior lineman in the first round of the 2012 NFL draft, but did not expect to have to wait a year to benefit from his selection. He is ready to make himself worth the wait.

This has to be good news for the Steelers, who opted not to use a high pick in the 2013 draft on an inside linebacker, and the plan appeared to be to give the 2012 3rd round pick one more year of rehab before the team invested at the position again. If Spence can return to form, he would slot in as one of the primary backups and Larry Foote's eventual replacement opposite Lawrence Timmons.

Even though the Steelers didn't draft an ILB high in the 2013 draft, they did re-sign Stevenson Sylvester to a one-year deal, and drafted Coolong-favorite Vince Williams in the 6th round to establish depth at the position behind starters Foote and Timmons.

I appreciate Spence's optimism and hope he does return to the field this year, even if it is to just work with the practice team (and return to full-form in 2014), but I am going to wait for him to join the Steelers in "football in shorts" before I get too excited about him covering tight ends down the field in December.