Wheaton, the Steelers' third round pick, is a player to watch this weekend. The speed in which he can grasp this offense will determine how much he could play this season.

We've mentioned how he's more than that, though. Imagine that, a receiver who's more than just deep speed.

Wallace can't be replaced, but the dynamic of the Steelers offense can be changed for the better. As the Steelers rookie camp is underway in Pittsburgh, Wheaton could be the rookie who receives the most playing time this season, largely due to his skill and precision on slant and dig routes.

Unfortunately, he's also the rookie who will miss the Steelers' full team minicamps scheduled May 21-23, May 28-30 and June 3-6 due to the dreaded rule that doesn't allow rookies to work with their teams until their college has graduated. He will participate in this weekend's minicamp, though. 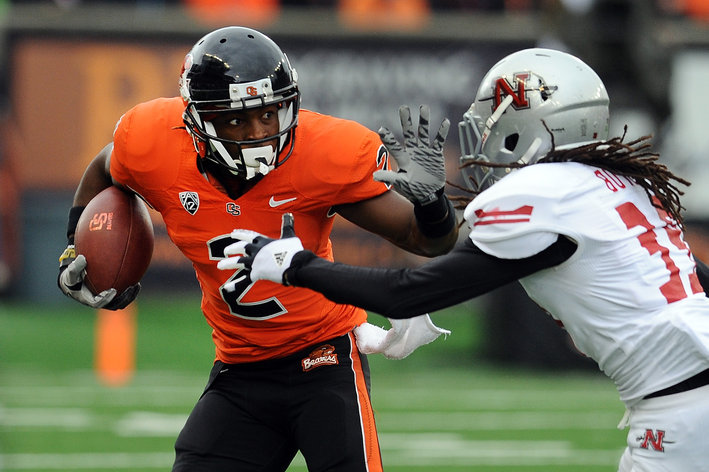 The Steelers may have gotten a steal out of third round pick Markus Wheaton, writes BTSC's Neal Coolong

Working within the structure of Todd Haley's offense, Wheaton's physicality will be just as much an asset as his speed will be. He can get inside defensive backs, who are forced to respect his speed to the outside. He does a great job of keeping himself between the defender and the ball, and gives the quarterback a target to hit while still allowing himself the leverage of the angle to turn up field and make plays.

The Steelers will see exactly what they have with Wheaton in minicamp, and how they use his versatility and underrated skills as a pass catcher. When paired with Antonio Brown, the Steelers will have two receivers who are adept at running underneath routes while still having the ability to stretch the seam.