Cap Space? We don't need no stinking cap space? At least John Clayton doesn't think so, as he expects Breaston to sign with Steelers soon.

If you've ever come home on a payday, only to find your significant other had it spent before you ever got there; then you know how some Pittsburgh Steelers might be feeling about the remainder of the off-season.

According to John Clayton of ESPN, the Steelers are already spending the cap space they expect to clear when Willie Colon's contract officially comes off the books. Clayton expects the Steelers to sign former Arizona Cardinals and Kansas City Chiefs receiver Steve Breaston in the next few weeks. 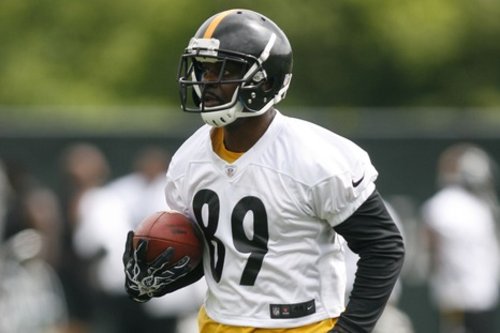 Signing Breaston would throw yet another hat into a crowded, young ring.

Considering the Steelers don't technically have enough cap space remaining to sign an undrafted rookie's minimum salary of $405k except for the rules of displacement; either Breaston will sign before June 1st for a veteran minimum base, or he will sign a more veteran worthy deal once Colon's money clears on June 2nd. Expect the latter.

When Breaston visited the Steelers earlier this preseason, but left without a contract; many speculated his rejection revolved around inflammation of an arthritic knee condition which would require special treatment - which he declined. Evidently, the team has decided to gamble on his recovery.

Even if his body is unable to secure a job in training camp, the team still wins for the veteran mouth Breaston will put in the ear of younger men, like rookies Markus Wheaton and Reggie Dunn. Breaston played in Todd Haley's offense with both of his prior teams, and will provide a mentor to those still learning the system.

Pittsburgh will still need to sign their draft class with Colon's clearance, but are still expected to have roughly $2.5 million in cap space to play with. If Clayton's prediction pans out, and the team signs Breaston, they can afford it; but he will reduce their chances of bringing in other veterans in other positions.

If they sign Breaston, and he can play at 100%; the signing really would be a win-win for the Steelers who are in need of a slot receiver - coincidentally, Breaston's specialty.