Is There Really Gold in Them Thar Hills?

Have teams like the Steelers, the Ravens, and the Patriots really found a way to identify better-than-average players in the lower rounds of the NFL Draft? (Part III in a series.)

Share All sharing options for: Is There Really Gold in Them Thar Hills?

In my two previous articles, AFC North Drafting etc. and Does Crime Pay in the NFL Draft? I explored a couple of aspects of the draft history of the Steelers and Patriots (in the second article) and the whole AFC North (in the first). This article looks more closely at the idea that some teams are particularly skilled at finding good players cheaply—in other words, in the lower rounds. During the previous decade the Patriots, Steelers, and Ravens have been generally considered to excel at this. Does the data support this?

As I have done in the other articles, I have separated out the data in such a way to demonstrate not just how well a given team drafted but how much of their draftees' value accrued to the team drafting them. This becomes even more critical with shorter rookie contracts, since, generally speaking, lower round draft picks are projects. If you want an explanation of the methodology, it is in the first article linked above.

Now let's look at the data. As usual, it comes from the fine folks at Pro Football Reference.

First, let's compare the overall performance of the five teams in question to the league average. The chart below encompasses the drafts from 2001 - 2012: 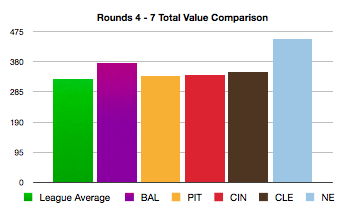 Interestingly, when we look at just Rounds 4 - 7 all of the AFC North teams at least slightly bested the league average. The clear winner is, of course, New England, but the Ravens were the best in the AFC North, the Steelers the worst.

Now have a look at how much value the drafting team actually extracted from the players: 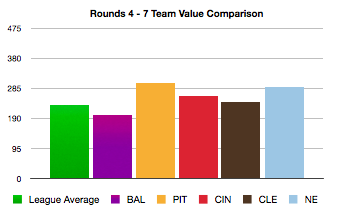 All of a sudden the equation changes dramatically. Although the Steelers didn't necessarily draft the greatest number of talented players, they apparently were better overall in figuring out what they had in the ones who panned out and keeping them. The Ravens, on the other hand, appear to be excellent at evaluating talent prior to the draft and not as good at holding onto it, at least in the lower rounds, and the same could be said of the Patriots.

Let's look at the rounds individually, as some interesting things emerge when we do so:

For ease of comparison I've put both the total value (the right half of the chart) and the team value (the left half) on the same chart. The green bars are always the league average, the purple bars the Ravens, and etc. Since 2001 the Steelers, the Patriots, and, curiously, the Bengals have done very well in the fourth round. Also curiously, the Browns have bested the Ravens, although not the league average. But as we saw in the previous article, the trouble with the lower rounds is that it is basically boom or bust. Does this hold true?

Let's look at the Patriots in detail, since they had the greatest total production. The actual numbers look like this:

It was really interesting to me how both the number and the quality of the fourth round picks has declined for New England. (The asterisk, BTW, is for kicker Stephen Gostkowski, who gets no love from PFR in terms of Approximate Value points but has obviously been a fruitful addition to the team.) Since 2005, the Patriots have only drafted a single well-above-average player other than Gostkowski, and perhaps Bill Belichick has noticed this, because he has traded out of the fourth round altogether the past two years.

Let's also look at the numbers for Cincinnati, since they have done so well:

Their impressive production has sometimes been from multiple picks, sometimes from a single pick, and despite their high total they had two years without a pick at all in this round. Their 16 picks over this time span is matched by, curiously, Cleveland and Baltimore. The Ravens and Browns just didn't manage to do much with the picks they had, which is certainly uncharacteristic of Ozzie Newsome. The Patriots, as you can see, had 15 picks, and the Steelers had only 12. One of those 12 was Daniel Sepuveda, who also gets no Approximate Value points from PFR. If we look at the chart again, adjusted for value per pick, the chart looks rather different:

We now see that Cincinnati's impressive showing was at least partially an artifact of their large number of picks. If we only consider the left set of bars (value accrued on the team,) the Steelers dominated the fourth round. Sweet!

Note that the chart tops out at 150, instead of the 200 of Round 4. Round 5 is owned by Ozzie Newsome. The Steelers, on the other hand, aren't as bad as the Bengals, and the Browns look really good. Let's adjust now for number of picks:

When we adjust for number of picks Cleveland looks better, the Ravens don't look as impressive, Pittsburgh looks worse, and the Bengals have no hope. They should, like New England in the fourth round, just not bother, at least based on the historical data.

Note that the maximum value at the top of the chart is now 120 instead of 150 for Round 5. Now for the adjustments—you know the drill:

Cincinnati shines in Round 6, fortunately for them. Finally—

The charts for the last three rounds all max out at a value of 120. Notice how much you lose when adjusting for the number of picks. Most teams seem to have multiple later-round picks.

So in closing let's have another look at the first charts, this time adjusted for the number of picks: 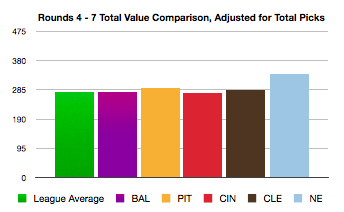 Interestingly, when we look at the comparison this way, most everyone except the Patriots sit right around the league average. (The league average, in case you are wondering, was adjusted for the total number of picks as well.) 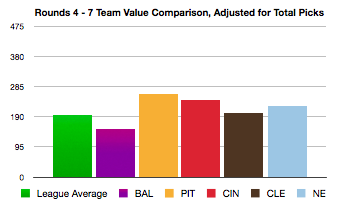 Interestingly, it seems if you are considering the players who have actually benefited the drafting team the Steelers come out the best overall. In case you would like the actual numbers, the Browns were essentially at the league average (2% over, about the margin of error.) The Ravens were substantially under—the WCAV accumulated on the team was about 76% of the league average. The Patriots did about 13% better than the average; the Bengals were about 24% better, and the Steelers came in at 32% over the average, which is substantial. While the Steelers didn't really dominate any round except Round 4, sort of, overall their drafting in the lower rounds has been solid if unspectacular. Sort of like the team itself.

So in theory if you want a fantastic group of picks from the lower rounds and you wish to impress people with their studliness you could get Bill Belichick to draft for you in every round except the sixth—get Marvin Lewis and the Bengals' staff to help you with that one.

Oh, and don't forget, past performance is no guarantee of future results : )