If Mr. Rosenthal is correct, and Wheaton beats out Sanders for the starting spot opposite Brown; should the Steelers have let Sanders go to the Patriots?

Share All sharing options for: Rosenthal believes Wheaton will compete with Sanders for Steelers starting spot

Hindsight is always 20/20. In late August, an error by the Pittsburgh Steelers in April may become crystal clear.

In NFL.com's Around The Leage: Draft Fallout series, writer Greg Rosenthal discussed his belief the Steelers 2013 draft class could have the biggest impact on the upcoming regular season. However, one note in his report may cross the line between anxious anticipation, and lofty expectation.

The Steelers will let Markus Wheaton compete with Emmanuel Sanders for a starting job, but that's a long shot. Wheaton's ability to play in the slot and on the outside should get him on the field plenty. I expect the rookie to play more than Jerricho Cotchery and Plaxico Burress.

Steeler Nation is slowly growing on Wheaton, as further analysis shows he will be a perfect fit for Todd Haley's quick-hit offense. However, since the draft, most hopes fell in line with Wheaton landing the slot duties behind Sanders and Antonio Brown. Now, Rosenthal is suggesting Wheaton could surpass Sanders by the start of his rookie year. He does call it a long shot, but no Steelers fan would mind seeing their third-round pick produce at a starter's level.

Sanders had signed an offer sheet with the New England Patriots prior to the draft, which would increase his pay to $2.5 million for the 2013 season, as opposed to the $1.323 million of the RFA tender he was offered by the Steelers. Had Pittsburgh allowed Sanders to sign with New England, the Patriots would have owed the Steelers a third-round draft pick as compensation for signing away their restricted free-agent.

Fast-forward today, when we're honestly discussing a third-round pick winning a starting job before our first- and second-round picks. With the super-power of hindsight, should Pittsburgh have let him go? What overachieving prospect could have been found with the extra selection?

This retrospective regret only applies if Wheaton were to beat out Sanders in camp. The offense will still be better off having Sanders to continue playing the slot, but with Cotchery, Burress and a stable full of young men wanting to prove themselves, they certainly could have lived without him had they known Wheaton would fall into their laps. 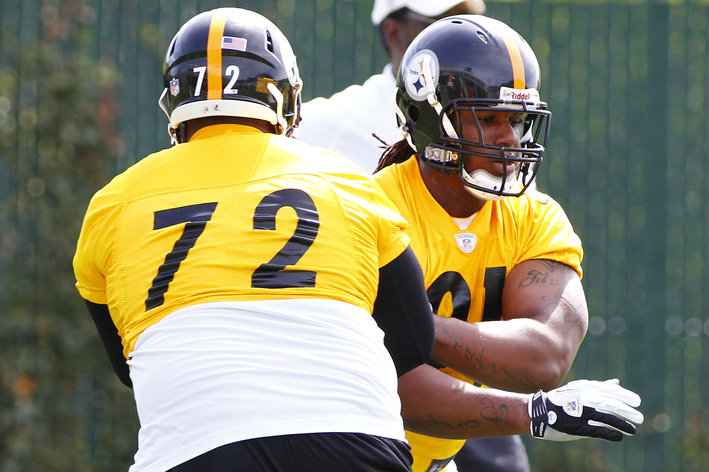 All the more reason to lower Wheaton's bar, and hope he can fill the slot role as a rookie. If he impresses, he can take over for Sanders who would be allowed to leave as an unrestricted free agent in 2014. Although, even this scenario is rather impressive for a third-round selection. Making the surrendered third-round pick by saving Sanders for one season feel even more valuable.

No matter how the situation plays out, the Steelers only interest lies in fielding the best team possible with what they have to work with. Any production by Wheaton will benefit their cause, which is exactly why they drafted him.