Searching for the Steelers' next rookie cult hero

Isaac Redman, an undrafted free agent running back out of Bowie State, achieved cult hero status among fans a few years ago for his preseason "Redzone" prowess. What non-first round rookie will be 2013's cult hero? LeVeon Bell? Markus Wheaton? Maybe even Mike Golic Jr.?

Share All sharing options for: Searching for the Steelers' next rookie cult hero

After an event like the just concluded Steelers 2013 rookie camp, it's quite common to speculate on who looked good and who looked bad over the weekend. It's never fun being the new guy at work, and when you have an entire group of young football players gathered together in an NFL camp, it's only natural that some will show immediate promise, while some will walk around with a "deer in the headlights" look on their face.

But this post isn't about that. No, this post is about two and a half months from now, after these rookies go through minicamp and OTAs and come out on the other side in Latrobe in late July.

These young men may not know it yet, but at least one of them will become a Steeler Nation cult hero. A cult hero is a rookie who isn't a first round pick, but walks into stardom and becomes a fan favorite based on his name, his physical attributes, or simply because of the position he plays. The adulation for this man becomes so rabid, he achieves almost rock star status (at least on the Internet). 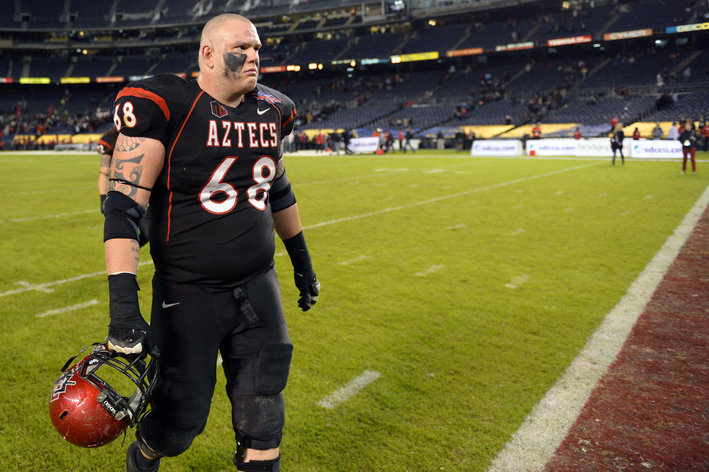 Undrafted free agent Nic Embernate looks to earn a roster spot in the first season the Steelers haven't drafted an offensive lineman since 2003.

And that's why I've decided to sort of handicap some of the rookies who may have the best chance of becoming "the 2013 Isaac Redman Cult Hero." Yes, I've decided to name this award after the undrafted free agent running back out of Bowie State, because, really, no Steelers player in recent memory has reached such heights as "Redzone Redman" (at least on the Internet). 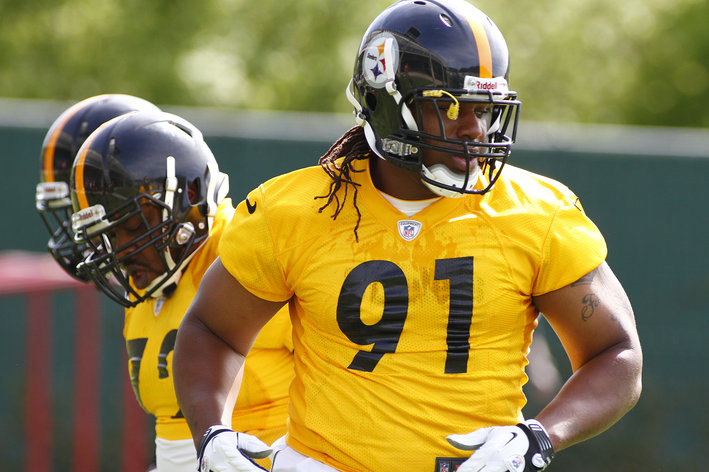 Steelers seventh round draft pick Nick Williams has had the right connections around him. And the Steelers are glad he did, writes BTSC's Neal Coolong.

Now that that's out of the way, let's begin forecasting who will be this year's most interesting rookie:

Just like first round picks, second round selections don't normally achieve a cult following, but Bell is a running back, and this is Pittsburgh. And not only is he a running back, he's one who runs tough, runs over people and really isn't that fast--attributes Steelers fans find attractive in any running back.

Because backs the caliber of Eddie Lacy were still on the board, Bell was a bit of a controversial pick on Day 2 of the draft. In fact, there has been so much discussion about Bell since the draft, you would think he was the number one pick and not Jones. Those on board with the pick love Bell and his style. Those who aren't crazy about the pick will quickly get on board because, at the end of the day, Bell is a running back, and this is Pittsburgh.

Mr. Bell, you have a chance to succeed where other tantalizing rookie running backs--Jonathan Dwyer, Baron Batch and Chris Rainey--have failed. Pound that rock into the heart of Steeler Nation.

Wheaton may be receiving the most universal love, early on. And if I had to pick a reason, it's probably because the third round pick isn't Mike Wallace--a wonderful attribute fans are simply delighted in. However, young Mr. Wheaton needs to beware because there was a time when the fans loved Wallace because he wasn't Santonio Holmes. And before that, we loved Holmes because he wasn't Plaxico Burress. Let's face it, receivers naturally have diva-like qualities (I believe it's written in their DNA), and are like the noisy lawnmowers to the Steeler fans nest of angry bees--in other words, if you wear an 80-something number on your jersey (or Heaven forbid, 11, you damn diva!), it doesn't take much to irritate us.

So, Mr. Wheaton, I'd advise you to stay as humble as you appear to be. If you have dance moves, don't do them. If you have nicknames, don't use them--unless it's one given to you by a fan, like Rebecca Rollett's "Cash Back" (but I don't have to tell you how a name like that could come back to haunt you during a contract year).

So, stay on your toes. Work hard. Break up potential INTs. If you're running for an uncontested touchdown, for God's sake, don't turn around and show the football to the helpless defenders.

And lastly, whenever possible, block! Block! Block like the wind, Markus!

Even though he's not a running back, Thomas, a hard-hitting safety who was only a fourth round pick but would have been drafted earlier if his height (5'9) was a bit higher, may have the best chance to be a cult hero. Thomas hits very, very hard. I mean, we're talking HARD! He's also tough and often plays out of control.

I love this kid, " NFL.com analyst Mike Mayock said. "You talk about the Steelers picking tough guys. This guy reminds me of Bob Sanders. He's undersized but plays like a human missile."

A human missile, or is he a torpedo? Or how about a shark? I am kind of miffed because I wanted to be the first to call Shamarko "Sharko" Thomas, but some other Steelers fan(s) beat me to it. Perhaps, I can be the first fan to coin "Sham-wow!" in honor of the late Bill Mays. Maybe Thomas is really good at absorbing the playbook. Maybe he'll be good at absorbing the souls of receivers who dare to catch a pass in his area.

Having said all that, Mr. Thomas, you're a safety from Syracuse. And much like any Steelers linebacker drafted since Alonzo Jackson, it's only natural that you're going to draw comparisons to Anthony Smith, a safety Pittsburgh drafted out of Syracuse in 2006. Smith was hard-hitting and tough, and he often played out of control.

He was also undisciplined, so much so, in fact, he was actually chewed out on the sidelines by Dick Lebeau during his rookie year after he intercepted a pass against Carolina and high-stepped his way out of bounds. Being publicly chastised by Coach Dad is like Mr. Rogers telling a kid that it really isn't okay to be sad and scared, sometimes.

But that's neither here nor there. Unfortunately, neither was Smith, who was often out of position. That's right, Bill Belichick, there have been better safeties than Anthony Smith.

Don't be another Anthony Smith.

Jones was Pittsburgh's second pick of the fourth round and probably the most questionable, at least in terms of "Why did the Steelers draft such a productive college quarterback? Are they trying to replace Big Ben?" Some fans seem to think so, and maybe not since the days of Kordell Stewart, some fans might actually hope so (you know who you are).

Since Roethlisberger has been in the league, there haven't been many calls for finding his replacement. But it has been a couple of years since the Steelers made the Super Bowl, and Big Ben is only getting older. Besides that, he takes too many hits, doesn't throw the football away enough and probably wants to fist-fight Todd Haley.

The time may be right for a coup. The king is dead! Long live the king!

So, young Mr. Jones, forget about your apparent mediocre rookie camp. Study. Stay focused and whenever the camera is on you, make sure you're looking at those Polaroid pictures they always show every quarterback but Roethlisberger studying in-between offensive possessions.

Forget cult hero. You have no idea the martyr-like status you could achieve with one or two fourth quarter performances in the preseason.

If there is one thing the Steelers have always been in search of, it's a GOOD, tall receiver. Oh, we've had some tall receivers in Pittsburgh, but they've usually been named Limas Sweed.

I mean, let's face it, unless a Steelers receiver is 6'1 or shorter, it's almost impossible for him to be named Super Bowl MVP.

Mr. Brown, at 6'3, 209, you have no idea the opportunity that is just waiting for you. We're so starved for a big, dominating receiver who can catch a fade pass or shield a defender with his stature that we were actually intrigued by 6'8 Wes Lyons a couple of years ago.

"How did Wes Lyons look today in camp?" fans often asked two or three Julys ago.

The fact that you were a sixth round selection can only help your cult-status, Mr. Brown. Sure, with your 4.6 time in the 40, you're not considered "fast," but we don't care about that. It's all about the height.

Use your height to reach for the stars!

Those are just some of the cult hero contenders from the rookie class of 2013. No, I didn't include cornerback Terry Hawthorne (fifth round), linebacker Vince Williams (second pick, sixth round) and defensive tackle Nick Williams (seventh round), but that should only add to their under-the-radar camp cache.

This just in. Mike Golic Jr., a guard/center out of Notre Dame who was signed by the Steelers as an UDFA, was named one of the best of the undrafted bunch.

Move over Markus and Shamarko. I think we may have the leading candidate.