Steelers take opposite approach with offensive line rookies in draft

Pittsburgh has looked to mid-to-late round draft picks to find offensive line depth. In fact, 2013 was the first draft in the last 10 where the Steelers did not select an offensive lineman. They may have two undrafted linemen they can develop for the depth the line currently lacks.

Share All sharing options for: Steelers take opposite approach with offensive line rookies in draft

It's a reasonable question to wonder what the Steelers intend to do about what seems like sagging depth along their offensive line.

After having drafted at least one offensive linemen - and oftentimes two or more - in every draft since 2003, the Steelers did not select one in the 2013 NFL Draft. They released Willie Colon this offseason, and appear set to go with Mike Adams and Marcus Gilbert as their starting tackles, Ramon Foster and David DeCastro as their guards and Maurkice Pouncey as their center. Kelvin Beachum will provide depth to at least two, if not all five of those positions.

Searching for the next Steelers Cult Hero

BTSC's Anthony Defeo scrolls through the candidates who will become beloved by Steeler Nation at some point this offseason.

Who else is there?

Basically, no one with pro experience. But perhaps the rookie pairing of OT Mike Golic Jr. and OG Nik Embernate - both undrafted free agents who just finished their first rookie camp with the team - have some staying power.

They both fit in with two traits that befit the Steelers' 2013 Draft class. They're both highly experienced and they're both leaders. Golic started 13 games at right guard for the Irish in 2013, and played in 12 others as a reserve in 2012. He finished his football career in South Bend as a graduate student, and earned Academic All-America honors.

Embernate has 33 career starts at right guard, and the pedigree of a brawler. In an interview with the San Diego Union-Tribune, he spoke about power running plays.

"If I hear a quarterback call that play in the huddle," Embernate said, "I've already got in my mind that I'm going to take that dude and slam him into the dirt, and as he's trying to get up, just not let him get up. Try to inflict a lot of pain on him.

"That's what this game is all about - not to the aspect where you want to hurt somebody, but you're going to try to knock somebody out. You've got to play physical."

This is the same Embernate - the son of a cop/bodyguard - who was ejected from a game as a freshman at San Diego State for landing an uppercut on an opposing player who, apparently, was kicking him.

Sign him as an undrafted free agent, give him a chance to use that experience and aggression on the field, but don't mess with Embernasty. 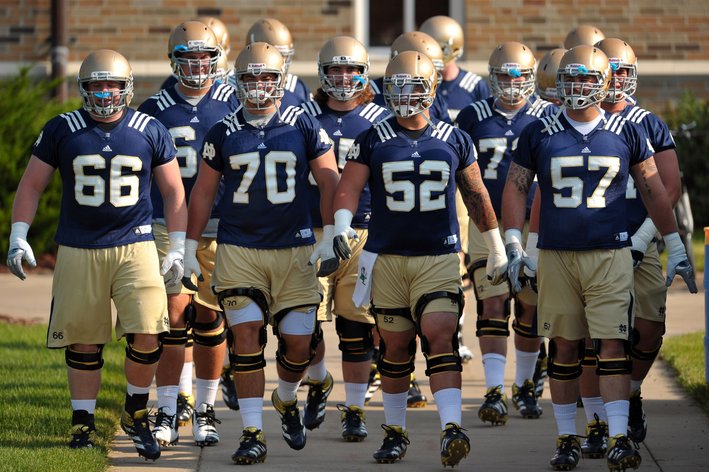 Mike Golic was named by National Football Post as one of the top undrafted rookies in this class.

The Steelers have gone the completely opposite direction than they have in the past; signing UDFAs instead of drafting them in the later rounds, hoping they'd develop. Beachum started six games for the Steelers last year. Chris Kemoeatu was a sixth-round pick out of Utah in 2005, and ended up starting for the Steelers for four seasons. There's a slew of Keith Williams and Cameron Stephensons in that wake, but the Steelers are hoping to get guys who can stick now, like they did with Beachum last year.

The backgrounds of Golic and Embernate suggest they could be the right kinds of guys for the Steelers.

Whether they were draft picks or not.