What’s in a name? A Look at the meaning behind some of the names on the Steelers’ roster

Does the name fit the man, or does the man grow into his name? A search into the meanings behind the names on the Steelers’ roster brings some interesting things to light.

Share All sharing options for: What’s in a name? A Look at the meaning behind some of the names on the Steelers’ roster

There is power in words. Words can heal or inspire, as well as hurt. From the earliest days of human society until today, man has given words and more specifically names power; early man attached names to everything he observed around him, and by assigning names hoped to gain an understanding and control of both his environment and himself.

Names have the power to influence perception, and in man perception is reality. From military planes named after fierce birds of prey (F15 Strike Eagle, F16 Fighting Falcon, F22 Raptor) to football teams named after predatory animals (Chicago Bears, Jacksonville Jaguars, Cincinnati Bengals) or fierce heritages or myths (Minnesota Vikings, Tennessee Titans), man imbues words with the power to instill a visceral reaction or meaning, and over time those words become so closely associated to objects or actions or things by so many people that the name becomes the identifying word or action word (think Kleenex for tissues, or Xerox to copy something or Coke generically for soda).

Anthroponomastics is the study of the personal names of human beings. This field delves into a myriad of aspects of people's names ranging from what they called themselves, to what others called them in reference to the geographical area the subject peoples were believed to be from, to how individuals came to be known by the occupation they filled, or the role they played in early society.

Steeler Nation knows the story behind the team it loves; how its owner won the money to purchase the team during an incredible day betting at the horse track; how the team chose its name from a contest submission by a local steel worker. And no discussion of Steelers' lore is complete without reference to the greatest name for the most singular play in sports history: the Immaculate Reception.

As a lark during these dead days before training camp, I decided to download the Steelers entire 2013 roster, and, after adding the owner, head coach and both coordinators to the list, began a basic search of their Given (first) and Surnames (last) to see what powers or influences these names have instilled in the men who make up our Pittsburgh Steelers, or to see if they live up to their names.

What I found was an interesting coincidence (?) between the characteristics we see in some of the players and coaches and their names, and a coincidental (?) confluence between the positions or roles they play on the team and the name on the back of their jerseys.

Ben Roethlisberger would play in Dublin for Dan Rooney 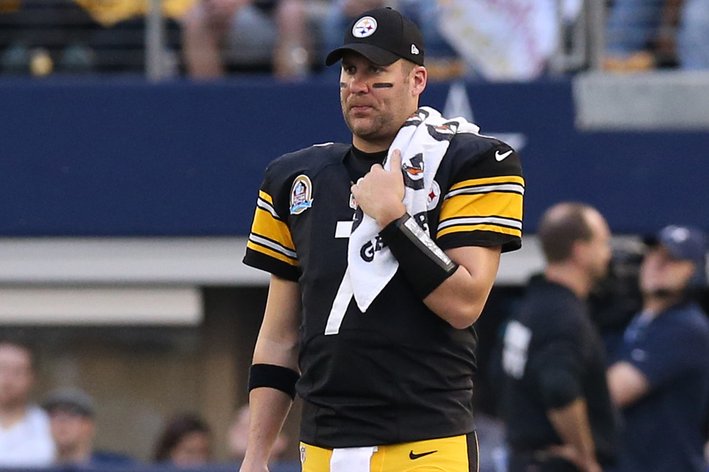 An easy example of this is Steelers' President and co-owner Art Rooney II, the grandson of Steelers founder Art "The Chief" Rooney. As the President of the Steelers' organization, Art Rooney II brought about the highly complicated ownership change that kept control of the team in the hands of the Rooney family, but brought the ownership structure into compliance with NFL League rules. Dealing with a multitude of family members and having to find outside partners who would not inject ownership controversy or drama into what is regarded as one of the premier organizations in all of sports required an extremely strong but stable and resolute personality.

The name "Art" is a diminutive of "Arthur" which in Irish Gaelic means "rock, or noble strength, a bear". The name Rooney in Irish Gaelic is spelled "Ruanaidh" and itself means "descendent of a champion (or hero) of the clan". Thus, Steeler Nation has the grandson of its hero, "The Chief", showing great strength and nobleness in preserving and operating the Steelers organization.

Then you have Troy Polamalu. Given his rare abilities and singular level of excellence by which he plays the game, it is not hard to believe that when you type "what does Polamalu mean" into Google, you get a web definition of the player himself.

The name "Troy" is interesting. In Irish (the Rooney connection to this Steelers player) the name "Troy" can mean "foot solder"; given some of the amazing feats he's accomplished on the field, it should be more like "Special Forces foot soldier", but you see the connection. Ironically, this individual is of Samoan descent; Samoa, being part of Polynesia in the South Pacific, has a history of French cultural influence, and in French, the name Troy means "curly haired".

Thus, the Steelers' highly ranked defense has in its backfield a man whose very name defines two traits that have made him famous; his warrior like actions on the field, and the hair on his head.

So Steeler Nation, the grandson of the head of the local clan and founding hero who named our favorite team in honor of the men and women who worked in the industry that made Pittsburgh a household name, has under his employ the following men (see if you can guess who they are; answers at bottom):

A leader who has a reputation for being "crafty like a fox" in designing offensive plays and who has playing for him;

a guard who is "a wise or mighty protector";

another guard who is "one who was considered small of stature"

a tackle who is "warlike" but has to "pledge" not to "hammer" any more of his teammates;

a tight end whose return to the roster is a "gift of god" but is "one who always came late";

a fullback who is a "determined protector".

a handsome man who is a strong powerful leader who has secondary players who are;

a little leader who is a journalist;

a proud and fierce shining ray of light;

a courteous defender who dwells in the green open field;

a light-hearted resolute protector, and

a defensive end who might be a "mad, eccentric or violent person".