Will new faces lead to an improved defense for the 2013 Steelers?

Some pundits like Warren Sapp are claiming that the Steelers defense is "old and slow" and will decline in play. Other pundits in the national media claim that the defense will find it hard to replace the loss of three starters. What if both are wrong? What if I told you that there are young players likely to have increased playing time in Pittsburgh's defense? What if I told you their contributions will help bring the defense back to dominance?

Share All sharing options for: Will new faces lead to an improved defense for the 2013 Steelers?

In the 2013 off-season the Steelers defense saw its most significant roster changes since Mike Tomlin took over as head coach in 2007. Pittsburgh will have at least three new defensive starters by the start of the season. Choosing to sign Steve McLendon to a contract signaled the team parting ways with Casey Hampton. The Steelers didn't offer cornerback Keenan Lewis, who was a free agent, a contract and the cut outside linebacker James Harrison due to salary cap issues. That kind of turnover is rarely good for a defense. There is however three young players whose play last year, albeit in limited snaps, has me convinced they will help improve Pittsburgh defense in 2013.

Cameron Heyward was Pittsburgh's first round draft pick in 2011. Like most Steelers rookies he spent much of that season on the bench behind veterans Brett Keisel and former first round pick Ziggy Hood. Heyward did show some pass rush ability as a rookie though posting one sack, four hits and seven pressures in a very small number of snaps. In 2012 he saw his snap count increase and manage to play 270 snaps by the end of the year. When looking at Heyward there are two questions that should be asked. How did Heyward play overall last year and did he play better than Hood?

Heyward's overall play last year was fairly good given his limited snap count. He recorded 20 tackles and 1.5 sacks. Despite his limited snaps there were a few games were Heyward stood out .Early in the season spelling Hood Heyward showed he was a better pass rusher than Hood but where he stood out was against the Ravens in Week 11. After Ziggy went out with an injury Heyward came into play, he recorded two tackles, a hit and two hurries in that game. His best game however was against the Week 17 match-up against the Browns. Heyward look dominate at the LE position against John Greco. He recorded four tackles, two stops, two pressures and a half a sack while controlling his man along the line of scrimmage. His performance was so good against the Browns Pro Football Focus named Cameron Heyward to their Team of the Week for Week 17 giving him a +5.9 grade. He does have some work to do. His hand placement needs work as he will put his hands on the outside of the blocker too often and he also had a tendency of trying to make a play and leaving his gap assignment to do so.

Based on his performance in 2012 Heyward did a lot to justify an increase in snaps for 2013. In fact it wouldn't be surprising, by the end of 2013, to see Heyward starting - whether that's because of performance or due to injury.

That will create an interesting problem for the Steelers at the end of this season. Hood, the starting defensive end on the left side, will no longer be under contract and has disappointed so far in his career. Brett Keisel will be 35 years old and is also in the final year of his contract. Even back-up defensive end Al Woods is not signed beyond 2013. Pittsburgh needs Cameron Heyward to play like he did against the Browns to help limit their need at defensive end after the year.

Steve McLendon found his way to Pittsburgh in 2009 as an undrafted free agent. Spending his first two years switching back and forth from the roster to the practice squad McLendon was rarely a factor. In 2011 though McLendon switch from a back-up defensive end to a back defensive tackle and began being mentored for the position by Chris Hoke. In 2011 he had his break out game against the Arizona Cardinals starting in place of an injured Casey Hampton. It was a great game for McLendon who notched four defensive stops (five tackles total) and a pressure. The 2012 season however wasn't the breakout year many had predicted. His 139 snaps were actually less than his the previous year total of 220. Despite this low number of snaps McLendon made the most of his play recording seven tackles, six pressures, two sacks, two tackles-for-loss and a forced fumble. The Steelers have showed confidence in him signing him to a 3-year deal worth $7.25 million. While many fans may question this signing McLendon could prove to be great value in the middle of the defensive line.

Steelers Film Breakdown: McLendon is who we thought he was 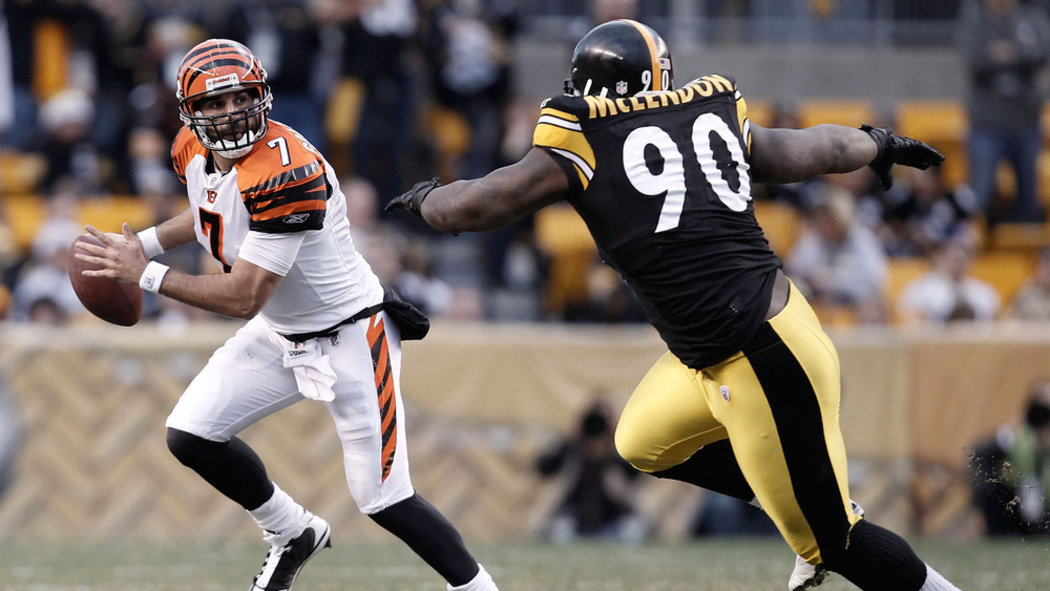 McLendon isn't the same type of player as Hampton was. He possesses above average strength but also has the quickness of a smaller defensive tackle. McLendon had flashes throughout the season especially as a pass rusher. Against the Ravens he showed the speed to beat the backside cut block that was so effective against Hampton. He also was taken advantage of a few times by Nick Mangold of the Jets.

His best game in 2012 though came in Pittsburgh's final game Week 17 against the Cleveland Browns. Going up against Alex Mack one of the top centers in the league, McLendon had one sack and one QB hit on six pass rushing snaps. In his other five snaps he battled with Mack against the run getting the better of him a few times. McLendon still has some work to do, he needs to improve consistency off the line because at times he is too slow, he needs to improve his awareness of what the linebackers are doing behind him and he also needs to improve his hand usage because he will let the offensive linemen into him too often. Even with these flaws McLendon with his superb quickness as well as deceptive power should help improve the Steelers defense at the NT position.

The 24-year-old Allen may be the most exciting of the younger players who will be starting on this defense. The fourth round draft pick in 2011 development was hampered slightly his rookie year due to injury in training camp. In his rookie year he only saw 46 snaps on defense. He finished the year without a pass break-up on the stat sheet and allowing a reception on 81.8% of his targets. However he didn't allow a touchdown, wasn't beat deep and was excellent in preventing Yards after the Catch.

In the 2012 pre-season Steeler Nation got a glimpse of what Allen could become. In the four preseason games he had four pass break-ups and an interception. During the 2012 season Allen began to build on his play. He had 563 defensive snaps with 288 of those coming in the slot and there was a complete 360 degree turn around from his stats in his rookie year as he only allowed a reception on 60.5 percent of his targets. It wasn't until he had to fill in for Ike Taylor on the outside did Steeler Nation get to see that he could be something special.

Using his length to his advantage he allowed a reception on only 55.9 percent of his targets. In Week 16 against the Cincinnati Bengals he had his statement game. Filling in for Ike Taylor, Allen had three pass break-ups and two interceptions and forced a fumble. In the final game against Cleveland Allen again showed his nose for the football forcing two more fumbles.

As he moves into his new starting role Steeler Nation should be excited about Allen. In 2012 Allen got his hands on one out of every seven pass thrown into his coverage while playing in the slot for the majority of the season. His 68.5 passer rating against was 10th best in the league. If the last two games are any indication, he may be even better as a full time starter on the outside.

If their play at the end of last season is any indication, the Steelers should be helped by its new faces on the defense. Of the players expected to get more snaps in 2013, who do you believe will help Pittsburgh the most on defense?