Is Maurkice Pouncey the next Mendenhall?

In what could prove to be a very divisive wardrobe choice, Steelers Center Maurkice Pouncey was photographed at a birthday party for him and his twin brother Mike of the Miami Dolphins sporting a “Free Hernandez” ball cap.

Share All sharing options for: Is Maurkice Pouncey the next Mendenhall?

Aaron Hernandez, the former New England Patriots TE is currently in solitary confinement in a Bristol CT jail charged with the murder of Odin Llyod, the boyfriend of Hernandez fiancé's sister, and is under investigation for other unsolved murders. 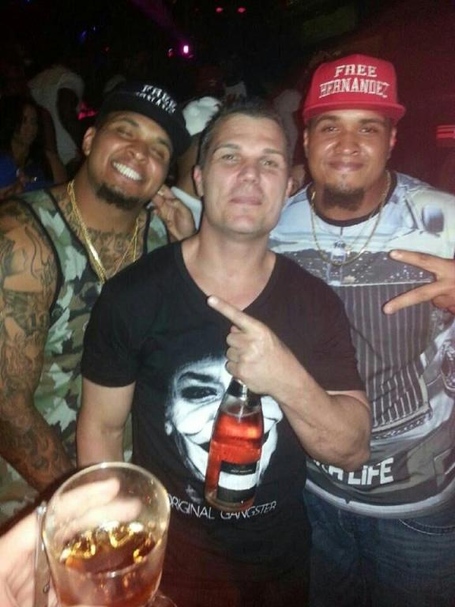 Simply having fun, or making a statement?

The question remains exactly what kind of statement Pouncey may have been trying to make with his choice of headwear, if any. However, just as Rashard Mendenhall incurred the wrath of Americans in 2011 with his tweets questioning whether an airplane could in reality bring down the World Trade Center buildings and as a result lost millions in endorsement contracts, Pouncey is courting a similar backlash.

On one hand, he may simply have been trying to express support for his former Florida Gators teammate, but given the gravity of the crime with which Hernandez has been charged, the unearthing of potentially other crimes he may have been involved in, his history of troubles with the law and his reputation, Pouncey may have been better served keeping his support private, especially considering the fact that the last player Pouncey publicly supported, Chris Rainey, is no longer a Pittsburgh Steeler due to questions surrounding his character and brushes with the law.

On the other hand, if Pouncey is of the opinion that his friend Hernandez is deserving of public support, he chose an extremely poor way of showing it. The "Free xxx" phrase is most commonly associated with the Special A.K.A. song "Nelson Mandela/ Break Down the Door" released in 1984 as part of a growing worldwide anti-apartheid movement. The phrase "Free Mandela" was part of the lyrics of the song and became the slogan of the movement and was printed on clothing worn by protestors around the world, painted on the sides of buildings and on posters wherever the protests took place.

Hernandez was not protesting the disenfranchisement of an entire society by allegedly committing the crime he is charged with, nor was he attempting to overthrow generations of racial oppression on the part of a ruling party. No, Pouncey's friend and former teammate is charged with allegedly murdering a man because Hernandez objected to whom the man was talking to.

To equate what Hernandez is undergoing, being refused bail and held in solitary confinement regardless of whether he is ultimately found innocent or guilty, with the decades of torture and imprisonment Nelson Mandela endured is such a profoundly ignorant comparison that it boggles the mind and is just as ignorant and demonstrative of a total lack of awareness as Mendenhall's disbelief that the collapse of the WTC buildings was "simply" the result of two fuel-ladened commercial aircraft crashing into them which implies that he gave at least passing credence to some of the half-baked rumors that the tragedy was somehow staged for ulterior motives by factions within the U.S. government. Such statements raised questions of Mendenhall's ignorance and/or gullibility, just as Pouncey's wearing of the hat was socially ignorant and raises questions of his judgment, lack of sensitivity towards the murdered man's family and disregard for the impact his statements have on others; in other words, character issues.

Of course there is a third possibility; he simply was given the hat to wear by someone in the crowd during his birthday celebration and Pouncey may simply have put the hat on his head without even reading what it said.

As the pictures go viral in the social media, it will be interesting to see what statements or reactions, if any, Pouncey makes. Pouncey has had social tiffs with fans before, as he showed in his reactionary tweets to fans who criticized him for promoting his rap song minutes after the Steelers lost a playoff game to Denver in 2012. Silence might be his best option here, but that will only fuel further speculation. If it was simply a hat someone gave him to wear, then the young (24 years old) professional will have learned a harsh lesson in the reality of being a public figure.

On the other hand, any statement Pouncey might make trying to justify the message his intentionally worn hat was intended to send may either call into question his education and common sense, or even further embroil the three time Pro Bowler in controversy at a time when the Steelers are making an apparent effort at raising the level of character on the team.

The reason this whole issue is a tinderbox waiting to explode is the one that rose after the Patriots elected to cut Hernandez shortly after he became a "person of interest" in the Lloyd murder; the balance of physical ability against moral culpability. Many opposing fans and members of the media castigated the Patriots in retrospect for their decision in 2012 to re-sign Hernandez to a mult-million dollar, multi-year contract, deciding that there should have been warning signs back then that the player had serious character issues and should not have been made part of the Patriots' long term plans.

The Steelers, like all professional sports teams, must balance the worth of a player against public opinion; they've taken heat in the media and from fans for the actions of their franchise quarterback Ben Roethlisberger, former Steeler James Harrison's brushes with the law, and most recently, the drunken demolition derby perpetrated by nose-tackle Alameda Ta'amu but retained all three players on the basis of what they can contribute to the team on the field.

Yet such cost/benefit decisions come at a price. The solid civic foundation the Steelers (or the Patriots or any other team) want us to believe they are built upon develops cracks whenever the "boys will be boys" excuse is played, or the sanctions the teams impose on the offending players are seen as being measured against the team's desire to retain the players services on the field.

It may be unfair and unrealistic to expect rich young men like Maurkice Pouncey to be cognizant of every situation they find themselves in and the import of each message on every article of clothing they wear in public, but it is part of the profession they chose to pursue. As a result, the "statements" their actions or their clothing make become known to the world "at the drop of the hat" and will be dissected to the nth degree. Right now, Pouncey finds himself standing on the edge of the public perception cliff from which Mendenhall threw himself. How Pouncey and the Steelers handle this will have repercussions leading into training camp and beyond, especially given the fact that Pouncey is eligible to become a free agent in 2015.