While Steelers fans remain divided over whether Maurkice Pouncey's hat was an intentional statement, or is an actual problem at all because of a young man's age or cultural influences; another young athlete's story makes a statement of its own.

Charles Barkley didn't see himself as a role model. He was just a basketball player trying to win championships and get paid. He felt there were more important things in his life than worrying about sending the right message. He isn't the only athlete to think that way.

When Maurkice Pouncey of the Pittsburgh Steelers and his twin brother Mike Pouncey of the Miami Dolphins sent the message 'Free Hernandez' from their headwear at their recent birthday celebration, they didn't realize the firestorm they would ignite. They, and many who follow them as athletes, thought it was just an innocent showing of support for their former collegiate teammate Aaron Hernandez who currently sits in jail awaiting trial for his alleged role in the brutal execution of Odin Lloyd. Unfortunately, not everyone read their message the same way.

Quickly, many came to their defense claiming immaturity or lack of wisdom due to their age. Both men are now 24 years old. Others, like Trib Total Media's Mark Kaboly, blame their poor decision on outside influences like alcohol or peer pressure. Some simply felt it was just a product of the times we live in today, the music they may or may not listen to, and/or the culture they grew up in. Those who have come to their defense usually also include some mention of slow-news cycles victimizing the Pounceys for publicity's sake, and that good performances on the field will make it all go away.

No matter how the story is spun, one fact remains true above all others. The first people to use their hats for publicity's sake were the Pounceys themselves. We still don't know if they had the hats made, or if someone else supplied the headgear. Regardless of where they came from, the hats were worn for one reason only -- to get noticed. Whether they wore them to be seen by the eyes of party goers at their highly publicized birthday celebration at a public nightclub, to draw national attention to themselves or simply just to be seen by Hernandez; they wanted to be seen in them.

Interestingly enough, most fans who follow the Steelers or the Dolphins decide it isn't worth worrying about because they're just athletes for their favorite teams, and as long as they continue to do that job, all is forgiven; but should it?

Victor Cruz of the New York Giants and Roddy White of the Atlanta Falcons recently had to put out wildfires of their own, after inflammatory Tweets following the announcement of the George Zimmerman verdict was announced. While each player has the right to disagree with the outcome of the case. People were offended by their statements.

Should they have been?

Neither player announced their feelings on the situation via their team's official websites or social media accounts, the messages were sent from the players' personal accounts. The Pounceys were wearing their hats at their own birthday party, which may have been held in a public setting but was still a private affair. Athletes are still human beings, and human beings have thoughts, emotions and opinions. Do they not deserve the same rights and freedoms any other citizen enjoys?

Charles 'I'm not a role model' Barkley would have probably said, 'Yes, they do.'

Whether they like it or not, they don't. Why? For the very same reason they have opinions to express in the first place; because they are human beings. Morals and ethics used to comprise a standard by which people strove to live by. One does not have to exist within the confines of religion or philosophy to have heard the Golden Rule which states 'Do unto others as you would have done unto you'. For every action there is an equal and opposite reaction. There are always consequences - good or bad - to everything we do, whether criminal or technically lawful.

As human beings and like any 'rule', we have the right to choose whether or not to follow it.

Aaron Hernandez had the right to choose to ignore the rule if he actually did play a part in Odin Lloyd's death as he has been accused and held without bail. If found guilty in a court of law, he will have to pay the consequences for exercising his right of free will.

The Pounceys exercised their right of free will by wearing the hats to show support of Hernandez. While they didn't cause physical harm or break any law by saying 'Free Hernandez' through a hat; their choice of such a vague statement omitted too many other details about Hernandez's ordeal, which allowed room for possible misinterpretation no matter how their message was intended.

Didn't Odin Lloyd have the same rights to things like Life, Liberty and the pursuit of happiness; especially without fear of execution.

The message on the hats only expressed support for the rights of the man who allegedly executed him. No remorse is shown to the victim or his family. No support is shown to Hernandez's fiance and now-fatherless child. No explanation at all was given to the actual meaning of the message. All the hat said was 'Free Hernandez'.

When the questions, 'Why didn't they know any better?' and 'Why didn't they give it some extra thought?' are presented, the immaturity defense among other excuses cycle the conversation back to Barkley's original mindset of 'athletes are supposed to be athletes, not role models' and they don't deserve to be questioned or doubted.

Blowing up all validity of those defenses is one Cameron Lyle.

Lyle, 21 years old, was a collegiate track athlete and a senior at the University of New Hampshire. He was a discus, shot put and hammer specialist, who was forced to surrender his athletic career because he made statement of his own through his actions.

His statement? Human life is more important than sports, popularity, endorsements -- pretty much anything.

To whom did he make that statement? Someone he had never met. He didn't even know his target's name.

So why did he lose his athletic career? Lyle, during his sophomore year at UNH, registered as a bone marrow donor. Bone marrow requires much more specific similarity than blood when evaluating donor and recipient for the purposes of transplant. Even though he registered, there was a good chance he would never be called upon to donate.

As a senior, the phone call actually came. The voice on the other line described to Lyle the story of a 28-year-old man suffering from Leukemia, which in the opinion of his doctors left him less than six months to live. The voice went on to inform Lyle of the sufferers extremely rare marrow type, and how Lyle was a perfect match.

Lyle, without hesitation or selfish thought, immediately said 'Yes'. He admitted the thought of it affecting his athletic career didn't even cross his mind until after he ended the call; however, never did he second guess his decision about donating his bone marrow.

Once the doctors removed two liters of marrow from Lyle's pelvis, training and practicing were no longer possible. Restrictions kept him from lifting any weight over his head for at least a month in fear of injuring the weakened part of his skeletal frame. Inability to train meant he would not get his final shot as a senior to compete at national championships.

Track athletes don't have the same opportunities awaiting them after college. So why would someone, with nothing to gain and everything in his world to lose, toss it all away for someone he didn't even know?

His coach summed it up best to Lyle, when the young man approached the coach to inform him why he would no longer be participating:

"You go to the conference and take 12 throws or you could give a man three or four more years of life. I don't think there's a big question here. This is not a moral dilemma. There's only one answer."

In this modern age, when professional athletes (i.e. NFL football players) decide the best use of their affluence and notoriety is to sling their personal wants, feelings and opinions around with zero regard for anyone beyond themselves, feeling better about themselves or how they appear to friends or fans, it is refreshing to know there are people don't need money, fame or public relations specialists to help them keep the real world in perspective.

While people like a Pouncey are excused for blowing up at fans hours after a difficult loss or lighting fuses by wearing a hat requesting asylum for a man charged with murder even though he should have had plenty of time to think about his relationship with Hernandez considering the time gap between Hernandez's arrest and the birthday party; Lyle, who is three years Pouncey's junior, sacrificed his last chance at athletic glory to make a positive impact on his world where someone was about to lose their life for reasons beyond their control.

Lyle didn't go out of his way to tell the world about it. Every news outlet pursued him once word of his gesture reached them, but he didn't care about the publicity. He just did it because he knew it was the right thing to do without having any personal attachment to the recipient.

Why does one athlete without wealth or celebrity filled parties in his honor do the right thing for a stranger without a second thought or taking a second to think, while others who live in the public eye can't see anything beyond what they want no matter how much time they have to discern?

As evidenced by this final photo, even Lyle understood that even the slightest gesture can set the world on fire. So why is it so outrageous to expect older men to know the same? Aren't some things in this world more important than sports, money or popularity? 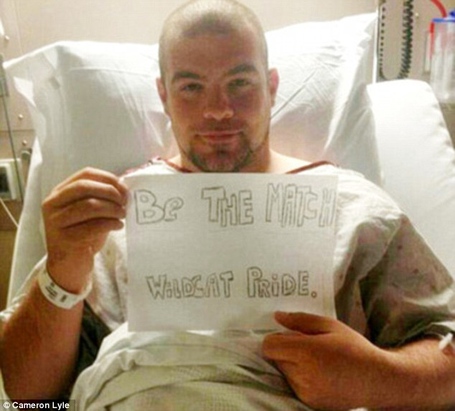