Steelers offensive line depth chart: Gilbert or Adams, either will be a better left tackle than Starks

As Pittsburgh approaches training camp, it seems that Marcus Gilbert will be the starting left tackle. This is much to the chagrin of Steelers fans everywhere, as visions of him falling on David DeCastro's leg unconsciously come to mind. Is this fear valid though? Will Marcus Gilbert be better than the Steelers starting 2012 left tackle Max Starks?

Share All sharing options for: Steelers offensive line depth chart: Gilbert or Adams, either will be a better left tackle than Starks

The average Steelers fan has more than likely praised Max Starks for his work over the last two years. Why?

Prior to him coming off the couch, the Steelers started the horrendous Jonathan Scott at left tackle in 2011. Starks was signed and played to what amounted to a pretty decent season. He was then resigned in 2012 after Pittsburgh's second round pick, offensive tackle Mike Adams, tweaked his knee.

The praise for Starks' 2012 season this time however was misplaced as it wasn't anywhere near as good. Pittsburgh moves into the 2013 season with Starks no longer on the roster and some fans are concerned with the protection of their franchise QB's blind side. Should the Steelers be worried with Gilbert starting left tackle now that Starks is gone?

Hartings says concussion tests were a joke in 2005 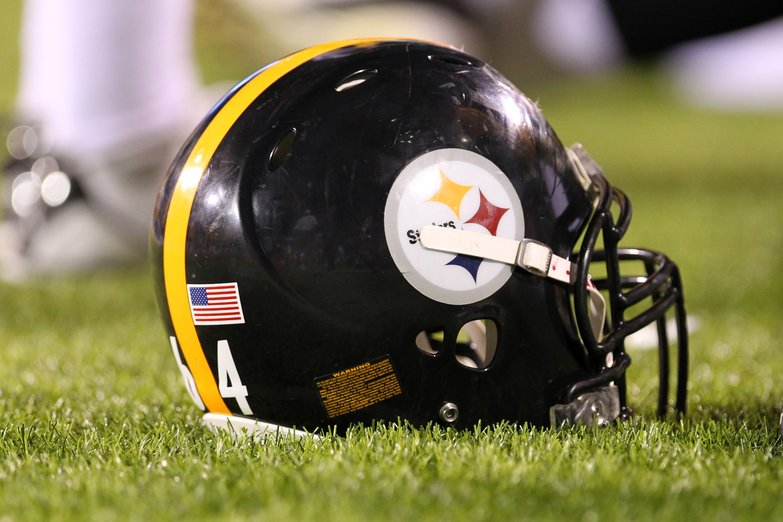 Former Steelers C Jeff Hartings says he and other players faked their way through concussion tests in 2005.

It is safe to say that the Steelers want to improve on their running game in 2013. Last year they managed an abysmal 98.6 yards per game on the ground (25th in the league) and only 3.7 yards per carry. Part of the reason for this lack of performance is on the offensive line. Pro Football Focus graded the Steelers run blocking as a team and gave it the second worse grade in the league at a -34.9 behind only the Arizona Cardinals.

Starks was the worse run blocker of the group. His 6-foot-8 frame made it difficult to maintain leverage at the point of attack and his 340 pound body wasn't quick enough to get to the second level. As a result this led to ineffective or missed blocks and usually a defender clogging a hole. PFF graded his total run blocking ability at -11.5 while finishing only four games just barely over a score of zero in the category. In fact there are only three tackles who played at least 25 percent of their teams snaps that graded lower than Starks at run blocking.

So how did the other tackles on the roster do?

Mike Adams was the only one of the four tackles that finished with a positive grade. (0.3). While he is better at the line than Starks he too struggles to get underneath his opponent. His best trait though is what he does at the second level. He can get to the linebackers with ease and gives the effort to drive them off the ball. This skill was highlighted best on Chris Rainey's TD run against the New York Giants. Adams on the play didn't just block one defender he had to crucial blocks to give Rainey the lane.

Beachum graded surprisingly in second among the tackles (-1.2). Aside from one bad game against the Cincinnati Bengals in Week 16 he was remarkably average. He too struggles to move people off of the line of scrimmage but he has the athleticism and the intelligence to get his body in position between the defender and the hole to make an effective block. Clearly though strength was an issue for Beachum because even though he was still on his man he would be pushed back into to the hole on quite a few occasions.

Gilbert finished third among the tackles (-2.2) for 2012 but far higher than Starks. Even looking at his 2011 run blocking grade (-5.2) he finished well above Starks'. Gilbert like Adams and Starks has trouble getting underneath his opponent. To make matters worse he loses his balance when engaged more than one would like and he is lazy on his chop blocking. However despite these issues he is stronger than Starks and better able to use that to his advantage at the point of attack. He is also far more consistent than Starks in the run game as well never grading lower than a -1.0 in any game and in his rookie year he had three games where he graded higher than +1.6.

It is clear to see that whoever the Steelers use at left tackle will likely be a better run blocker than Max Starks was. This will only help the Steelers goal of an improved run game in 2013.

Emmanuel Sanders will 'Make the Leap' 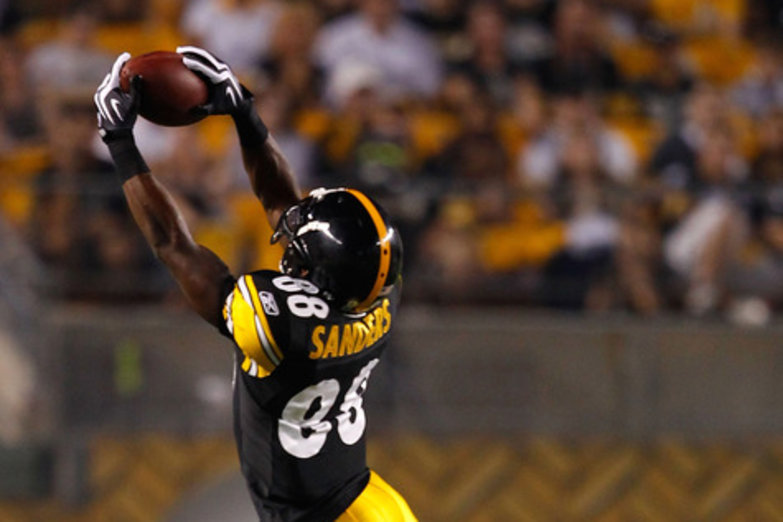 Steelers fans are the only ones thinking Steelers WR Emmanuel Sanders will have a big year, writes BTSC's SteelCityRoller

It is when looking at pass blocking that the difference between Gilbert and Starks widens. Max Starks in 2012 had 624 snaps pass blocking and allowed 5 sacks, 8 hits, and 40 hurries or a total of 53 total pressures. This resulted in a pass blocking efficiency grade of 93.4 (45th of OT that played at least 50 percent of their teams snaps). He didn't have the quickness to keep up against speed rushers and allows pass rushers to get underneath him in the bull rush. Why does Steeler Nation have this inflated sense of Starks' pass blocking ability?

There are two reasons. You will notice that despite the number of pressures, the number of times Ben get hit from them are low. This could be due to Roethlisberger's familiarity with Starks. When pressured Ben trusts Starks will be able to push them down field just enough so he can step up and get out of the pressure.

Where does Gilbert stack up as a pass blocker then?

He showed he had the foot speed to keep up with most pass rushers but often times a miss step had him lunging to just push the defender down field. He finished the 2012 season with a PFF pass blocking grade of +3.9 on the year a lower number than his rookie year of +10.6. The major difference between Gilbert and Starks has to do with how often Ben gets hit by the pressures they allow. Over two years Gilbert has allowed Ben to get hit on 13 of his 28 (46.4 percent) pressures allowed, while Starks allowed Ben to get hit 13 of his 53 (24.5 percent) pressures he allowed in 2012.

This is a telling stat on how the two tackles got beat. It would seem though Starks was beaten more, but he was able to do just enough so Roethlisberger could avoid getting hit despite the pressure. Gilbert on the other had while not beat as often will get Ben hit more often than Starks when beat. Both the number of pressures and the types of pressures can have a dramatic impact on a QB play and while Gilbert was beat as often his were the ones to be most concerned with. 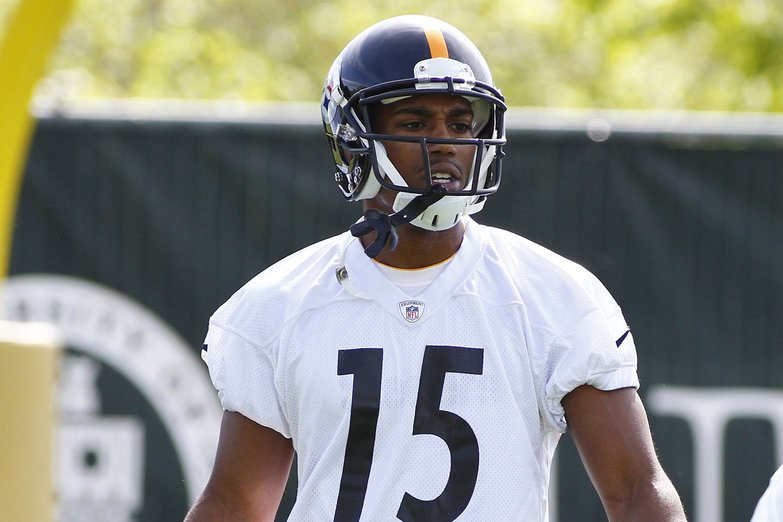 The Steelers don't mind playing the role of the underdog, writes BTSC's SteelCityRoller.

Beachum finished second among the tackles in pass blocking with a grade of -0.4. He had 195 pass blocking snaps and allowed two sacks, three hits and 13 hurries for a total of 18 pressures (pass blocking efficiency grade of 92.8). Beachum's biggest struggle is on speed rushers, he just doesn't have the length or the foot quickness to consistently shutdown the outside pass rush. He does however play with a nice center of gravity to handle some of the power rushers in the NFL.

Adams was having a pretty decent year as a pass blocker in his first six games (three sacks, one hit and five hurries). The next four are different stories. He allowed four sacks, two hits and 10 hurries over that time, with the pass rushes of the Giants and Ravens proving to be too much for the rookie to handle.

Adams biggest problem isn't the lack of athleticism or length it is all mental. He struggled understanding which defender he was responsible for often figuring it out too late (former Ravens OLB Paul Kruger signed for big bucks this offseason thanks in part to a monster day off Adams' mental mistakes). His footwork was atrocious; at times he would take a false step or wouldn't step at all. Finally he failed to use his length to his advantage with a majority of the time he waited until the defender contacted him before he engaged. Adams has the tools but he needs a lot of refining to be able to use them.

From the numbers it is clear to see that of the tackles on the roster Gilbert is the most suited be the Steelers left tackle. The bigger question is do you take Mike Adams' far better run blocking and potential to improve in pass blocking over Beachum's overall just slightly less than average play at right tackle?

My answer is yes.

Adams graded worse in pass blocking but only because of the sacks he allowed, on average he allowed a pressure slightly less than Beachum. This data would indicate that Pittsburgh has done the right thing by placing Gilbert on the left side and Adams on the right.