The Pittsburgh Steelers roster saw a lot of upheaval this off season. Did they say goodbye to the right people? Should the have let others go? Who should pay for the proposed expansion of Heinz Field. Answer these and other Burning Questions remaining in the wake of an eventful off season.

Share All sharing options for: 5 Burning Questions left by a busy offseason

Breath easy Steelers Nation, we are about to exit "The Void."

The Pittsburgh Steelers 2013 off season began with the release of Chris Rainey and ended with a "make news" story about a hat. In between we were treated to predictions of a free agent apocalypse but instead were perhaps treated to the salary cap equivalent of "The Loves and the Fishes." And of course there was the 2013 NFL Draft.

Training camp is a week away, but before turning attention to the future, Behind the Steel Curtain turns its attention to 5 Burning Questions left in the wake of the off season we just finished. 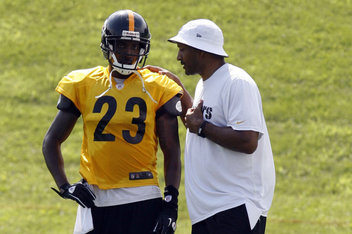 1. Steelers Nation said goodbye to decorated veterans such as Charlie Batch, Casey Hampton, Willie Colon, and Max Starks. However, are there any other tenured veterans who you think may have overstayed their welcome and either should have been cut and/or won't see opening day with the Steelers?

2. The Steelers also bid farewell to younger players like Mike Wallace, Keenan Lewis and legend in the making James Harrison. Should the Steelers have done "whatever it takes" to keep any of them? If so who? And, more importantly, at the expense of which other players?

Remember, Mike Wallace got $12 million per year, Keenan Lewis $4.51 million per year, and the Steelers last offer to James Harrison was reportedly between $4.6 and $3.7 million. Here's BTSC's latest salary cap ledger for reference. No need to be super precise with your math, but you gotta try.

4. During four years of injury-induced offensive line turmoil Doug Legursky played in 50 games and started 17 at either center or guard (and even saw spot duty as a fullback) Yet the Steelers couldn't find any love for Legursky, letting him walk to the what Neal Coolong has dubbed "Pittsburgh Northeast" aka the Buffalo Bills.
Do you agree with the move, or do you fear that losing Legursky could leave the Steelers in the lurch?

5. As everyone knows, the Steelers picked Jarvis Jones in the first round of the draft. In his first move as a Steeler, Jones requested number 95, the same jersey once worn by linebacker Greg Lloyd. How do you feel about untested rookies staking claims to numbers worn made famous by legends?

That's it folks have at it!