The upside of an off season with so much uncertainty is that training camp will be full of legitimate intrigue. Ten questions aren't nearly enough. Here are some more.

Share All sharing options for: More questions about the Steelers entering training camp

11. Will Jack Bicknell Jr. and his new schemes mark the point where the offensive line finally turns the corner and is no longer viewed as a liability?

Put another way can he do for the offensive line what Carnell Lake did for the defensive secondary when he took over that group in 2011? Fans have been disgruntled and upset with the offensive line since Alan Faneca left. Even with two Super Bowl appearances and one Lombardi the dissatisfaction has been consistent. As with the additions of Danny Smith and Richard Mann the most important factor in the possible improvement with this group is not just a change in personnel so much as an upgrade in staff and approach. The biggest problem with the starters will likely be experience not ability. Of course with the history of injuries depth is a huge concern. But the scheme itself and the different body types that are required to run it may serve to reduce the injury risk. 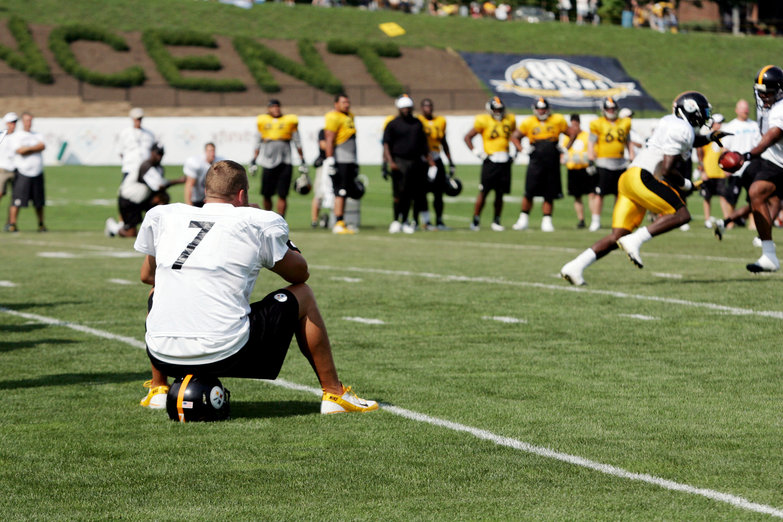 When the formalities begin this weekend what are the things that we should be looking for that may shape the season.

12. Will Marcus Gilbert and Mike Adams take the next step?

You almost have to believe that the team believes that or they wouldn't have let Max Starks leave, would they? But until they do it it isn't done. And there is an additional question.

13. Will the carjacking incident in May and the ongoing ramifications be an impediment to Adams' development?

This has had to have slowed him down a little. It is a physical hurdle and a psychological and emotional distraction, not to mention a drain on his time when he has to deal with attorneys and the like. It may very well have no effect whatsoever with his on field performance, but it strikes me as unrealistic to dismiss the possibility that it might. At the very least it has slowed his preparation.

14. Who steps up and into the gap in the backup roles?

The easy answer is Kelvin Beachum, but then who else? The popular dark horse is Mike Golic Jr. But somehow I doubt anyone really knows at this point. This may be one of those heart and character issues that will only begin to manifest once the players are actually under the gun.

15. How will things shake out with the running backs?

I think there may be more to how this question is resolved than is being discussed. Talent and work ethic will be important of course. In reference to Neal Coolong's recent piece comparing Dwyer and Redman, I give the nod on talent to Dwyer and work ethic to Redman. But will the new blocking scheme tip the scales and change our assumptions as to who can best adapt to its dynamics? Redman's weight loss may not just be a conditioning issue but also an acknowledgement that relative speed may be more of an asset moving forward than bulk. And then there is that special teams factor that I spoke of in my previous post. Would Chris Rainey have made the team last year without it? It provides Stephens-Howling with an advantage, and even keeps Baron Batch, who would seem to easily be the odd man out, still in the conversation for now. And then there is the unknown that is Le 'Veon Bell. If he doesn't step up as anticipated and become the feature back immediately or just one step removed then what? It would be so much easier if one player seized the feature back position by the throat. But why am I doubting that will happen?

16. What will become of the stepchildren?

This is an interesting phenomena that I've spoken of before and I'm not certain that it is at all peculiar to Steelers Nation. There are always a few players that a significant segment of the fan base sours upon, and they would prefer that those individuals would just go away. Sometimes you can point to specific characteristics or instances where the player annoyed them, but as often as not it would seem that impatience or even boredom were the cause. I suspect the concern in some cases is unconscious. For example, a lot of people considered Rashard Mendenhall to be a stepchild. If you quizzed them they might respond that he tiptoed into holes too much or fumbled too much. But I think some of it is that he followed Jerome Bettis, and he just wasn't or never would be Jerome. Other examples would include Deshea Townsend, Charlie Batch and Willie Colon.

For training camp 2013 the group includes William Gay (too easy), Ziggy Hood, David Johnson and Stephenson Sylvester. Others receiving votes would include Matt Spaeth, Alameda Ta'amu, Jonathan Dwyer, Plaxico Burress, Cam Heyward and Chris Carter. There is a first year category as well. Last year's winners were Kelvin Beachum and David Paulson. This year I'm guessing Landry Jones. Some of these players are, indeed, flawed and their days could be numbered. For others it is more a matter of wishful thinking and the low expectations will be confounded by what happens on the field. The classic example would be Willie Gay in 2011.

Rookie RBs typically do little for the Steelers 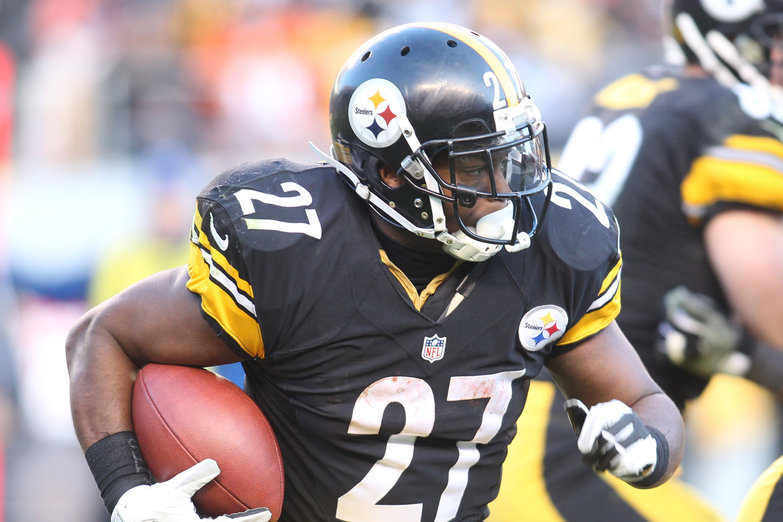 Jonathan Dwyer may not have to do much to hold off Le'Veon Bell, considering the lack of success Steelers rookie running backs have had over the last 40 years.

17. Who is going to emerge in the defensive secondary?

Like the offensive line the interesting thing here are the backups. Barring injury there are no issues concerning who the front line players are. But there are fascinating questions with just about everyone else.

18. Will reuniting with Lake allow Gay to regain the level he achieved in 2011?

19. Can Curtis Brown make the leap that Keenan Lewis and Cortez Allen made last season?

Their performances late in the 2012 season seem to come from left field. Is it possible that they are being underestimated again?

This could be good news (they earned it) or bad (thrown into the fire due to injury or poor performance by others). I would be shocked, barring injury if either of these players won starting jobs in camp. But the groundwork would be laid at this time for elevation later during the year.

22. How many of the question marks for the defensive line will be answered by Labor Day?

Other areas of the team have received a greater amount of attention but I think a case can be made that the D line has the greatest mystery quotient of any unit on the team. But I think its the most misunderstood as well, making it hard to get too worked up, or worked up for the wrong reasons with what is unfolding there.

It is a rare occurrence for someone to come in become a starter or star on the defensive line immediately, or even after a couple of years. Casey Hampton did it over a dozen years ago. Now name another. Brett Keisel is a twelve year veteran. Eight years ago during the team's fifth championship run he still wasn't a starter. Tell me that before last year you knew that Steve McLendon was going to be a starter in this defense. Now stop lying. So with Ziggy Hood entering his fifth season and Cam Heyward his third can anyone say for certain that either is a bust? Or not for that matter. If memory serves some raised those questions about Keisel as well. Right now Keisel is the only member of this group without a significant question mark attached to him, but given his age and recent injury history there is an at-risk quality at play that adds to the perception of instability.

As alluded to earlier, Hood labors under the stepchild aura in the minds of many, but even a more sympathetic perspective would have to acknowledge that time is getting short and as the second oldest player on the unit it is time to step up if he can. The prospects for Heyward appear to be less dire and more optimistic at this point. He's not at the top of the depth chart presently, but in the worst case scenario should get plenty of playing time and the opportunity for more if he can discipline his game.

24. Will anyone push Steve McLendon?

This is not the time to ask the more important question; can McLendon perform at a consistently high level over the course of an entire season? Chris Rainey looked great in August and Isaac Redman was able to impress to a greater degree in the regular season when it involved limited snaps. This is an unknown that will hang over the season until it nearly completely unfolds.

In the meantime there are two immediate concerns; how will the absence of Casey Hampton in terms of both leadership and competitive challenge effect McLendon and the other tackles, and can Ta'amu and/or others step into the gap to provide depth and the necessary competitive edge?

25. How competitive will Worilds vs Jones actually be?

There are all kinds of scenarios that can play out with this. Maybe it won't be competitive because Worild's maturity as a player and veteran savvy dominates, or on the other hand Jones proves to be a stellar talent. But for the sake of the drama (we're still a long way from the beginning of the season) wouldn't it be nice if they were more evenly matched and there was a long knock-down-drag-out between these two. Given the nature of challenges in both units backs on backers should be particularly intriguing this year.

26. Is there a Chris Hoke or Charlie Batch among the tight ends?

Chris and Charlie stood in the gap for Hampton in '04 and Ben in '10 respectively. Can Matt Spaeth or David Paulson step it up for Heath Miller? David Johnson, who is still recovering from a similar injury as Miller is in a sort of twilight zone here, but who knows.

If not what veteran player, if any, will be taking that big step out of the crowd?

28. Is Alan Baxter or Isaiah Green this year's Adrian Robinson?

Who, if any, among the rookie free agents and other low profile newcomers will make a splash and the team?

Who, if any, among the high profile newcomers can make the leap to stardom?

Is there anyone to follow in the tradition of Isaac Redman, Antonio Brown, Chris Rainey and Baron Batch?