In which we get in touch with Steelers Defensive End Brett Keisel's inner Mountain Man.

Is there anyone in Steeler Nation who doesn't know the story of Brett Keisel? He is the classic case of a seventh round pick who, through determination, exceedingly hard work, and a bit of luck became a long-term starter for a contending team. If you look into Keisel's background it becomes easier to understand his work ethic and unassuming demeanor.

Back in 2010 I went to my first ever Steelers event, "Ladies Night Out." One of the speakers was Brett Keisel, and I was quickly impressed with his sense of humor. The event happened a couple of weeks after the only interception of Keisel's NFL career thus far, a recovery of a tipped pass which he took to the house. As Keisel entered the hall they played the video footage from the game, and he was pretty pumped. (If you want to get pumped as well, you can watch a video of it here.)

Rather than re-write everything from the old article, I'll quote the relevant bits. (You're of course welcome to view the whole article, found here.)

Brett grew up in Wyoming, on a cattle ranch near Greybull. This presumably sounds pretty romantic to those who have never lived in Wyoming (where summer comes on July 13th or so, if you're lucky, and is gone by August) or been part of the backbreaking work of ranching...

He got an enthusiastic response when he told us that he's known his wife since fourth grade. They have a 2 1/2 year old, and are expecting their second child in November. He indicates that his wife is very supportive of him and is always the first to tell him when he missed a play or otherwise screwed up.

He loves basketball, and played both football and basketball in high school. He even considered a couple of schools that would let him play both, but obviously eventually opted to concentrate on football at BYU. He began his college career as a tight end, but was quickly moved to defense. He seems to feel that the coaches are missing a good bet by not giving him the ball more often...

Brett went on to describe life with the Steelers and his feelings about the club... I loved hearing him talk about Dick LeBeau. Brett says that every morning LeBeau bounds into the room and says "Good morning, men - it's a great day to be alive." He says that Coach LeBeau never yells or puts you down. But if he thinks you aren't giving your best effort, he has a look that makes you wish you hadn't disappointed him. He feels that Coach LeBeau has been one of the biggest influences in his life.

It's obvious that sooner or later I'm going to have to do an article about the influence of the ownership and the coaches. But for the moment let's continue to look at the man of the hour.

For me, Brett Keisel embodies "character" in both senses of the word. He clearly has a rather puckish sense of humor. During another ladies' event a year later in which I was able to view the players' lockers at the Southside practice facility, I noted Keisel's locker was decorated with pictures of his wife and kids, which you would expect.

What I didn't expect to see was an autographed Brett Keisel football card displayed prominently in Ben Roethlisberger's locker. One can imagine the solemn ceremony with which this was presented. (You can read more about the players' lockers here.) One of the highlights of the 2012 training camp was Keisel's arrival at it—in a tractor. Be sure to check out the video here. This year he topped himself, arriving in a full-blown dump truck and a hard hat: 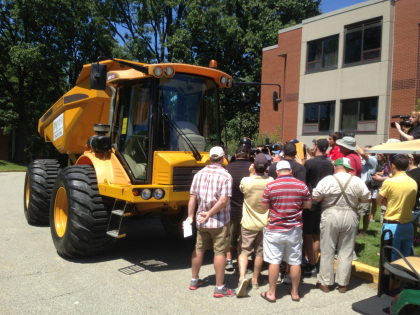 But before we talk more about #99, we need to pause to reflect upon his beard. After all, Da Beard has taken on a persona of its own, and even has its own Facebook page. (Actually, it has at least two: Brett Keisel’s Beard, which appears to be unofficial, and Da Beard. "Da Beard Gear" is sold at the latter, with the proceeds going to breast cancer research.) It even received an obituary.

Keisel has been forced to defend its honor, stating emphatically that he was not using any beard-enhancing drugs. Unbelievable as it seems, Da Beard is all natural.

After the Steelers-Packers Super Bowl, Keisel decided to shave Da Beard. Since the beard was so well known by then, he decided to make the folliculer readjustment into an event, not for his personal glory but to raise money for cancer program at Children’s Hospital, a cause dear to his heart.

After the modest beginnings it has become a bigger event each year. Those participating in the hair removal range from the Rooneys to Mike Tomlin, teammates and surprise "celebrity barbers." To date the event has raised over $100,000 for Children’s Hospital.

Head and Shoulders know good hair when they see it, so Keisel was asked to join his good friend and fellow iconic hair wearer Troy Polamalu to form the Troy Polamalu School of Deeper Learning. Keisel is Dean of Students, and his Practicum on Non-Verbal Beard Stroking is, alas, only too short.

Polamalu and Keisel were asked some questions after the unveiling of the website by The Shutdown Corner, including about their alleged air guitar excellence. Troy Polamalu responded:

We actually placed first and second in the Air Guitar Championships in Germany last year. We were on YouTube, but they took the videos down because we were too awesome.

Keisel’s talents don’t end at DE and air guitar. He recently conducted the Pittsburgh Symphony. As a professional conductor, I can tell you he is a great defensive end. However, he did manage to wave his arms in time with the music, which is not necessarily as simple as it sounds.

Keisel has a serious side, too, even off the field. Keisel’s response to the question "Have you thought about what you might like to do when football is over?" is indicative:

Yeah, I’ve thought about it. I think I’d like to stay in football somehow, but I feel like when I’m done, I’ll need to get away from it for a little while. This is my 11th year, and I can start to see the light at the end of the tunnel. But I really and truly enjoy coming to work — we have a great group of guys and they make it fun. It’s been a blessing to be a part of it, and to win Super Bowls, but I try to keep the focus on playing while it’s here. Like Troy says, you never know when it’s going to be gone.*

You can take the boy out of Wyoming, but you can’t take Wyoming out of the boy, and Keisel loves to hunt and fish. He is even featured on the cover of the latest issue of The Backwoodsman: 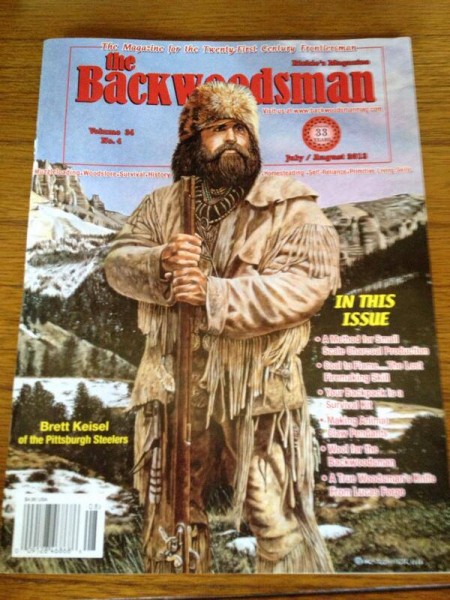 He decided to parley this love for the outdoors into an opportunity for some of the kids at Children’s Hospital, as detailed by this June 2013 article:

Ted Zablocki heard the horror stories about professional athletes and, frankly, was quite turned off by them.

"How some of them are, you don't want them to be a role model to your kids," Zablocki said.

The Steelers Pro Bowl defensive end hosted four boys ages 9­-14 from Children's Hospital of Pittsburgh of UPMC at the Alpine Hunting and Fishing Club of Bridgeville for a VIP fishing outing unlike anything they'd done before.

One of those boys was Ted Zablocki's 9 ­year-­old son Wesley.

If you click the article link, there’s a great picture of The Bearded One helping one of the boys with a fish he just caught. No amount of money contributed to a program, however needed the funds, can touch the life of a child in comparison to the giving of your time.

Keisel is not only a role model for the youth of the community. His unrelenting hard work and determination are models for his young teammates, as detailed in this June 7th Post Gazette article. After naming the '08ers' (the 12 remaining players with a ring from the 08 Super Bowl, Ed Bouchette notes the following:

Keisel hasn't missed a spring practice, even though several of the other '08ers on defense have gone missing, including Polamalu since his appearance the first week.

"This is my home, I live just up the street," Keisel said. "This is my team, I feel like. I think it's important for me to be here. We have a lot of young defensive linemen; I want to show them that even an old guy can come out here and work, even an old guy can go into the weight room and practice. If I can do it, they can do it."

I only hope the rookies are noticing. They couldn't find a better teammate to emulate than Brett Keisel.

*I know this isn’t Troy’s article, but I couldn’t resist sharing his response to the same question about life after football. It definitely explains why Keisel named Troy as the funniest athlete he knows when asked for the SI.com feature "The Hot Clicks":

TP: For myself, the first thing I would do is go back to Eastern Europe and defend my Air Guitar Championship.

You could do that in the offseason. You wouldn’t have to retire to maintain and enhance your air guitar dominance.

TP: But it does take a lot of time. People think that it’s just an off-season thing, but I spend a lot of nights practicing.

Well, I certainly don’t want to discount the work that goes into it. It’s like football – you have to respect the work.