It's not Johnny Football's Tebow jersey that matters, it's the Steelers jersey in the foreground. 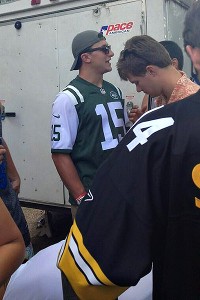 Others can't help but notice what's obviously a Steelers jersey in the foreground. The only question is, who's jersey is it?

Clearly, the second of two numbers on the shoulder is a 4. That means Ike Taylor (24) LaRod Stephens-Howling (34), Vince Williams (44), Chris Carter (54), Christopher Hubbard (74) Alameda Ta'amu (74), Antonio Brown (84) or Lawrence Timmons would be candidates.

For the sake of being thorough, let's add Doug Legursky (64) and Rashard Mendenhall (34) from the previous season.

While only roughly 1/3 of the first letter of the last name on the back is exposed, but it appears to be an "S," so rule out Taylor, Williams, Carter, Hubbard, Ta'amu, Brown and Timmons.

One would think Stephens-Howling would be the winner, but that would be failing to take into account what appears to be a Reebok logo on the sleeve.

The Steelers switched their jersey provider from Reebok to Nike in 2012, so it would have to be a second digit four on a jersey from no later than 2011.

Immediately, one name comes to mind. Weslye Saunders. He was No. 44 in training camp, and is definitely the kind of jersey a guy who would wear a football jersey to a frat party would wear.

But, again, deductive reasoning suggests we don't yet have a connection.

We remember the frat party is being held at the University of Texas...the alma mater of one former second round pick of the Pittsburgh Steelers in 2008 who wore No. 14.

Sorry...Training Camp Open Thread. Disagree or call me a loser in the comments, I'm fine with either.