From Bell Curves to Le’Veon Bell: A reason to have faith in the Steelers’ Draft

When the Steelers drafted a running back in the second round of the 2013 draft, it caught many in Steeler Nation by surprise that they selected Le’Veon Bell. Given how anxious Steeler Nation was for the Steelers to have a successful and productive draft, many questioned the level of competition he faced while at Michigan State; others how much he had left given his NCAA leading number of rushes he achieved his senior year.

Share All sharing options for: From Bell Curves to Le’Veon Bell: A reason to have faith in the Steelers’ Draft

And yet after the draft, Steelers GM Kevin Colbert was quoted as describing Bell as an "NFL back", and offensive coordinator Todd Haley called Bell a "three down back".

More: Colbert calls Le'Veon Bell a "NFL Back" Haley says Le’Veon Bell a ‘three down back’

While the more cynical might attribute Colbert's and Haley's comments as at best post-draft hyperbole, and at worst self-serving rationalization for their choice, we'll only really know after Bell has played a few years.

In recent years Steeler Nation has had reason to have doubts about the drafting efficiency of Colbert and Tomlin, and 2008 certainly validates those doubts (as I demonstrated in this article). It was the research for that linked article that got me wondering whether the commonly lathered praise for the Steelers drafting abilities held up to closer scrutiny. It's one thing while pointing out a Troy Polamalu or Ben Roethlisberger to cavalierly brush off a Limas Sweed or Ricardo Colclough as being aberrations; it's quite another if those players who make up the middle ground between the stars and the busts are in fact mundane and well, average. So I set out to see just where the Steelers' drafting history puts them in relation to the other 31 teams in the NFL.

The metrics used herein are (as in the previous articles) the CarAV and DrAV stats as compiled by Prof-Football-Reference (hereinafter referred to as "PFR"). I'll leave it to you to follow the link and refresh your memory on CarAV and DrAV.

I've added the Yrs (average career length) metric, which is simply the average career length of each draft choice as assigned to the team who initially drafted him, regardless of how long he actually played for that team. This metric is important because there is an obvious correlation between the "quality" of a player as measured by the CarAV and the length of said player's career; a high quality player is far more likely to have a long career (barring injury or other non-football related matter) than a player of poor quality. Conversely, a poor quality player rarely if ever has a long career; it is in defining the difference between "poor" and higher levels of quality (that is beyond the scope of this article) that blurs the line of causation between the quality of player and length of career

The first step is to determine whether averaging the scores for each team's draft choices in terms of CarAV, DrAV and Yrs for each year from 1990 through 2008 would result in a normal distribution curve (see link for basic explanation of Normal Distribution).

For the sake of brevity (hah!) of this article, I will only detail my analysis of the CarAV metric, although the process I've undertaken is identical for DrAV and Yrs.

As you can see from the graph below, yes it does. 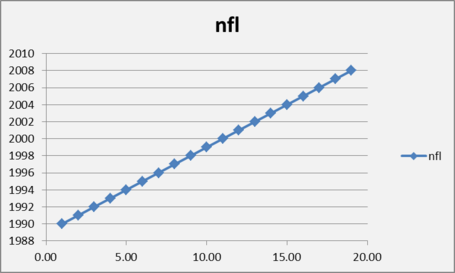 What this graph shows is that taken collectively, each teams draft class CarAV over 19 years falls within a range of points within which a linear trend line can be derived. Each of the points on this line contain the CarAV scores of each of the 32 teams, so in reality the numbers would be scattered above, below and along the trend line shown.

From here, if you calculate the average of all 608 scores (32 teams' annual draft classes x 19 years of data), you find the "Mean" or single average CarAV score for that period for the entire NFL. Then, you apply the calculations associated with Normal Distribution to create the bell curve shown below. Finally you then derive the standard deviations of all the scores from the Mean; that is the shaded portion below the curve:

What this curve illustrates is the fact that collectively, the average CarAV score of each of the 32 teams' draft classes for each of the 19 years analyzed (1990 through 2008) all fall within a determinable range of numbers, and within this range there is a consistent separation of the scores into three distinct segments called Deviations.

In the table below, I've averaged all 32 teams' individual CarAV Mean for the years being studied to derive an overall collective average NFL CarAV score, or Mean, which is 19.4339, with the three standard deviation scores color coded accordingly.

This analysis has been performed for all three metrics: CarAV, DrAV and Yrs, with the following results: 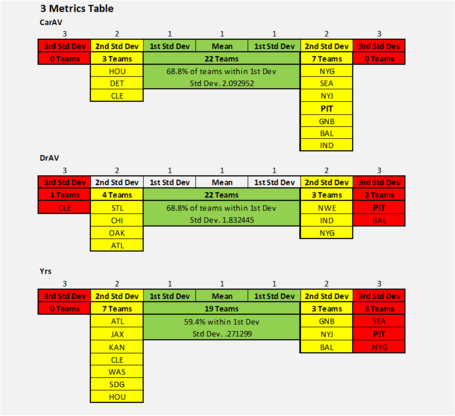 In the GIF below, the collective NFL is represented by the solid blue bell curve with its Standard Deviation range represented in the green yellow red band used in the charts and graphs above. The first CarAV bell curves for the bottom three rated teams appear, then the top seven scoring teams; all are overlaid on top of the NFL curve in dashed lines, with the Steelers black vertical dash lines representing its standard deviation shown last.

So, what do these bell curves tell us? First, let's look at the NFL, PIT and IND overlaid. If you recall, the Colts had the best CarAV of all the teams for the period in question, but both the Colts and the Steelers fell within the NFL's second standard deviation (the yellow column in the CarAV measurement in the 3 Metrics Table). 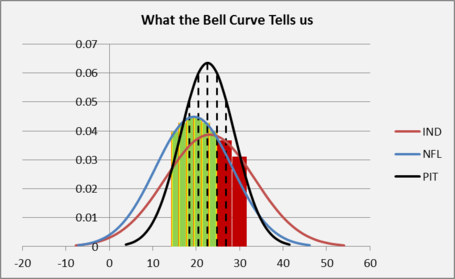 There is a substantial amount of solid red peeking out to the right of the NFL's green, and a sizable piece extending beyond the Steeler's black. This illustrates the difference between the NFL's Mean of 19.43391, the Steelers' 22.61239 and the Colts' 23.12726; these differences signify that the apex of the Colts' bell curve is more to the right (higher on the X axis) than either of the other two. You will note however that the Colts' curve is "squatter" than the Steelers' or the NFL's; it is lower but broader. The difference in the three curves is a result of the differences in the three standard deviation scores from the Means for each.

The Colt's bell curve looks as it does because of where each of its draft classes falls along the standard deviation line:

Now, compare the above to the Steelers:

In 2002, the Steelers drafted Brett Keisel (CarAV 53), Larry Foote (CarAV 56) , Chris Hope (CarAV 44), Antwaan Randle El, and Kendall Simmons (CarAVs 42 and 31 respectively); only three of the eight players drafted failed to produce a double-digit CarAV score. In 2003, only two of the five players drafted produced a double-digit CarAV score, but those two players are Troy Polamalu (CarAV 88) and Ike Taylor (CarAV 49), while the players the Colts drafted in the three years to the right of its Third deviation include such superstars as Reggie Wayne (CarAV 112), Edgerrin James (CarAV 114), and Peyton Manning (CarAV 165).

Consistency; a characteristic reflected not only in the quality of players the Steelers select, but is also reflected in the nature of the organization itself; it has had only three head coaches during the period of this analysis. The Colts have had eight; eight different coaches with eight individual drafting philosophies resulting in eight different drafting criteria, while the Steelers have maintained a consistent philosophy and thus tend to pick the same types of players every year. Look at the five draft class scores for the Colts that fall lower than, or within the lower Third deviation, and compare those scores to the four the Steelers had; there is only one Steelers draft class that scored lower than any of the Colts lowest scores (the infamous 2008 Steelers draft class).

It is this consistency that lends validity to my inclusion of Yrs (length of career) as a metric; because the Steelers consistently draft a preponderance of players whose scores within the CarAV metric fall within a higher and narrower band than the rest of the NFL, the characteristics that attract the Steelers to those players also result in more of those players playing longer; the DrAV score for the Steelers, ranking in the Third deviation as compared to the rest of the league in the table above indicates the Steelers select players over all who not just play longer than average, but stay on the team that drafted them longer. There have been notable exceptions, such as Mike Vrabel who couldn't crack the Steelers starting lineup after being drafted in 1997 and was released in 2000, only to go onto a stellar career with the New England Patriots. But those exceptions are few and far between.

But we're not done yet.

Since we're dealing with three separate Means, but trying to ascertain from all this analysis what team has been the most successful in terms of draft quality over the past 19 years, we need to standardize the data across the three differing Means and deviations; to do that, we'll look at the Z scores all of this data has produced.

Z scores determine how far a particular number is from the group Mean in terms of the group's standard deviation. In layman's terms for this analysis, each team's Z score for a given metric indicates how superior or inferior its score is for that metric than the average of the group of 32 teams as a whole, based in units of the group's standard deviation. The team with the highest Z-score ranks as the best team in terms of performance of the metric. As a test on the Z-score calculation, if you add up all of the individual Z-scores of a sample set, it should total zero.

Below are the tables showing the Z-scores for individual teams ranked highest (best) to lowest for each of the three metrics, color coded to show where on the bell curve they would fall: 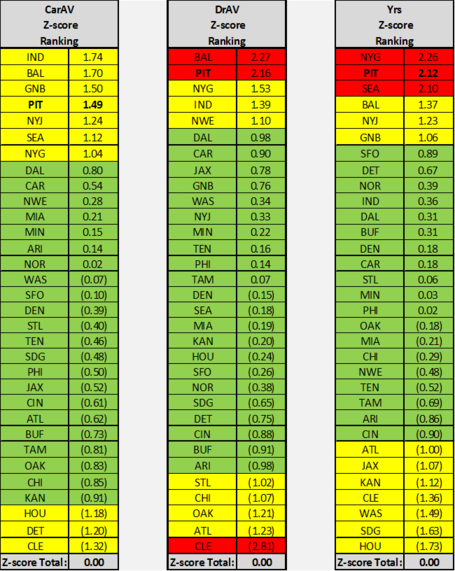 If you total up each team's Z-score for the three metrics, the overall standings look like this:

Thus, while Steeler Nation has long prided itself with having what it considers the best drafting team in the league (frankly, the best overall team period), hopefully this article helps provide empirical evidence to support that belief.

While not No. 1 in any of the three metrics used in this analysis (CarAV, DrAV and Yrs), the Steelers consistently ranked near the top in all three; it is this consistency in finding high achieving players year after year, getting the most out of them while they were members of the Pittsburgh Steelers, and selecting players that had durability and a propensity for long careers, that makes the Steelers the league's premier discoverer, nurturer and developer of talent in the NFL. Of course, given the rise of Baltimore Ravens, especially since John Harbaugh took over as HC under General Manager Ozzie Newsome, it is also understandable why the Ravens come in a close second to the Steelers.

Le'Veon Bell was not viewed by many in Steeler Nation as the "right" pick at No. 2 in this year's draft, and the rookie running back faces a steep learning curve to reach a level of performance expected from a second round pick, but the Steelers' bell curves should illustrate to you that with the Bell pick, in the Steelers' front office we should trust.