Will the Steelers running game improve this season under second year OC Todd Haley? Maybe. Maybe not. But recent history tells us that, even if the running attack struggles again in 2013, a healthy and effective Ben Roethlisberger may still be able to lead the team to playoff success.

Share All sharing options for: An effective running game and how it translates to recent Super Bowl success

With the additions of offensive coordinator Todd Haley, offensive line coach Jack Bicknell Jr., guard David DeCastro and running back Le'Veon Bell to the Steelers organization over the past two seasons, there has been growing excitement about the prospects of a new and improved running game.

And when you combine the organizational additions to the sentiment that team president Art Rooney II expressed in recent years about wanting to run the ball more effectively, there is no doubt that greater organizational importance is being placed on a ground attack. 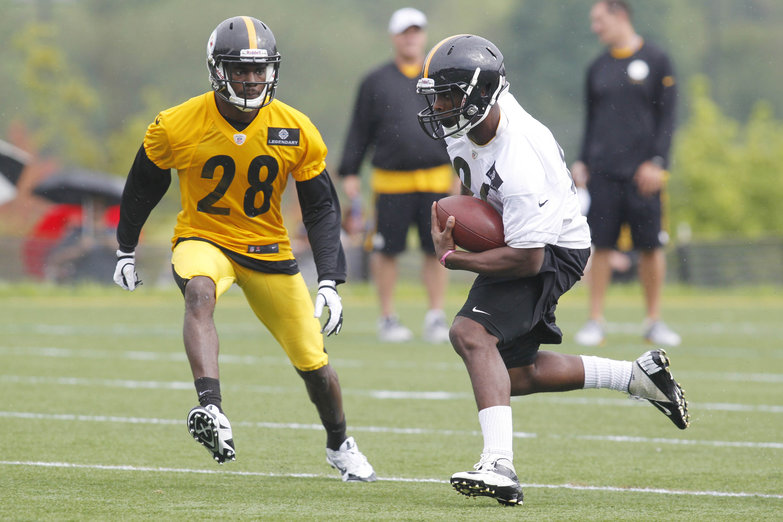 Steelers rookie running back Le'Veon Bell had an impressive performance in the team's full 11-on-11 scrimmage.

Whether this emphasis has to do with protecting franchise quarterback Ben Roethlisberger from injury or is simply a preferred philosophy from the boss, that's certainly open to discussion. But if it is a preferred philosophy by the ownership, it would certainly match the desires of most fans, because there is no question that Black and Gold faithful are intrigued by the prospects of a more effective rushing attack--a return to "Steeler football," if you will.

But while running the ball is certainly ingrained in the fabric of Steeler Nation, winning playoff games and championships is what we're known for more than anything. To steal and twist a line from coach Mike Tomlin: "Our t-shirts say "Sixburgh," not Six rushing titles."

Since we do have a "Super Bowl or bust" mentality in Steeler Nation, I decided to do some research with the help of ESPN.com and Pro Football Reference just to see how a dominant ground attack has translated to Super Bowl success over the past decade.

Behind the always exciting Michael Vick, the Falcons were one of those playoff teams, and they actually led the league in rushing three straight seasons from 2004-2006. But while Vick did lead the Falcons to the NFC Championship game in '04, Atlanta finished a combined 15-17 over the next two years and didn't make the playoffs. In fact, the team leader in rushing yards failed to qualify for the postseason for three straight seasons, starting in 2005.

One might say, "It's not important to lead the league in rushing. It's simply important to be very effective in order to have championship success."

With that in mind, I did some research on the past 10 Super Bowl Champions, and how well they performed in overall rushing yards, yards per carry and rushing touchdowns.

In terms of rushing yards, only two teams finished in the top five: The '05 Steelers, who ranked fifth with 2223 yards, and the '07 Giants, who finished fourth in the NFL with 2148 yards.

On average, the past 10 Super Bowl winners finished near the middle of the pack in terms of rushing yards and yards per attempt, while just barely cracking the top 10 in rushing touchdowns.

In 2008, the Giants finished first in the NFL in rushing yards but lost in the Divisional Playoffs. Three years later, New York finished dead-last in both yards and yards per attempt but won Super Bowl XLVI behind the arm of Eli Manning, who passed for over 4700 yards and 29 touchdowns during the regular season.

The Super Bowl is one thing, but what about simply making the playoffs? Of the past 120 teams that have qualified for the postseason, 66 (or barely over half) finished in the top 12 in overall rushing during their respective seasons.

The high point of the Steelers' otherwise disappointing 2012 campaign was their four game winning streak to improve from 2-3 to 6-3--including three wins in which the rushing attack averaged 155 yards a game; fans certainly were excited about that, and those three games are now often referenced as an example of just how great Haley's running game can be.

But what often gets forgotten in the 8-8 season of a year ago was the MVP-like campaign Roethlisberger was having during the first half of the year, when he passed for 16 touchdowns to only four interceptions, had a passer rating of 101.1 and was on pace for over 4300 yards through the air. After Roethlisberger suffered the SC joint sprain in the Week 10 victory over the Chiefs and had to miss three and a half games, the offense struggled to score points. After Roethlisberger's return in Week 14, he wasn't nearly as effective and matched his first half INT total by throwing four picks in a three-game skid that knocked Pittsburgh out of the playoffs.

Injuries certainly played a part in the grounded rushing attack. In addition to Rashard Mendenhall's struggles after returning from an ACL tear the season before, fellow running backs Isaac Redman and Jonathan Dwyer also suffered from ailments in 2012, as did offensive linemen Mike Adams and Willie Colon, who were both praised for their run blocking abilities before suffering serious injuries.

But regardless of how effective or ineffective the ground game was, the Steelers 2012 season went south after Roethlisberger's injury and never truly recovered.

So, will the Steelers running game be more effective this season with Bicknell Jr.'s zone blocking scheme, along with full seasons from Adams as well as DeCastro, the team's first round pick who missed the majority of his rookie season after suffering a serious knee injury in the preseason? Will Bell or Dwyer have a break-out year and re-introduce "Smash Mouth" football?

I don't know that, but I do know that Kyle Boller and Anthony Wright were the quarterbacks of the 2003 Ravens when their offense led the league in rushing. I also know that Tarvaris Jackson and Kelly Holcomb combined to start 15 games for the 2007 rushing champion Vikings, a team that missed the playoffs with an 8-8 record. Tim Tebow and Mark Sanchez were also signal-callers of some recent team rushing leaders.

As for the past 10 Super Bowl winning quarterbacks? Guys named Brady, Manning, Roethlisberger, Brees and Rodgers were among them.

Roethlisberger is a talented and accomplished quarterback, and recent history tells us that if he's healthy and clicking on all cylinders in 2013, the Steelers probably only need about 116 yards a game from their rushing attack in order to enjoy success; maybe even less--just ask the 2011 Super Bowl Champion Giants and their 89 yards a game.

When it comes to Super Bowl and playoff success, maybe an effective ground game isn't as important as which quarterback is handing the football off in-between passing plays.