Mike Tomlin says 'The Standard is the Standard,' and that is now engraved outside the Steelers locker room

A sign is now affixed outside the entrance to the Steelers locker room reading "The Standard ... is the standard." Whether that's pointed directly at the tight ends position group is a different story, but it rings even more true.

Share All sharing options for: Mike Tomlin says 'The Standard is the Standard,' and that is now engraved outside the Steelers locker room

In case anyone thought the standard was anything other than, you know, THE standard, Steelers coach Mike Tomlin had a sign created and posted near the entrance of the home team's locker room at Heinz Field, writes Tribune Review reporter Mark Kaboly, and the Steelers' twitter account gave us a look at it: 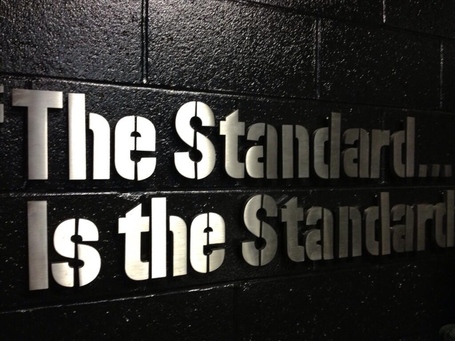 Maybe that's Tomlin's way of telling the media in advance not to expect the signings of any other tight ends, despite the fact David Paulson, in his second year, is the most experienced of the (un)healthy group.

In what was supposed to be Heath Miller, Matt Spaeth and Paulson has turned into Paulson, Michael Palmer, Nathan Overbay and Peter Tuitupou.

David Johnson will remain on the PUP list, two weeks removed from a second knee surgery, this one of the clean-up variety. Spaeth just had surgery on his foot and isn't expected to be around until fans are scraping frost off their windshields. No timetable has been set for Miller's return, and the team didn't even have Jamie McCoy (wrist) in a preseason-opening 18-13 loss to the Giants Saturday.

The standard is the standard, though. Just read the sign. It's assumed it covers the Steelers from all manner of injuries and depth chart woes.

It's also flexible. It's malleable to the point Palmer can be signed 36 hours before the game - one of two tight ends the Steelers signed in that time period - and start against the Giants. A combination of tight ends seemingly better fit for the third quarter of the preseason helped lead the first outside zone run of the Todd Haley/Jack Bicknell Jr. Era.

Even Palmer got a snicker out of it.

"We were kind of laughing about it on the field because I had the playbook for about 36 hours," Palmer told Kaboly. "I have enough experience that I know how to play the game. It is just more of putting me in the right position and the right spots."

He assuredly didn't laugh at the sign, or the fact he's at least getting a per diem to hold down the fort until any one of several injured tight ends are able to return. The standard doesn't necessarily speak to what happens when those filling in for the standard are no longer needed.

Until then, the Steelers will make do with the tight ends they have. Until a better option becomes available.