2013 Preseason Giants vs. Steelers: Breaking down the starting offensive line

The starting offensive line played 19 plays as a whole unit. Pouncey was pulled after that and the unit played another 22 snaps intact with John Malecki at center. The following is an analysis of the starters along the offensive line and it is followed by a play breakdown as an example of their overall play.

Share All sharing options for: 2013 Preseason Giants vs. Steelers: Breaking down the starting offensive line

The analysis of the offensive line starts with the most questioned position coming into the game....the left tackle.

Run Blocking: In the run game Adams looked fairly average. He didn't have any amazing blocks or any terrible ones. He displayed nice lateral movement ability when he was on the backside of the zone runs. Adams was able to easily get in front of the defensive tackle to prevent the chance of the defender making the play. As a play-side blocker Adams still needs work. It was apparent that Adams was making a conscious effort to get lower on his blocks and did well at getting his hands on the inside. Despite this better technique he couldn't move the defensive ends off the ball laterally and it was one of the causes of the smaller gaps on the left side. Adams best block came on a Dwyer run at 9:57 in the second quarter. It was a zone block to the left side and Adams was uncovered. He quickly got to the linebacker No. 57 and started to drive him backwards. Unfortunately the play-side tight end was unable to block the right DE and Dwyer was stopped for a one yard loss.

Pass Blocking: As a pass blocker Mike Adams looked much more comfortable in his second year. He was quick out of his stance, and moved well in his kick slide. Adams was patient in his slide waiting for the defender to make a move and reacting. He did an excellent job of using his long arms to his advantage. Adams also looked better in contact, keeping his feet moving and playing with a wider base consistently. Mike Adams didn't register a single pressure the entire game. It should be noted that he played a majority of his snaps against the Giants back-up DE No. 98 and their rookie DE No. 79 DaMontre Moore, because Jason Pierre-Paul and Justin Tuck didn't play.

Run Blocking: On the first running play of the game Ramon Foster looked amazing. He came off the ball , executed a brilliant flipper move into Giants defensive tackle No. 99 Cullen Jenkins. He waited long enough for Adams to get his block on Jenkins and then made it to the Will linebacker for a block.

Two plays later Foster executed a pull in which he looked a lot quicker. He moved Giants' DE No. 94 completely out of the way. Foster needs to make sure he doesn't drop his head on his pulls though as he did that in each of his pulls throughout the game. As a play side blocker he was quick enough laterally to get in front of both Jenkins and Rodgers and seal them from making a play.

Foster biggest problem was when he had to get to the 1-technique on his right side. This is because Pouncey is required to chip the one technique so that Foster can get in front of him but Pouncey had trouble doing so. Fosters' biggest problem throughout the game was his pad level. He is firing off the ball much too high but because of his strength was still able to win many of those battles. Foster was the only member of the line to attempt the backside cut block. He did so twice once opening a nice hole for Dywer on a six-yard run.

Pass Blocking: The first preseason game wasn't a horrible day for Foster as a pass blocker but it wasn't great either. He was the only member of the starting line to give up a sack and he also gave on one other pressure.

Giants DL Cullen Jenkins abused him on that sack, though. To start the play Foster incorrectly set to the outside without Jenkins making a clear indication. He then placed his hands on the outside of Jenkins. When Jenkins started to make his move Foster didn't try to close the gap between them. Jenkins slaps Foster out of the way with a powerful move and has a sack. For the most part Foster was his good old reliable self at pass blocking, he just started out rough.

Run Blocking: Pouncey's first play was a zone run to the right with Giants' DT Linval Joseph lined up on his right side. Pouncey was unable to effectively get in front of Joseph and eventually couldn't after having to step over DeCastro. On the second play he allowed Shaun Rogers to get under him and was effectively stalemated at the line of scrimmage. The very next run play (two plays later) he was able to get under Rogers and did move him two yards off the line.

Pouncey had some issues with communication and double team blocking. On a second down play at the 12:21 mark in the first quarter, Pouncey failed to chip the one technique (Joseph) forcing DeCastro into a tough situation he couldn't fix.

Later, he also passed off a defensive tackle too early and was stuck having to turn around and help Foster rather than get to the linebacker. (Shown in the play breakdown below). He routinely failed to move his man off the ball.

He came off high from the line and his hands were outside of the defender on more than one block. He looked small despite the added weight. He may want to think about adding ten more pounds. Pouncey was however his usual athletic self and he showed it in a few blocks.

On the first run of the second series, a draw, he got out nicely to the second level and blocked two different defenders. On a screen play he and DeCastro were out in the second level getting ready to set up the block, until Dwyer dropped the pass. Despite his athletic showing, Pouncey was clearly the worse run blocker on the starting line.

Pass Blocking: Pouncey didn't do anything too special as a pass blocker. He kept his head on a swivel and helped the guards when needed. He was able to play with a wide base and handle most rushers fairly well. His only spot on his pass blocking performance was against Giants rookie No. 74 Johnathan Hankins. Hankins abused him on a second down pass play at 5:46 left in the first. The defender got his hands inside and was underneath Pouncey, driving him straight back into Ben Roethlisberger. This was Pouncey's only pressure given up on the day.

Run Blocking: DeCastro's first play of the game was a rough one. He tried to help with Marcus Gilbert's block before going to the linebacker. He put his head down on this block, eventual tripped and when trying to block the LB was push over to the ground. It wasn't pretty. On the very next play, he got his hands inside Giants DE Joseph and drove him back four yards.

This would be a common theme for the night.

DeCastro looked strong in his backside down blocks and was one of the reasons Stephens-Howling continued to cut back to the right on his runs. DeCastro's highlight came at the 7:47 mark in the first where he pushed Joseph back five yards off the line. The play is broken down below.

Pass Blocking: DeCastro was incredibly good in pass protection. He moved his feet well and kept his hand inside. He was beaten once by Linval Joseph who fired off the ball and into DeCastro's chest. The play was however a quick pass and that had no effect on the QB. DeCastro allowed only one pressure all night which came on a stunt in the second quarter. It was just a hurry and Gradkowski had enough time to make it through his reads and try to hit Dwyer in the seam. Dwyer dropped the pass.

Run Blocking: When I first watched the game I couldn't believe that the Steelers No. 77 was the same Marcus Gilbert who played last year and certainly not the same guy who needed to be carted off the field after the conditioning test. It started with the first play of the game. He was incredibly quick off the line and played low. He hit Cullen Jenkins and moved him two and a half yards off the line of scrimmage before tripping. His block was a big reason why Redman gained five yards on his first carry. His night was highlighted by high effort run plays, getting to the second level and powerful down blocks to open up the backside cutback.

Pass Blocking: Gilbert''s day as a pass blocker was fairly average. He had three pressures he allowed, all hurries. The first he was too high in his kick slide and was eventually pushed back enough to hurry Ben, though Gilbert never let his man get off of him. The second pressure was on Paulson not Gilbert. Gilbert expected Paulson to chip block the Giants' DE Moore and because of this stop sliding to the outside. Paulson completely whiffed and Moore got around Gilbert. The final pressure was on Gilbert. At the start of the play Gilbert immediately set up for the outside move. Moore saw this faked outside and cut inside. Gilbert adjusted enough to prevent Moore form getting a sack but it took good pocket awareness by Gradkowski to prevent the sack. On the whole though Gilbert looked smooth in his slides, used his hands well and was patient. Gilbert looked motivated and it might be attributed to the fact Beachum received the starting RT snaps in training camp the day before.

Play Breakdown: Stephens-Howling Zone Run at 7:47 in the Fist Quarter 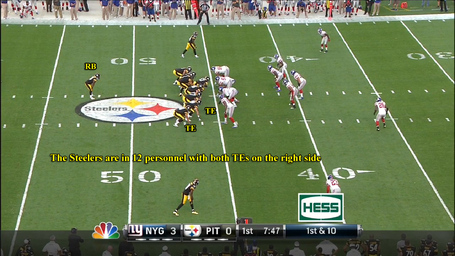 The Steelers lined up in a singleback formation with two tight ends, Michael Palmer and David Paulson. The Giants have eight men in the box they appear to be four defensive linemen and four linebackers. 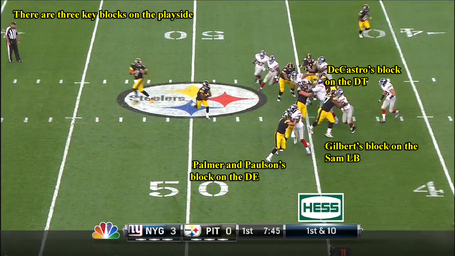 The play is a zone run to the right side. The two tight ends double team the defensive end and move him out of the way. Gilbert fires out of his stance and into the second level blocking the Sam linebacker. DeCastro continues to move Linval Joseph laterally as he begins to gain momentum. Together these three block create a nice lane that Stephens-Howling sees. 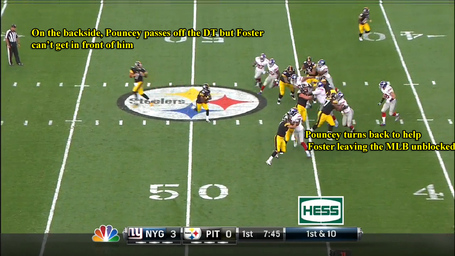 At the same time on the backside Pouncey engaged the defensive tackle very briefly then released him to go to the Mike linebacker. Foster isn't in position to make the block and Pouncey soon realizes he released the DT too early. Pouncey turns back to help Foster forgetting about the MLB. 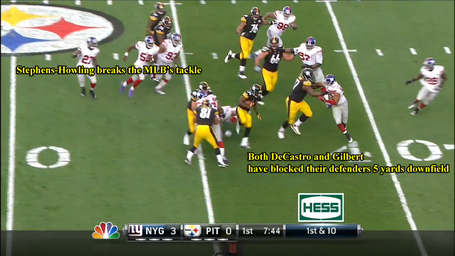 The MLB free to read the play tries to shoot the gap between DeCastro and Gilbert to make the tackle. LaRod Stephens-Howling breaks the tackle. At this point both Gilbert and DeCastro have maintained their blocks five yard passed the line of scrimmage. Stephens-Howling wants to cut inside Gilbert but the safety is there. Instead he continues outside. Unaware that Stephens-Howling is running to the outside Gilbert continues to push the Sam linebacker outside and eventually into the running back for a six yard gain.

Had the backside block been executed correctly Pouncey would have been on the Mike backer and Stephens-Howling would of had only the safety to beat. It was still a nice run considering the Giants had eight men in the box and both safeties only eight yards off the line.