Battle of the AFC North: 1st and 2nd Round Draft Picks

In which we begin the traditional lead-in to the season with the rookies. If only I could get them to carry my stuff...

Share All sharing options for: Battle of the AFC North: 1st and 2nd Round Draft Picks

Last year I decided, for some masochistic reason, to compare all of the AFC North teams position by position. It was fun, despite the vast amount of work involved, and I'm going to do it again this season unless Neal shuts me down : )

I thought about getting started, but this season there seem to be even more questions than last year about who is actually going to be the starters. So instead I decided that we would compare the draft picks and speculate shamelessly on their likelihood of making the roster.

Don't assume this is, in consequence, another fact-free post from yours truly. We'll look at college stats and so forth, and take it from there. Consider this a way to get to know our division opponents a little bit better.

One immediately notices that the Steelers and the Browns are locked in a life-and-death battle for the crown of Best Player Name. "Barkevious" takes the top honors, although "Le'Veon" would definitely have beaten out any lesser competition. But fear not, folks, I'm not going to start comparing their looks, although for the ladies I will be declaring a bonus winner of the Momma's BLA player at the end of the article. Those who are not interested can keep their eyes firmly fixed upon the stats.

Before we start the head to head comparisons, let's note that probably any of the GMs would tell you they drafted the "best player available," and therefore it is a remarkable coincidence how well each player fits his team's needs. Each of the teams not only wants to get a significant contribution from the players they picked this season, they need to do so, to some extent at least. The Browns are at the front of this competition, since they actually did get a lot of production out of Gordon in 2012.

Note that Mel Kiper disagrees with me that the Bengals needed a tight end. Has he watched Jermaine Gresham? Has he noticed that Andy Dalton didn't have a lot of good options other than A.J. Green to throw to last season? Okay, I admit that a healthy Mohamed Sanu and Andrew Hawkins should make this less of a pressing issue. I also admit the Bengals seem to enter the draft with the least weaknesses in their roster, as noted by more than one commentator. Having three picks in the first two rounds didn't hurt either.

Although such things are fairly meaningless in the long term, lets compare how the "experts" viewed each team's picks. I'm going to go with the following, as they take a range of views on the picks—Mel Kiper of ESPN, Bucky Brooks of the NFL Network, and Pete Prisco of CBS Sports.

The Ravens needed to come out of this draft with an inside linebacker and a safety, and with their first two picks, they got two really good players at those positions.

The Bengals somehow didn't address a pretty big need early (and they don't have many) and still really impressed me. The pick of Tyler Eifert is just a steal (I had him No. 8 on my final Big Board)... Giovani Bernard gives them a new dimension in the run game, ironically because he can actually catch the ball.

[The Browns'] first pick was Barkevious Mingo, a player I'm at once infatuated with as a talent, but skeptical of because of what I considered production that didn't match up with his talent...The lack of a second-round pick really hurt the Browns, who could have used a higher-rated guard..

I love the selection of Jarvis Jones in Round 1. We're talking about the most productive pass-rusher in college football over the last two seasons, and he did it against the best competition...The Steelers also got a running back, I just thought Le'Veon Bell was a bit of a reach. I'll say this for him, however: Bell played behind some pretty awful blocking last year and still managed to be productive.

Kiper's overall grades for each team: Ravens, A-, Bengals A-, Browns C+, Steelers B

Safety Matt Elam replaces Bernard Pollard as the designated tough guy in the [Ravens'] back end, bringing better ball skills and awareness. Brown, a plug-and-play starter at inside linebacker, has the athleticism to rack up gaudy production as a sideline-to-sideline playmaker.

Cincinnati add[ed] explosive playmakers in Tyler Eifert and [Giovani] Bernard to an offense brimming with talent. Cincinnati is in a position to be a legitimate contender in the AFC for years to come.

[The Browns] landed a pair of potential impact defenders in pass rusher Barkevious Mingo and cornerback Leon McFadden. Mingo in particular is an athletic freak with the speed and quickness to creat dusruption of the edge. Now, he is not polished as a rusher at this point, but his overall athleticism could shine in defensive coordinator Ray Horton's aggressive scheme.

The Steelers grabbed one of the most productive pass rushers in the draft in [Jarvis] Jones. Jones' disruptive game is reminiscent of former Steeler James Harrison, which makes him a viable candidate to start as an edge player. Le'Veon Bell is a big back with quick feet and outstanding instincts. Additionally, he is a natural pass catcher with the receiving skills to play a prominent role in the pass game.

I love second-round linebacker Arthur Brown. He is a perfect Ravens style of player. He will step in and start right away...Getting Matt Elam (first) and Brown will really amp up the defense.

I don't usually like taking backs high, but Giovani Bernard in the second round is perfect for this team. They need a space back, and he is that...It's not that first-round pick Tyler Eifert isn't a good player, but they already had Jermaine Gresham. Then again, there aren't a lot of holes on the roster.

Taking Barkevious Mingo in the first round is questionable. They had two outside rushers and had some other bigger needs. He's a good player, but not a great fit [for the Browns].

[I didn’t like] taking Michigan State running back Le’Veon Bell in the second round. I just think he takes too long to get to the line of scrimmage. He is more of a plodder...[Steelers] General manager Kevin Colbert is one of the best in the business. He likes picking productive college players. First-round pick Jarvis Jones was that and more. The Bell pick lowers the grade.

On to the stats. I freely admit it's hard to compare players across college programs, but we have to start somewhere. First, let's dispense with Matt Elam, as he is the only defensive back taken in the first two rounds. (I only hope the Steelers can dispense with him this easily : ) I decided to compare Elam's numbers to a couple of the best safeties to come out of college in the past several years, so here goes:

I hadn't realized Thomas was redshirted his first year, so only had two years in which he played. Incredible!

As we compare these three players we note that Elam had more sacks than either (Thomas had none) and slightly more tackles than Thomas. One category not on the charts is touchdowns. As mentioned above, Elam had none. Thomas had two in two years, Berry three in three years.

Take all this for what it's worth. Although Elam doesn't stand out above Berry and Thomas, that's some pretty elite company to be in.

Since we started with the defense, we might as well stay there. Next we have a slew of various varieties of linebackers and a defensive end. Since they played different roles in different schemes it is perhaps difficult to directly compare them, but what's the preseason for, after all?

Since I began doing this with the safeties, I'm going to continue with the comparison to a previously drafted player, in this case J.J. Watt.

Arthur Brown appears to be a late bloomer. The only five-year player on this list, he redshirted his first transfer year at Kansas (between year two and year three on the charts.) Obviously these players all have different styles, but it is still interesting to compare their numbers. Watts only played two years on defense—in his first year he played tight end, so defense was new to him in the first year that shows on the charts. Also amazing...

On to the offense. First, the running backs:

Giovani Bernard redshirted his first year because of an ACL tear sustained at the very beginning of the season. The return statistics are kick returns for Richardson and Bell and punt returns for Bernard, as they appeared to specialize in college.

And finally, the receivers. I didn't know whether it would be fair to compare a tight end and a wide receiver, but I did it anyway and the numbers are not so very dissimilar:

Josh Gordon is obviously a talented young man who can't seem to get his act together. His second drug violation in college resulted in him being suspended from the program. He will begin this season with a two game suspension for a further drug violation.

Tyler Eifert compares very favorably to 2012 tight end Coby Fleener, although Fleener was, of course, a high second round pick.

Now for the shameless speculation. It isn't really speculation, given that these are all high draft picks. In the case of the offensive players, it would be surprised if they didn't make the roster, unless it was a question of injury.

As for the defensive players, while most of them might not be named the starter at the beginning of the season, I would expect them to see significant playing time by the second half of the season at the latest.

Probably the exception to this is Margus Hunt. The Bengals seem pretty deep on the defensive line and there might not be room for him. Furthermore, Hunt is relatively inexperienced. It seems as if the Bengals took him as a project, and aren't in a rush to get him on the field.

That will do it for today. As always, I welcome comments from fans of other teams, or clarification about players your team drafted. As Coach Tomlin says, "Iron sharpens iron," and I look forward to our rookies sharpening each other on the field.

Bonus No. 1: This was a comment to the Brooks article, by commenter Jesse Smith:

Thanks to Mr. Smith, whoever you are, for a much-needed chuckle today...

Bonus No. 2: Here it is, ladies. The competition was fierce, but after much deep study I declare Arthur Brown to be the Best-Looking Player taken in the first two rounds of the 2013 draft by the AFC North. He had some really fierce competition, most notably from our own Le'Veon Bell and the Browns' Barkevious Mingo, but Brown manages to combine a well-toned physique with an almost bookish demeanor. I hereby give you the evidence: 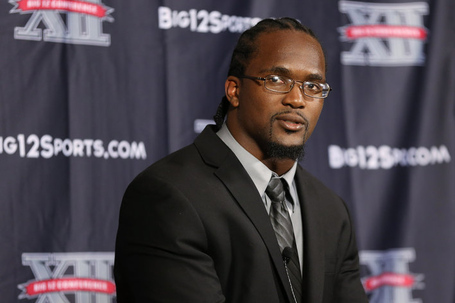