Are the Steelers injury-prone? An in-depth look at the answer

For several years now Steeler Nation has been fervently waiting for the Steelers to take the final step on the Stairway to Seventh Heaven, only to watch them fall back battered, bruised and injured. Are the Fates toying with the Steelers because of our hubris, or is the Steelers’ rate of injuries on par with the rest of the NFL?

Share All sharing options for: Are the Steelers injury-prone? An in-depth look at the answer

For many, the failure of the Steelers to take that final step is attributed mainly to injuries to key players such as Ben Roethlisberger, Troy Polamalu, LaMarr Woodley, and James Harrison, or to multiple starters on the Offensive Line such as Willie Colon, Marcus Gilbert, Maurkice Pouncey, or David DeCastro.

In trying to come to terms with being just "an injury away" from the team's seventh Lombardi, many have questioned whether the Steelers have endured more than their fair share of injuries as compared to the rest of the League. While the information necessary to answer that question is not readily available to the public, I have found some data that, with some caveats, may put the minds of Steeler Nation at ease.

The source of my information is Football Outsiders ("F.O."), in the form of their metric AGL which stands for Adjusted Games Lost. I have serious doubts and issues with many of the prognosticative powers of many of the metrics F.O. and other adherents to sabermetrics have devised, as you can read here:

However, there is little to doubt in their ability to mine the raw data necessary to address a question such as how the Steelers compare in terms of rate of injury, and if you're willing to accept their data at face value as I'm forced to do, let's continue exploring this issue.

According to F.O., their Adjusted Games Lost metric is described as:

Adjusted Games Lost (AGL): Measurement of the cost of injuries, both in terms of missed games and games where players were not able to play to their full potential. Estimates a number of games based on whether players are listed as Probable, Questionable, Doubtful, or Out.....AGL uses the injury report, the status and relevance of a player to his team, and historical data regarding how likely a given player is to play [based on how player is listed on injury report] to produce a measure of how dramatically a team is affected by injury.

I have chosen to limit the AGL data collected to just during Mike Tomlin's tenure as head coach. I don't know if going further back would materially change the final results, but we're in the Tomlin Era and so the question is moot for previous dynasties.

According to F.O., the 2012 season experienced the highest number of player games lost since 2002, and continued the rising trend identified in their 2011 AGL report (how this reconciles with Mr. Goodell's claim of fewer injuries is fodder for another article). F.O. attributes the increase from 2010 to 2011 in AGL to the lockout, but doesn't opine as to the reasons for the overall increase in injuries over the entire 11 year span.

Now, to the question most important to Steeler Nation: Are the Steelers cursed by injuries? 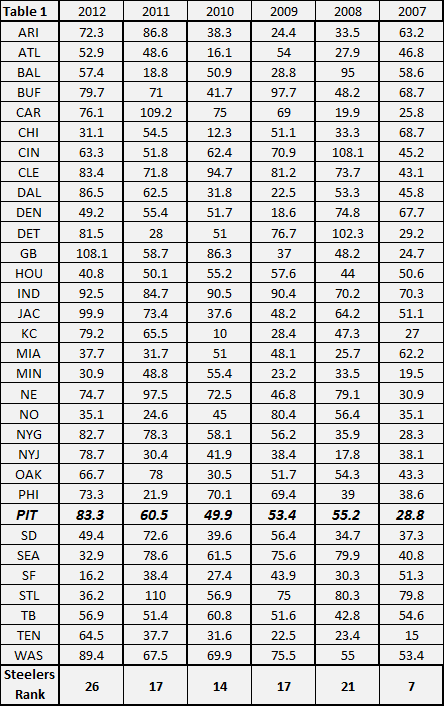 A couple of rather interesting things pop up looking at this table. In Tomlin's first year as head coach (2007) it is well known that he ran a hard and physical training camp, for both rookies and veterans, and that after the surprising loss to the Jacksonville Jaguars in the first round of the playoffs, Tomlin admitted many of his veteran stars were "worn out" by the end of the season...and yet the Steelers apparently had the seventh lowest number of injuries in the League that year.

Conversely, in 2012 the Steelers were ranked 26th in AGL, meaning only six other teams had more player games lost than the Steelers and yet Tomlin felt changes needed to be made in the way training camp was run in 2013 to address issues he and the coaching staff felt resulted in a dismal 8-8 season.

The folks at F.O. do not believe the AGL is a cumulative factor, meaning they believe each year stands on its own and does not influence the following season. There are other more esoteric things they believe metrics such as AGL impact, but that is beyond the scope of this article.

As to the question of whether the Steelers are historically more impacted by injuries than other teams, we have to apply some statistical tools to this historical data.

If you recall from my "From Bell Curves to Le'Veon Bell: A reason to have faith in the Steelers' Draft" article that when you are dealing with multiple years of data for multiple teams, you need to figure out where in relation to the average the Steelers fall in terms of injuries; to do this we need to calculate each team's Z score to determine where a team like the Steelers ranks overall for the entire period. The Z scores determine how far a particular team is from the group Mean (average) for the particular period in question.

For those of you keeping score at home, the Z score formula is: (TeamMean - LeagueMean)/League St. Dev, where TeamMean is each team's average AGL score; LeagueMean is the average of all teams' AGL for the entire six year period; League St. Dev is the Standard Deviation, or the measure of the dispersion of the numbers from their expected (mean or average) value of all 192 AGL scores (32 teams x 6 years).

Each team's Z score determines how superior or inferior its average AGL is as compared to the average of the group of 32 teams as a whole, based in units of the group's standard deviation.

In simple terms for this analysis, the team with the lowest Z-score ranks as the team that has suffered the fewest number of player games lost due to injuries as compared to NFL average as a whole; the team with the highest Z score has suffered the most to injuries. As a test on the Z-score calculation, if you add up all of the individual Z-scores of a sample set, it should total zero.

Here is all 32 teams' Z scores. They are ranked from lowest to highest, with negative scores indicating fewer injuries than the league norm and the lowest score (the Tennessee Titans) indicating that team has suffered the fewest player injury games lost of any team in the NFL since 2007.

As you can see, the Steelers fall into the bottom half of the league in terms of suffering injuries, ranking 19th for the period of 2007 to 2012, but not nearly as bad as the Indianapolis Colts. One point of interest is that the Steelers have the lowest level of injuries of all the teams that exceed the league average, and within the AFC North, only the Baltimore Ravens have suffered fewer injuries than the Steelers. The Steelers Z score of .03 indicates that the Steelers suffer very close to the League average as a whole in terms of player games lost due to injury.

Another way to view this is to graph the results. The first graph is just the NFL. What the vertical blue bars underneath the bell curve tell us is that on average, 99.7 percent of all the teams' AGL scores for all six years fell within the three standard deviations of the league average AGL of 54.5. 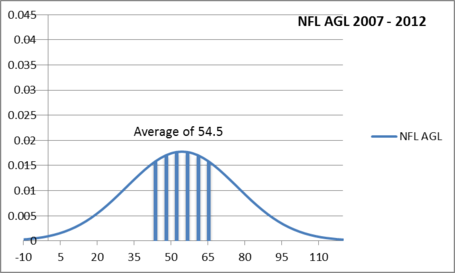 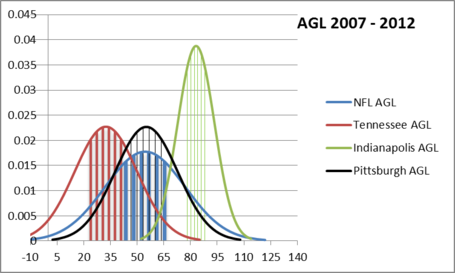 The vertical bars for all three teams indicate where 99.7 percent of their six years' worth of suffering from injuries falls, as compared to the NFL average. As mentioned above, you can see the Steelers' score of 55.2 falling within the League average; the Steelers' slightly narrower curve is the telltale sign that the deviation (17.58) from year to year in terms of the number of lost games is less than the league average deviation of 22.45. This means, unfortunately for the Steelers, that the team experiences, on average, about the same number of injuries year after year, a consistency I'm sure they'd prefer not to enjoy. While they don't suffer many more injuries year after year than the rest of the league, they also don't catch a break and suffer a statistically meaningful number less either.

Then you have the Colts; talk about an unwanted consistency. The deviation in their AGL scores is 10.29, less than half of the league's range of deviations, as can be seen from the tall narrow shape of their graph. Unfortunately for the Colts, their average rate of players games lost over the six seasons is 83.1 and such bad luck fluctuates even less than the Steelers.

In summary, it appears that the Steelers incur about the league average in terms of the number of injuries, as based on the definition of F.O.'s AGL metric. It will be interesting to see whether the off-season conditioning message the Steelers' head coach and Front Office sent the players, and the increased physicality by which Tomlin is running this year's camp will garner similar results at the end of the season as the Steelers enjoyed in Tomlin's first season in terms of total players games lost.

P.S. Here are two tables ranking the teams in terms of Offensive Unit and Defensive Unit for the years 2007 to 2011 (2012 data not readily available in a form usable for this exercise).

From 2007 through 2011 it appears the Steelers' defensive unit has been far more healthy than the offense, which makes sense considering the ongoing offensive line issues and Roethlisberger's ability to stay healthy the past few years; remember, the AGL factors into its equation the relevance of a player to his team, and thus any time the Steelers are without their franchise quarterback is going to have more of an impact on their AGL score than the loss of most any other player.