Pittsburgh gets another class of 2008 running back in Felix Jones

Rather like Rashard Mendenhall, the back he preceded in the 2008 draft, Jones has never really lived up to his pre-draft hype. Is Pittsburgh giving him the opportunity to prove the naysayers wrong?

Share All sharing options for: Pittsburgh gets another class of 2008 running back in Felix Jones

In the 2008 NFL Draft the teams drafting at picks 22 and 23, the Dallas Cowboys and the Pittsburgh Steelers, each drafted a running back. A boatload of backs were available, and two had already been taken—Darren McFadden, who went to the Raiders, and Jonathan Stewart, who went to the Panthers. So the Cowboys took Felix Jones, the Steelers Rashard Mendenhall.

Hindsight is 20/20. McFadden, taken fourth overall, has certainly been serviceable. The same could be said for Stewart, who went with the 13th pick. Both Mendenhall and Jones had moments when it seemed as if they were going to fulfill their promise.

But the four running backs from the 2008 draft to have achieved the most success were taken in the second and third rounds, with the exception of Chris Johnson, who was drafted immediately after Mendenhall. The other three backs were naturally, Matt Forté, Ray Rice,  and Jamaal Charles. These eight men were in the first nine running backs taken in that draft.

Let's look at some quick comparisons of those eight backs. The statistics are taken from Pro Football Reference:

You can't make the club from the tub, unless you're a high round draft pick. Although it's not a direct correlation, there is a certain similarity between how many games a player started and their Career Approximate Value. 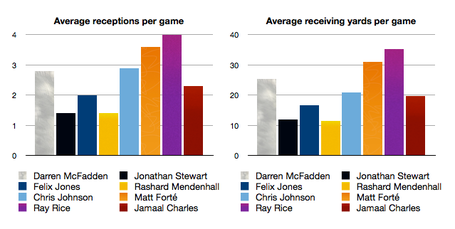 As these charts indicate, neither Jones nor Mendenhall are the most durable or the most productive backs taken in the top end of the 2008 class.

But let's compare them to a couple of backs who are more to the point in this discussion.  How do they compare to Isaac Redman and Jonathan Dwyer, the backs who I presume are the Steelers' Game One starters? Because neither Redman nor Dwyer were high draft picks, some of the stats such as games started are not really equivalent. And neither Redman nor Dwyer has been in the league as long. Therefore I compared them a bit differently:

Although Mendenhall had a great many more yards on average than any of the other backs, he curiously has the lowest figure of yards per attempt. Felix Jones, on the other hand, has distinctly more. It would be interesting to know whether this is because Jones is better or because Dallas's offensive line was better. Hmm...

Here's a result which greatly surprised me. I never would have guessed Isaac Redman would have the most receptions relative to his playing time. However as we can see in the second chart, once they got the ball the results were quite similar, at least in terms of yards gained, with the exception of Jonathan Dwyer. But how well did they hold on to the passes they were thrown?

Both Mendenhall and Jones have a lot more total pass attempts than either Isaac Redman or Jonathan Dwyer. The chart on the right is somewhat deceptive, as in the most comparable year, 2012, Dwyer and Redman both had 18 catches for 20 "catchable passes" (as per Pro Football Focus,) and Jones had 2 drops in 27 catches. Mendenhall held on to all of the nine passes thrown in his vicinity. Jones, however, has had the most targets in his career, and the lowest drop rate overall.

Redman rules, although the latter statistic is perhaps not one he would like to be known for.

Does Felix Jones represent an upgrade over the backs we already have? Therein lies the rub. Are three frequently injured backs better than two? Does Jones' pedigree indicate he might be able to do something for Pittsburgh he was never able to do for Dallas? It would be an interesting and compelling story if both he and Mendenhall parlayed their fresh starts into better career numbers. If I'm betting on one of them, though, I would bet on Mendenhall. This isn't to say Felix Jones has no chance to make an impact in Pittsburgh. However, his past performance doesn't make one unduly optimistic. C'mon, Felix, prove me wrong.

Adrian Robinson for Felix Jones Trade: Everything we know