Their career as a member of the Steelers is about to come to an end for 15 players on Tuesday. Here's a look at the men who could make it all the way to the regular season.

If the third week of preseason action is a glimpse into how team's intend to use their personnel in the regular season, the Pittsburgh Steelers gave us a glance on how they may setup their final 53-man roster. 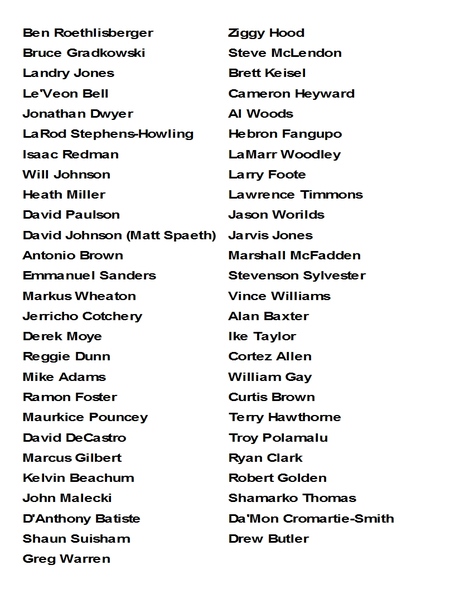 This is far from a prediction as the Steelers still have one more preseason game to play. While the fourth week is usually played by players about to be unemployed, a few positions have yet to be settled.

Felix Jones played as well as one can for being with his team for less than 24 hours before his first game. Depending on the health of injured backs Le'Veon Bell, Isaac Redman and LaRod Stephens-Howling will dictate whether Jones can survive final cuts, despite contributing to the offense and special teams. Redman has the most reason for concern after missing two straight weeks after suffering a shoulder stinger in practice after the New York Giants game. Baron Batch is out of time. Alvester Alexander and Jeremy Wright will compete in Week 4 for a practice squad spot, if there are any to be had for running backs this season.

Antonio Brown and Emmanuel Sanders are locked into the final roster. Markus Wheaton is a shoe-in to make the team, although whether he will be the third or fourth has yet to be determined. Beyond them, it's anyone's guess. Jerricho Cotchery looks to be the fourth, although with the performance of Derek Moye against the Chiefs and Justin Brown in the first two games and training camp, Cotchery's name can be added to the speculation of Jonathan Dwyer or Isaac Redman being cut by season's start to clear cap space to offer someone an extension, like Sanders. Justin Brown had zero catches against the Chiefs and may have been passed by the bigger Moye. Reggie Dunn continues to do everything asked of him well, and is every bit as deserving of a returner's spot as Chris Rainey was in 2012, even if he doesn't take the field with the offense as a receiver. J.D. Woods and J. Brown look like prime practice squad candidates.

Kelvin Beachum's participation at TE against the Chiefs further fuels conjecture toward Heath Miller beginning the season on the roster and not the PUP list. David Paulson and David Johnson will most likely hold the other two spots, with Matt Spaeth taking Johnson's spot when he returns mid-season after being designated for return from IR. Jamie McCoy is probably the Steelers' scout team TE. Michael Palmer will have one more week to seize Johnson's spot. Nathan Overbay and Peter Tuitupou are likely cuts on Tuesday.

The Steelers have seven productive linemen, but they will probably carry eight on the roster. Joe Long has been finding snaps with the second string, but has not been impressive enough to warrant a gameday spot. Guy Whimper should be one of Tuesday's cuts, along with Mike Farrell. Joe Madsen may stick to play center in the fourth game before being released. If the team keeps eight men, the final spot may go to D'Anthony Batiste, who could hang on. Not that he's been overly impressive, but he has remained invisible, which at this point is a good thing. He will most likely be an inactive gameday member unless someone else gets hurt.

Alameda Ta'amu couldn't get on the field against the Chiefs; Hebron Fangupo did. It's beginning to look like the team could carry six DL on their roster, with Fangupo inactive because of Al Woods involvement at nose tackle in addition to his end responsibilities. Ta'amu may still make the scout team, but ends Nicholas Williams and Brian Arnfelt seem to be leading the race, and the team is not likely to carry three DL on the practice squad.

Behind the starters and first-round draft pick Jarvis Jones, this depth chart is wide open. Alan Baxter has been convincing enough for the team to ship Adrian Robinson to the Philadelphia Eagles. Chris Carter has been convincing enough to believe he won't make the team, although he remains higher on the depth chart than Baxter for now; but Baxter keeps putting his motor on film, and may not survive a cut to get him on the practice squad. If the team wants to keep him around, they may need to make him the fourth OLB, even if he's inactive on gamedays due to his lack of experience. Brian Rolle was impressive inside in the first two games, but was invisible against the Chiefs. Sylvester did not play, but may carry the same benefit of doubt as running back Redman with veteran experience and his ability to play inside and outside positions. Kion Wilson is still trying to supplant someone above him.

We could see a battle between safety Da'Mon Cromartie-Smith and cornerback Josh Victorian for one of the last roster spots. Victorian has been hot and cold this preseason, but a missed tackle which allowed a special team's TD and a penalty which negated a Jarvis Jones interception may undo him like David Gilreath's muffed punt undid him. Isaiah Green did not dress against the Chiefs despite having a good camp. He may also be fighting with Victorian, only for a scout team seat instead. Considering the deeper members of the secondary need to play special teams, Victorian's failed tackle will not help his case.

Brian Moorman was brought in because Drew Butler was inconsistent last year.  Shanking a punt which resulted in points for the Chiefs makes Butler more attractive due to his age.