The two may seem unrelated, but both were discussed in a series of related studies on sports marketing analytics, conducted by Emory University's business school.

Share All sharing options for: Steelers rank 1st in "social media equity" study, while Heinz Field tickets may be underpriced

In an effort to assess which NFL fan base is the most loyal and supportive (pro tip: answer should always be Steeler Nation), Emory University professors Mike Lewis and Manish Tripathi have embarked on a series of studies. Their most recent one looked at how the number of Twitter followers for official team accounts differed from how many were predicted by their data model.

Yes, the Pittsburgh Steelers did finish first overall, with the Cowboys, Patriots, Packers, and Saints rounding out the top-5.

And with two earlier sets of results ranking fan equity that somehow did not place Pittsburgh in the top spot (which should immediately indicate that some part of the rationale was flawed), we can say that third time's the charm and the professors finally redeemed themselves.

They also suggested a rather interesting theory: the Steelers may systematically underprice instead of trying to maximize revenue from ticket sales. It is certainly a bold notion at odds with the conventional wisdom that the NFL is just another business purely about revenue, although it may not come as such a surprise to us fans who are more in tune with how the Rooneys operate their franchise. But to understand how the professors reasoned that, we have to look closer at their previous results (the clearly flawed ones that did not put Pittsburgh in the top spot).

The basic notion of their studies is that factors like winning percentage, pricing of tickets, stadium capacity, and metro area demographics (like population, median income, and a few other things) can all be combined to predict a marker of success, like how much revenue a team is making in ticket sales. Or the model can be altered to predict how engaged the team's fan base is through social media by removing stadium capacity and ticket prices from the equation (since they are not relevant in the wide world of the interwebs). The rationale for analysis is then that any discrepancy between the predicted revenue/follower count and the actual numbers would indicate the strength of a team's fan loyalty -- thus giving a relative sense of a factor that cannot actually be quantified.

In their first model, which just examined the past three years, the Cowboys somehow wound up on top while the Steelers were 9th. 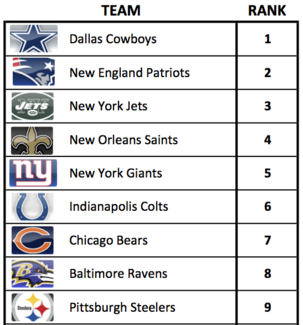 And sitting behind the Ravens too? That's adding insult to injury.

Let's get some 'splaining from the professors for at least the Dallas part:

Over the last three seasons (the time period used to calculate fan equity) the Cowboys have played sub .500 football but generated above capacity attendance (at least according to ESPN).

It makes a bit more sense considering that the model rewards continued sell-out crowds during disappointing times -- the Cowboys have a win percentage of 0.458 from 2010-12, while the Steelers have a win percentage of 0.667 over the same span. Fortunately, Professor Lewis grew up as a Steelers fan in the '70s, and we trust he could not rest until Dallas was evicted from the top spot.

In their second model, which extended the period of evaluation to the past decade, the Patriots came in 1st while the Steelers were 5th. 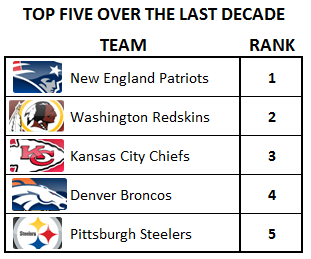 To explain why teams that conventional wisdom would typically place at the top of the fan-loyalty list were still falling short in their models, the professors conceded that a significant limitation to their method was operating under the assumption that all teams are trying to maximize their revenue. (They use the Packers as an example, but we don't serve their kind here, so an improvement was made to the following excerpt.)

This leads to the question of why don't teams like the Packers Steelers price higher. I can think of a couple of potential answers. One, perhaps they don't have enough information or expertise to maximize revenues. Demand forecasting for an NFL stadium is a non-trivial task. Historical data is of limited use because demand for certain types of seats is censored. The variation in the quality of tickets is also a problem as revenue maximizing teams would also need to understand the cross-elasticities across ticket types.

But the salient question is: if not a revenue maximizing assumption then what? The best answer, we believe, is that some teams may systematically underprice in order to build or invest in their customer base. The logic is that because the team lacks an extended tradition of success or that the team competes locally with other sports offerings, it makes sense to charge below market rates to get people into an exciting, sold-out stadium. Of course, as more astute readers may have noticed, this explanation is also consistent with the story that the team lacks brand equity. We could also make arguments that some team price too high and may therefore be "harvesting" brand equity.

That absolutely could make sense for organizations that are at a low point and flirting with local blackouts of game broadcasts, or even ones like the Falcons who are trying to maintain their recent surge in popularity. Unfortunately, that logic of trying to build brand equity back up through underpricing absolutely does not apply to the Steelers -- who do have an extended tradition of success and have been sitting at the top of the heap of Pittsburgh's sports offerings for decades. If the Steelers are still underpricing home games, there must be another logic for their continued investment in their customer base.

As a fan that will proudly chase one shot of Rooney Kool-Aid with another, I would like to believe that they have never set out to draw up a game plan to maximize revenue from ticket sales. But the realist in me knows they certainly keep having talks for how they can keep increasing said ticket revenue - that is what the raising of ticket prices just last year was all about (which marked the fifth time in eight years), plus the pending 3,000-seat expansion to Heinz Field (and the dispute over who should actually foot the bill for it).

I would wager that the Rooneys do place great value on the Steelers' active streak of selling out home games that dates back to 1972 (certainly for the environment the fans create, but also as a point of pride), and are quite wary of price hikes that are too high, too fast and might jeopardize the run that's going on 41 years. That kind of streak only happens when there is an uncommon stability to the organization, the kind that begins with ownership that has strong ties to the community and which does not change. There are reasons why the Rooneys are as respected and beloved as they are, while the Dan Snyders and Mike Browns of the league often find themselves at the other end of the spectrum.

Regardless, it's an interesting series of studies from the Emory professors. Now what they need to do is find a way to take into account who fans in the stands are actually rooting for (regardless of which team is "at home"), and then let us know how wide the margin is between Steelers fans in attendance at games and whoever comes in second.