A Steelers’ transition by any other name is just as sweet

Are the Steelers in transition or is what we’re seeing merely the continuation of the “Steeler Way” of a team coming off of an 8-8 seasons, which followed a Tebowing from the playoffs the year before?

Share All sharing options for: A Steelers’ transition by any other name is just as sweet

What's in a name? that which we call a rose

By any other name would smell as sweet;

Change in all things is sweet. - Aristotle

Excitement was palpable during the NFL Draft when for the second year in a row a player, Jarvis Jones, joined David DeCastro as a highly rated player much coveted by the Steelers that actually fell to them, and amidst the mid and lower tiered draft picks the names of players with captivating skills and unlimited promise like Shamarko Thomas, Justin Brown, Terry Hawthorne and Vince Williams and were called to the podium by the Steelers.

The ensuing "dead months" ratcheted up the tension caused by anticipation, with little release during mini-camp and OTAs (since football in shorts is not really football) until finally, as unfailing as the swallows returning to Capistrano, or the buzzards to Hinkley, the Steelers finally returned to Latrobe to open training camp.

And yet, back in February during the NFL Combine, Steelers GM Kevin Colbert denied the team was in transition. Many in Steeler Nation have defended that position, sticking with blind faith to the assumption that all that was necessary was to have a good draft, replace a few players, stay healthy and the team would soon return to dominance in the AFC North and be in contention for its seventh Lombardi.

Kevin Colbert Combine Press Conference: We are not a team in transition. We are comfortable. 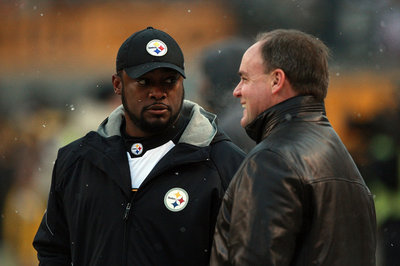 Transition apparently is an unacceptable word around the South Side facilities, just as rebuilding is an unacceptable concept within Steeler Nation. Euphemisms like "re-tool" or "re-load" are used by the team and Steeler Nation because apparently acknowledging that they have to react to things that impeded the team's success the prior year are not in keeping with our mental image of what the Steelers are supposed to represent; a team and organization par excellence, a team that is immune to the ravages of time and age and, dare I speak it, of the need for change.

Oh how us elders of Steeler Nation suppress the 80's and early 90's, and the younger members ignore or dismiss those dark ages as not being pertinent to their fandom today. But as the saying goes, those who ignore history are doomed to repeat it. Chuck Noll won four Super Bowls in six years, and had in his 1976 team one of the greatest defenses of all time. Yet by the mid 1980's the team began its decline into mediocrity; its record for that decade was 77-75. Why? Because as the game itself began to change, the Steelers did not; as the league began its long transition into a passing league, the Steelers did not transition with it.

If you do not change direction, you may end up where you are heading. - Lao Tzu

No, tis better that we indulge ourselves in the Orwellian practice of doublethink lest in our word choices we allow a tendril of doubt gain a foothold on the beachhead of our denial that our team, yes our Pittsburgh Steelers, may as an entity be susceptible to the encroaching forces that affect all teams, that the team that we hold in our minds may in fact be...mortal.

But why do we do this? Is it our fear of admitting that things must change, must transition from what was, from what first captured our hearts about the Steelers, to what shall be, must be in order for the team's long run of success to continue? Change happens all the time; players leave due to free agency, injury, or that which none shall escape, simply age. And isn't such change a transition in and of itself?

Do we really think that once the inevitable happens and our Hall of Fame Defensive Coordinator Dick LeBeau finally retires, that the next man to fill that position will run the defense the exact same way, that he won't want to implement his concepts, his ideas of what the player on the roster are cable of doing? Do we think that when franchise quarter back Ben Roethlisberger, or our once-in-a-generation free safety Troy Polamalu, finally do retire that the Steelers will simply replace them with another player who can continue doing all the amazing things they've accomplished even if LeBeau is still the DC or the offensive scheme tailored to Roethlisberger is retained? Surely we aren't deluding ourselves that much. No, we all recognize that once Roethlisberger ends his career, a new offense will be required to fit the skills of the "next QB up", and when Polamalu has played his final game, then the Steelers defense will perforce have to change, to transition itself to accommodate the talents of the next man to roam the Steelers secondary, just as it did in the first Cincinnati Bengals game of 2012 when LeBeau made a change in the way the secondary played in Polamalu's absence and from there the Steelers defense rose to be number one against the pass and second against the run.

So why do we fear hearing the word "transition" so much? Is it our fear of what the unknown future will bring; is it that natural Pittsburgh characteristic that no matter how good things might be going, something is always "not quite right"? Or is it a fear of having our team potentially sliding back down to the pedestrian level of the majority of teams in the NFL, or even worse, entering into another 80's dark age? Is it the fear that the glorious ride of three Super Bowls and two Lombardis in eight years may finally be over? If it is that, then how does that correlate with our often exclaimed faith that "in the F.O. we trust"; isn't that fear of the team being in "transition" actually a crack in the foundation of our faith?

Even more than a vacuum, life abhors stasis. When mountains cease changing height, they begin to erode; when water in a fish tank is not changed, it becomes stagnant; and when organisms such as a collective group of people gathered to function as a whole fail to change, to transition, they become stale, predictable and thus vulnerable.

So what's wrong with saying the Steelers are in transition? They are, though our self-denial may blind us to the obvious facts.

Without change, something sleeps inside us, and seldom awakens.

The sleeper must awaken. - Frank Herbert

Look at what we're seeing and reading about the Steelers after only two weeks of training camp:

* Numerous observations have been made on the slimmed down physiques and improved condition of the players as they began camp:

* We're seeing national sports writers like Peter King who have visited Latrobe countless times, come away and publicly comment on the fact that out of the many camps they've been to this year, only the Steelers are practicing hitting each other so early in August.

* We're hearing from some of the veteran players themselves about changes they're seeing in how camp is being run; in Head Coach Mike Tomlin's attitude, and in some of the new things they're focusing on in practice.

* We're hearing from the players themselves on aspects of the Steelers'game that are different, that are changes from years past.

More: Defensive ends will get after passer more/ Steelers offense to be faster-paced than ever

Instead of fearing change, we should embrace it. When Tomlin held his first training camp after succeeding Bill Cowher, he ran the veterans hard. After the first round playoff loss to the Jacksonville Jaguars that year, Tomlin and several veteran players admitted that the team was by that time worn out. So what did Tomlin do the next year? He changed the way he ran training camp. His perception of how it should be run transitioned from being exhausting, to one where he recognized that some of the older veterans didn't have to be treated as rigorously, and when faced with one of the most difficult schedules in league history in 2008, the Steelers had enough left in the tank to hoist their sixth Lombardi.

Maybe the one constant we should all focus on; the one thing that signifies that no matter what might change, Mike Tomlin will be the Steelers head coach. Above all else this remains true of the Steelers, their head coach is allowed to be human. They have had only three head coaches in the past 44 years. He is allowed to have bad years because the Rooneys and Kevin Colbert recognize that circumstances do change from year to year; the game itself and the team both undergo transitions over time. Players who excelled one year might not perform to the same level the next; that fate, luck, calls from the referees might not fall the Steelers' way every time. And in having such a realistic, long term view, the head coach for the Steelers knows he doesn't have to look over his shoulder or worry about his resume. A Steelers head coach knows that he doesn't have to be reactionary, or "win now". No, a Steelers' head coach like Mike Tomlin is assured that his bosses respect him as a man capable of recognizing when change is required, when transitions are called for, and so a Steelers' head coach is allowed to think long term, to plan for the future, to transition himself, his coaches and his game plans to change as his players transition from rookie, to starter, to aging veteran, to a retired player.

Things alter for the worse spontaneously, if they be not altered for the better designedly.- Francis Bacon

What's in a name? that which we call a rose

By any other name would smell as sweet;

Without that title. Transition, doff thy name;

And for that name, which is no part of thee,

Take the seventh Lomardi all thyself.