Why all the injuries in the NFL?

Part 1 of 2, in which the author ponders some possible reasons for the spate of injuries throughout the NFL, and (eventually) argues for a possible solution.

Share All sharing options for: Why all the injuries in the NFL?

About a week ago, Ivan Cole noted the following in his NFL Week 1 Review:

[I heard a] report that in spite of all the changes made through the new CBA that season ending injuries in the NFL were up by over 29 percent.

Obviously this is something of great concern to the Steelers. Despite making it through Week 2 without any new major injuries, other than to the collective psyche of Steeler Nation, this is a huge issue, especially if the report is correct. In the wake of the many CBA provisions which mean teams are necessarily less prepared, both because of reduced practice time and reduced numbers of contact practices, the fact that serious injuries are substantially increasing is incredibly ironic.
Since the Steelers have suffered what is a greater-than-average number of injuries to key personnel in the past several seasons, a great many words have been written on the subject. I'm going to write some more.
Tunch Ilkin of the Steelers Network has commented before that the increasing size and speed of players is bound to create difficulties. This can take two forms. I will address the easier one first.
One of the things I believe has been a problem for some players has been that they are carrying more weight than their frame is able to handle. I suspect most of us believe that the average NFL player is a superb physical specimen, bulging with muscles and carrying little excess weight. That statement is certainly half true for most players, and fully true for some.
A player like Ike Taylor, for instance, probably has little excess body fat. It would be stupid for him to have a lot of excess weight to haul around, and the fast-twitch muscle of the speedier, smaller players like receivers or defensive backs aren't going to easily bulk up in the same way as those of the players whose positions require strength over speed.
A player like Steve McLendon is presumably extremely muscular, and a quick check with the binoculars at training camp confirmed this. (Not that I knew I would be writing this article then. But it's always good to be thorough in one's data collection, just in case.)
McLendon came into the NFL at a listed weight of 285. Nobody believes for a minute he still weighs that. And in fact a quick look at the Steelers roster confirms that they have finally updated his weight to 320.
But those guys are all muscle, right? Well, I assumed that, at least in the case of the speedster, this would be the case. But I needed some real numbers for the next part of my post, and what I found shocked me.
The fine folks at Pro Football Reference have compiled information about the average weight of NFL players by year and position, between 1970 and 2006. The average height for most positions has fluctuated very little in that time. The average weight has increased in differing degrees by position type, which isn't too surprising. But what shocked me was the across-the-board increase in BMI (Body Mass Index.) The other thing that shocked me is the BMI we're talking about.
As I understand it, generally speaking, the healthiest BMI is between 20 and 22; between 22 and 25 is still acceptable. You are considered "hefty" if you are between 25 and 30, and obese if you are over 30. Since I didn't have the time and energy to crunch all the data, I took data points at 1970, 1990, and 2006, with the idea these would be representative and give a general picture of what's happening. So, by position, (leaving out quarterbacks and kicking team specialists,) the lowest average BMI by position is the DBs, with the WRs very close behind. (And in fact the numbers for WRs and DBs continued to track very closely throughout the years.)
The average BMI for a defensive back in 1970 was 25.1, and for a wide receiver was 25.3. These were (and remain) the leanest players on the team. Running backs and tight ends were around 28, linebackers almost 29, and the Big Eaters (defensive and offensive line players) varied between an average of 30 and 32.
This means that according to the generally accepted criteria the leanest position players on the team, even in the early 70s, would still be considered "hefty," and the big guys were definitely obese.
"But wait," you may say, "the standard BMI doesn't apply to professional athletes, as muscle weighs more than fat," etc. etc. Fortunately, Google came to the rescue with a handy BMI calculator for highly athletic persons. So I ran the numbers, and indeed we now find that the leanest position players came in at a BMI of 21, the RBs/TEs at 23-24, the LBs at 25, and the linemen between 26 and 27.
According to this, even the linemen are just in the "hefty" category. Or this was true in 1970. How about now?
Using only the "highly athletic" calculation, in 1990 the average BMI of the leanest players was 22-23, still excellent; the BMI for the running backs and linebackers was 25-26, into the "hefty" category, and for the linemen was between 28-32, in other words edging into obese, especially for the DTs and offensive guards.
And what about 2006? The DBs and WRs were now at 22, the TEs, RBs and LBs all at 26, and the linemen varied from 31 to 34. The only exception was the DEs, who actually decreased slightly, from 28 to 27.
Why does this matter? Well, if the average height is stable, (and it was remarkably so for most positions) but the average weight is going up, there are major implications for things like the knees. And it doesn't matter as much as you might think whether the weight is muscle or fat.
In this article, an orthopedist specializing in knee and hip replacements explains the problem:

...[t]he force on one's knees between the patella (kneecap) and its articulation with the rest of the knee is about three times your body weight with walking...That is, the force on a 200-pound person's knees while walking is 600 pounds, and when they are climbing, running, squatting, etc. the force approaches 1200-2000 pounds...Obesity also affects spinal mechanics. Truncal obesity with a panniculus (doctor-speak for a big gut) causes an anterior bending force and a compressive force on the spinal column, thus leading to disc pathology and back pain.

In other words, every single excess pound puts about three pounds of extra pressure on your knees when you walk and up to 10 extra pounds when you are doing other, more stressful activities. It's scarcely surprising that so many former football players have serious arthritis and other problems in their joints, even taking injuries out of the equation.
But since the whole point of this article is to look at injuries, let's also think about the role that extra weight plays in increasing the possibility of injury, especially as a player ages and consequently doesn't heal as quickly. It's reasonable to me to suppose that the amount of stress one's joints and ligaments are designed to deal with may be less than the body weight today's players are carrying.
Only time will tell if it makes a difference, but it's interesting that two players who have been oft-injured in recent years, Troy Polamalu and LaMarr Woodley, both came in at significantly lower weights to training camp this year. I don't know what the actual figure in pounds is, but the eye test tells the tale. And, thank heavens, so far they have escaped both training camp and the first two games unscathed.
Since a picture can be really helpful, here are some graphics showing the increases in BMI, including every year between 1970 and 2006. This is using the Pro Football Reference BMI numbers, but since the point is the trend, not the actual figures, it doesn't really matter. (The squiggly lines are the actual numbers, the straight bars the trend line:) 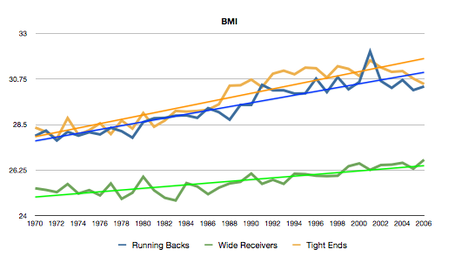 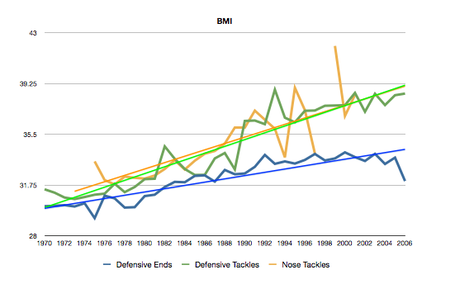 The breaks in the nose tackle graphic are because they didn't have data from every season, as NTs were often calculated in with the DTs. 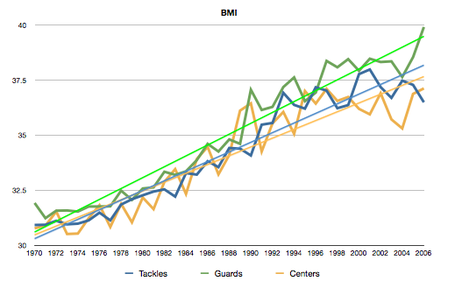 Note that the range represented on the charts varies. In the first it begins at 25 and ends at 32; for the receivers and running backs it begins at 24 and ends at 33. The D-line begins at 28 and ends at 43, mainly because of a one-off spike at the NT position, and the O line starts at 30 and ends at 40. Just to give you a better feel for how these compare, here's one enormous chart with everyone on the same scale. (I took out nose tackles, as the data was based on so few players and was so incomplete:) 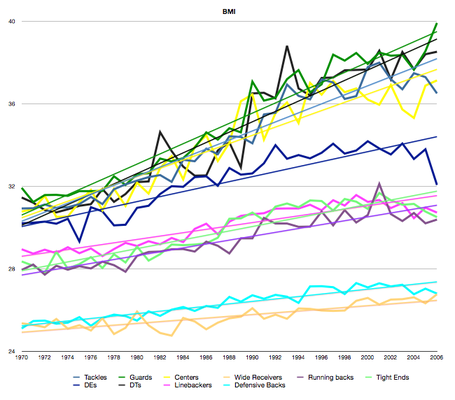 Note that the increase in BMI represents substantial increases in weight, particularly for the linemen, with little difference in height. This can't be good.
An article in the New York Times in 2010 addressed the issue of increasing weight, noting:

Forty-four years ago, when the Packers won Super Bowl I, their largest players weighed 260 pounds. As Green Bay prepares to face Pittsburgh in Super Bowl XLV, 13 players on the Packers’ active roster weigh 300 or more pounds, reflecting a trend over the past several decades in which players have become as supersized as fast-food meals...In 1970, only one N.F.L. player weighed as much as 300 pounds, according to a survey conducted by The Associated Press. That number has expanded like players’ waistlines from three 300-pounders in 1980 to 94 in 1990, 301 in 2000, 394 in 2009 and 532 as training camps began in 2010.

It would be extremely interesting to have the information for the past six years, as the Pro Football Reference tables stop at 2006. I wouldn't be at all surprised to see the downward trend, which begins around the turn of the century for defensive ends and linebackers, has continued, as teams are seeing the value of fast pass-rushers. Nonetheless, as the times article shows, at least the players at the upper end already are getting bigger.
I interviewed a former NFL offensive lineman who played for the Browns in the first half of the decade in the 1970s. (This is for part of what I hope will be a series about life after football.) When he entered the league, the NFL was not a full-time job. He spent his summers working at a job related to his major. He described a game versus the Steelers, early one season, when all of a sudden the linemen were seemingly about twice as big as he and his cohorts. The Steel Curtain had come into being.
It seems the Steelers linemen had worked out all summer. At least some of them were also almost certainly using steroids. As my interviewee described it, this was the beginning of an entirely new era in the NFL. Playing football suddenly become a year-round proposition, and the arms race was on. (I'll leave out any controversial discussion of the steroids issue. They were, of course, not banned in the NFL until 1983.)
This is plenty to chew on, so to speak, for Part I. Part II will be along in a day or two. In the meantime, chime in, and if you know where I can access the data for the past six years so we can look at the continuing trends, let me know.