The release of Ta’amu and Dwyer may be a sign that GM Kevin Colbert has re-defined his strategy, but it remains centered on the “now”.

The reaction was mixed to the news of the release of NT Alameda Ta'amu and RB Jonathan Dwyer.  As BTSC's own Steel34D and Ivan Cole out, the pros and cons of Dwyer's performance after three years of film on this 6th round draft pick was not convincing enough to outweigh the financial leverage the acquisition of Felix Jones brought to the equation.

But the release of Ta'amu resulted primarily in an expensive hit on the value of the Steelers' 2012 draft; Ta'amu cost them two draft picks - the fourth round pick they used on Ta'amu in 2012, and the 6th round pick they traded to move up 10 spots in the fourth round to get him and as a result all they have to show for those two picks is Hebron Fangupo, a 2012 UDFA who couldn't catch on to either the Houston Texans or Seattle Seahawks.

Jones is a proven commodity with five years of film to highlight what he's capable of, albeit one with injury issues, that stabilizes the Steelers' expectations while costing half as much as Dwyer.  One of the biggest knocks on Dwyer was the Steelers never knew what they would get from him year-to-year or game-to-game; over three years Dwyer averaged 4.3 yards per rushing attempt but only 5.9 yards per receiving attempt (and only 19 receptions over two years), and that is all.  Dwyer doesn't return kicks, he doesn't return punts. With Jones the Steelers have a back (as long as he stays healthy) who has averaged 4.8 yards per rush, 8.3 yards per reception and 24 yards per kick return.  While Jones has a higher propensity to fumble (12 time out of 569 carries or one every 47 attempts as compared to Dwyer's one fumble per 90 attempts), Jones has averaged almost twice as many carries per year (113) as Dwyer (60).

The Steelers could wait no longer for Dwyer to define who he is; overweight or svelte; decisive runner or stutter-stepper; a back with vision or a poor decision maker.  LaRod Stephens-Howling is faster, and a better receiver; Isaac Redman is a more powerful runner and a better receiver; Le'Veon Bell is supposed to be a combination of all three, so there was no chance of him being cut.

Ultimately it appears Dwyer's fate was known from the beginning of pre-season, at least by the Front Office.  If he and Redman had been considered tied, one would presume Redman would have been cut since he has only been able to run twice in four pre-season games.  Instead, Dwyer's constant use late in the games despite being a veteran was either planned as giving him every opportunity to prove himself worthy of his contract, or to entice a team to offer the Steelers a trade.  The fact that he was cut at the eleventh hour, and as of this writing (Labor Day afternoon) has yet to be signed by another team seems to indicate Colbert saw little reason to keep Dwyer from a cost/benefit perspective, and the rest of the league appears to share in that assessment. Had Dwyer shown as much attitude and drive on the field as he did in his Tweet after being released ("...This is just the beginning for me my future is bright and I have a chip on my shoulder and they will regret it.") maybe his athletic performance would have won out over his price tag.

Report: Coaches not behind Dwyer's release 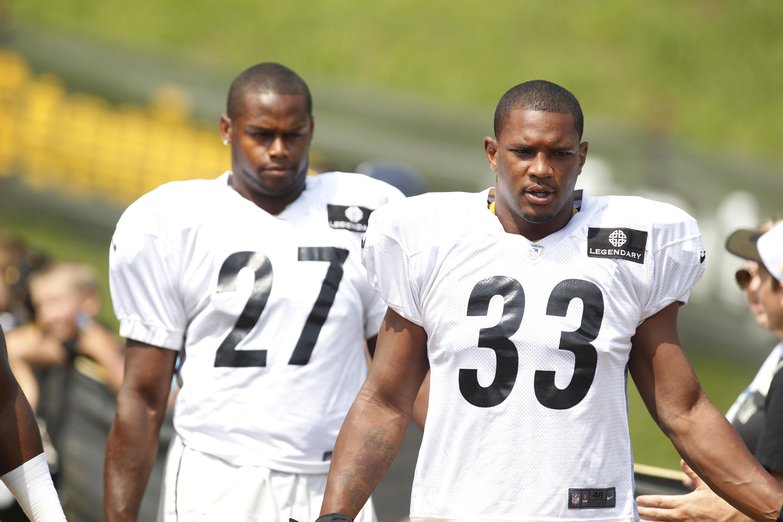 The release of Steelers running back Jonathan Dwyer was not the choice of the coaching staff, Tribune Review reporter Mark Kaboly implied via Twitter Saturday

Which brings us to Alameda Ta'amu.  Initially hailed as the successor to Casey Hampton, instead Ta'amu came to represent a tragicomedy of gigantic proportions. Ta'amu always seemed to have a dark cloud following him around; the DUI incident in college, the absurdity of sustaining a foot injury while walking to Wal-mart as a rookie, and ultimately the near-tragic ending to his drunken vehicular rampage one October night last year.  While some hailed the Steelers selection during the 2012 draft, others pointed out that Ta'am may have fallen to the fourth round in part due to a suspicion he lacked the fortitude to win battles against top flight offensive linemen (David DeCastro and Phillip Blake both manhandled Ta'amu when they played in college).  Maybe this apparent weakness of character was felt to be behind his alcohol related problems and the stress of competing for a roster spot may have triggered signs that concerned the coaches and/or the Front Office.

If Ta'amu and Fangupo were tied in most respects, one would have presumed Fangupo would have been cut since the Steelers have little invested in him and have a history of allowing defensive players two, three or even four years to grasp Coach LeBeau's complex schemes.  But ultimately this was not the case.

So how do these two moves define a possible change in Colbert's strategy?

The release of Dwyer despite the unproven durability of Felix Jones, the lack of substantial participation of Isaac Redman in the 2013 pre-season and the injury to Le'Veon Bell indicates the Steelers may be in a "what will you do for me now" mode.  Likewise Ta'amu's release indicates the Steelers felt Fangupo offered more as an immediate backup option to Steve McLendon than Ta'amu was capable of providing.

For the longest time, the Steelers believed in developing their own talent and sticking with their own veterans. The moves involving Fangupo, Ta'amu, Dwyer and Jones could portend a modification in Kevin Colbert's recent strategy of holding onto a successful core of players; that core is rapidly fading away, but the urgency to "win now" continues.

Jones, who was not resigned by the Cowboys and traded away by the Eagles, was chosen over Dwyer based on a hope he would remain healthy and regain his productivity now. Fangupo was chosen over Ta'amu apparently because the Steelers didn't want to risk the "other shoe dropping" now in terms of Ta'amu's behavior, despite all indications the kid was taking advantage of the second second chance he got.

As mentioned before, the Super Bowl achieving core of the Steelers is fading away, and along with it the strategy Colbert has used for the past several years which was to hang onto players as long as possible.  What remains, aside from the Steelers continuing apparent inability to build a viable and deep offensive line unit (after all Guy Whimper is still on the team), is the fact that franchise quarterback Ben Roethlisberger has more years behind him than he presumably does ahead of him, and the future is fraught with the uncertainty of how much more punishment his body can sustain.

Thus, while Colbert no longer has a corps of players upon which to rely, he still needs to field a winning team now while his Top 7 QB remains such. As a result, draft picks, UDFA and established veterans can take away from this latest roster purge a clear and decisive message: Show us what you can do for us now; prove that what you show in practice and on the field can't easily be found cheaper, now, or be prepared to meet the Turk, now.