...in which Momma looks for flaws in the Steelers' 2014 draft picks, hoping not to find any. Instead she finds the material for a rant...

In Part I Momma looked long and hard at four of the Steelers' draft picks, Ryan Shazier, Dri Archer, Jordan Zumwalt, and Rob Blanchflower. In theory, this article would finish up the drafted players and even throw in a UDFA or two for good measure.

In fact, it turned into a single-player evaluation, and a rant. Sorry about that. As a result, there will be at least a Part III. We can only fervently hope nothing else sets Momma off...

A popular saying around this august site at draft time is "a thousand pounds in the first three rounds." This has never, as you might imagine, been a draft method I have espoused. The readers of Momma's Mocks are no doubt aware of her preference for the skills guys, and while "speed kills," excess weight kills speed, as we saw to our sorrow with some recent players who are no longer Steelers.

And, as I noted in my Round One mock,

[T]here are some fine-looking men in the trenches, but they are seldom of the lean muscled look many of us ladies favor. Casey Hampton, for example, could possibly have been viewed as "cuddly" in his prime, but I'm guessing he was never what you might call a lean muscle-y body type.

So from the BLA standpoint the Big Eaters are definitely at a disadvantage. And of course we have a draftee to consider who is almost a record-holder in this regard.

Daniel McCullers is big. Seriously big. To get an idea of just how big he is, you only have to consider the fact he was playing football, at least in some sense, at nearly 400 pounds. That's wayyyy beyond "cuddly." Here's a pic (although I promise I'm not going to put up a bunch of them, a la Momma's Mocks): 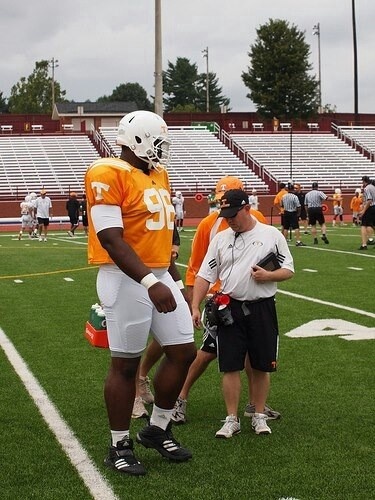 If I was that coach I would be seriously worried about annoying young Mr. McCullers.

McCullers showed up at the combine at a relatively svelte 351 pounds. I'm guessing the trick for the Steelers is going to be keeping him around this number.

I am actually an advocate (in my non-Momma, serious football commentator persona) of weight limits by position because of injury concerns. In a groundbreaking article I never got around to finishing (but will this summer I trust) I examine the injury trajectory with regards to the increasing weight in most of the positions other than the small(er) nippy-guy-type positions, and the picture is not pretty.

Not only does excessive weight decrease agility and speed, it breaks down the joints. I firmly believe LaMarr Woodley would still be a productive member of the Steelers had he kept his weight under better control. Although he may have been pre-disposed, genetically, to hamstring issues, carrying too much weight for his frame can't have helped at all.

And so while I love the idea of McCullers "eating up blockers," I hope he will carefully watch what else he eats.

I had the misfortune to have paid vast sums of money to take my son-in-law to the opening game of the 2011 season—the infamous 35-7 drubbing @ Baltimore which signaled the shift in the balance of power in the AFC North.

Seeing the Steelers D get repeatedly burned by Ray Rice was one of the most agonizing parts of the game. And why were the Ravens able to do this?

An awful lot of it boiled down to Casey Hampton not being quick enough to get out of the way of the chop blocks with which the Baltimore offense was constantly assailing him.

Why did they begin doing this? Obviously I am venturing into the realm of speculation here, but it is a fact the Ravens hired a consultant during the offseason to figure out how the Ravens could consistently beat the Steelers.

I'm guessing the consultant watched tape of the defense, noted that preventing Casey Hampton from eating up two blockers was the key to a successful run game, and said, in effect, "bring the big guy down and everything else will fall into place."

Although there was talk around the league about eliminating chop blocks altogether, nothing has been done about this so far as I know. This makes me mad, as a person who doesn't like injuries, either on the Steelers or on other people's teams.

Some injuries are inevitable. Why not eliminate the sources of the non-inevitable ones? I would think that when your right guard takes out his OWN CENTER with an overly enthusiastic version of a chop block, it should be pretty evident they should be eliminated from the game.

Rant over. To return to the subject at hand, Daniel McCullers is doomed if he isn't nippy enough to avoid the guys hacking at his knees.

But all of this ignores the BLA analysis I am supposed to be bringing to the table. Let's look at some of the analysis from NFL.com:

...carries his weight well with some muscle definition...Very durable and has not missed any games to injury throughout his career.

Just the last sentence is enough to make Momma pretty happy, and she likes the part about muscle definition. I think the Steelers would be well served to emphasize how happy muscle definition makes them.

A big-boned, short-area plugger with some underachiever traits.

Basically, I think the success (or lack thereof) McCullers has on this team is going to come down to his work ethic and determination. As we have seen before, talent is not nearly enough if it isn't accompanied by the will to excel. Hopefully watching another late-round pick, Antonio Brown, who through relentless effort has risen from an afterthought to one of the best receivers in the league will help teach McCullers the value of sheer hard work.

After all, McCullers has the raw material. You can't teach his massive wingspan or any of the other physical attributes which presumably caught the attention of the Steelers. As NFL.com also said:

McCullers has raw tools that could become special if he learns to harness the innate strength in his body and pairs with a DL coach who can refine his mechanics.

They also projected him as a second to third round pick.

In closing, here's what WalterFootball had to say:

Pittsburgh would be a great fit for McCullers. The Steelers need a long-term replacement for Casey Hampton, and McCullers would be a natural zero-technique for them. He could be a good choice if Pittsburgh addresses a different position in Round 1.

Let us sincerely hope Daniel McCullers turns out to be a good fit for Pittsburgh. I would never presume to call him "cute," or even "cuddly." But I think if he can live up to his potential he will look pretty beautiful to all of us!