Today, we break out the big guns.

It's somewhat ironic those big guns mocked a skinny wide receiver to the Steelers with the 15th pick.

Walter Football, one of the more popular sources of Mock Draft Mania, tagged Texas A&M wide receiver Mike Evans as the first Steelers rookie of 2014 in his most recent mock draft.

The Steelers will never pass up the opportunity to grab a great offensive play-maker if one is available to them. This draft class is top-heavy at receiver, so Pittsburgh can go with the best player available, and that would be Mike Evans. The team lost its deep threat this past offseason when the overrated Mike Wallace took the money and ran to Miami. Evans, who has been compared to Vincent Jackson, would assume that role.

If you're like me, you laughed at the idea the Steelers never pass the chance to grab a great offensive playmaker (Jarvis Jones over DeAndre Hopkins and Cordarrelle Patterson last year rings a bell...just sayin'), and hid a muffled laugh over an unexpected re-hash of the "Mike Wallace Is Overrated" argument. 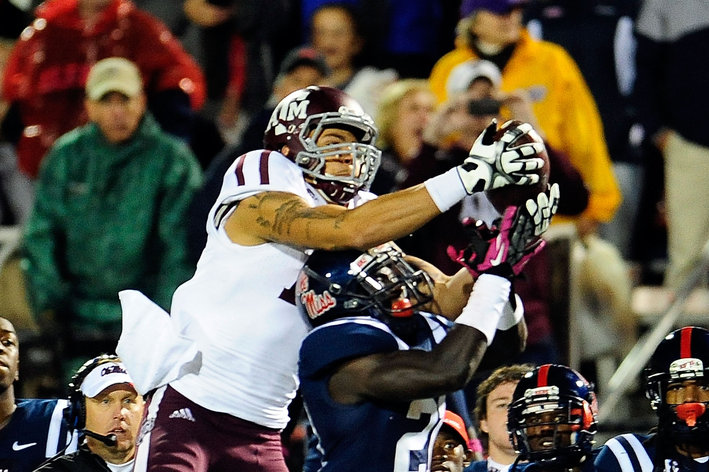 Evans locates the ball very well, but is currently limited as a route runner

Mayhap he is. But what's Evans, then?

Using the same logic as pasted above, the fact the Steelers "lost" their deep threat seems to have helped them more than hurt them. The offense scored more points in 2013 than it did in 2012 or 2011, and the passing game was far more consistent.

Whether this means Mike Evans is truly the best player available is up for some debate, and personal workouts being used to confirm his college tape is an absolute necessity (he won't have the luxury of showing what he has in the Senior Bowl or another All Star game). Still, we're keeping an open mind about Evans, but are leaning more toward Trade-Down-To-The-Mid-20s rather than Take Him At 15.