When you watch someone cook a steak, you want a steak. Watching tight ends having success across the league might make you want to get another tight end.

Watching Broncos tight end Julius Thomas is sort of like watching someone on TV cook a steak.

Practical reasons aside, you usually watch it wanting to get your own steak.

Perhaps the Steelers could find a nice steak in North Carolina TE Eric Ebron. That's who Eat, Drink and Sleep Football is sending to Pittsburgh with the No. 15 pick in their most recent mock draft.

Ebron needs work but is a great prospect 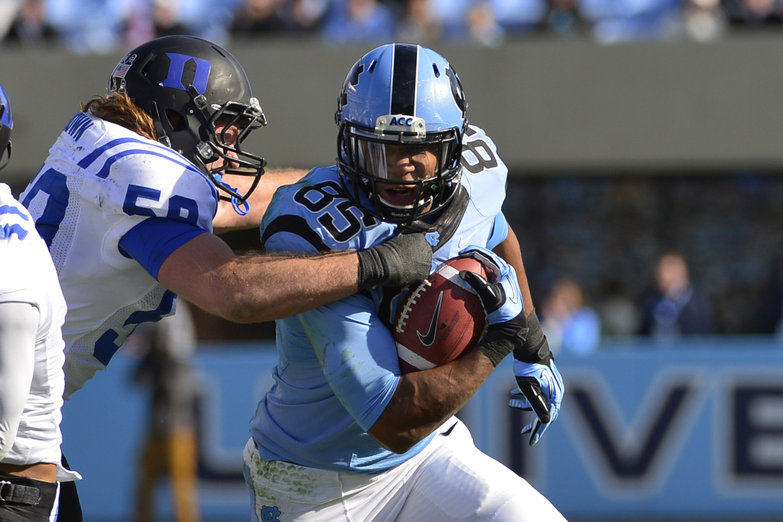 Eric Ebron needs to stick with the weights, but has loads of athleticism

A first team All-ACC selection, Ebron set the conference record for most receiving yards in a season by a tight end this year.

Not exactly the most in-depth analysis we've seen to this point, but maybe that's all we need to know. Ebron is a tight end who can catch the ball. That's a positive thing, and perhaps Ebron's upside - he's still young and still has some growing to do but he has boatloads of athletic ability - is enough to justify the 15th overall pick.

This will no doubt bring back conversations from last year between the pro-and-anti-Tyler Eifert crowds, and fairly so. Many of the same arguments will exist. But the level of dynamic ability of a tight end in the Steelers' offense was proved throughout the second half of the season - when the Steelers actually had a somewhat healthy tight end who wasn't named David Paulson. Sometimes, they even had two healthy tight ends not named Paulson.

Keeping that intact for the future might be a good thing.