For those of you who are new to Momma's Mock Drafts, here is the explanation, from this 2012 article:

'Best Looking Player Available' might not be a metric you see every day, but it was the one I chose when I first tried my hand at a mock draft. I don't watch college football and I wasn't sure I understood all of the arcane criteria the draft pundits used to grade players, so I decided to come up with my own. I was both surprised and pleased to find this report of a study funded by New Scientist. It concluded "The better an American football player is, the more attractive he is."

For the purposes of this mock, I'm assuming the Steelers will stay put at pick No. 15. I am also not going to take a player the Steelers really don't need, at least in the high rounds—for example, I'm not going to look at first or second round quarterbacks, however handsome and appealing they might be. (Well, I might take just a peek…)

And because of the very real possibility of my top pick being gone at No. 15, I am giving two alternatives. Therefore this post will only deal with the first round. Subsequent posts will have a couple of picks each for Rounds Two and Three, giving alternate scenarios depending on the pick in Round One, and so forth. Rounds Four through Seven will be the final post.

Apparently the experts consider this to be a very deep draft, especially for certain positions. This is certainly true from the BLA perspective. And for once, the needs of the Steelers align well with my priorities. It's always a bonus when the team needs fall into line with Momma's preference for skill positions. Of course, there are some fine- looking gentlemen among the Big Eaters, but that requires a LOT more research. Not that Momma minds that either...

So here is my top pick: 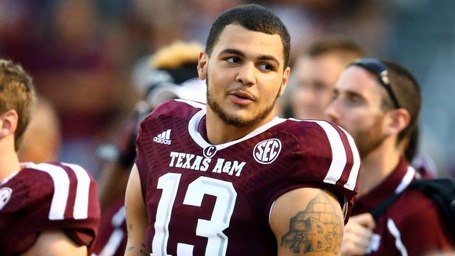 Yes, friends, it is none other than Mike Evans, wide receiver and heartthrob extraordinaire. Evans is ideal in every way for the Steelers - a big, physical target of the sort Ben has pined for since—well, since Plax left.

As WalterFootball.com says, "With his size and leaping ability, he is always open. Evans has good hands and excellent body control." If there is anything Momma loves more than a receiver who is always open, it is one with good hands.

Many believe he won't make it as far as the Steelers at Pick No. 15, but then nobody thought David DeCastro would make it to the Steelers either. Admittedly, this is more likely for a guard than a wideout, but stranger things have happened.

As far as his BLA qualifications, surely I don't need to defend this choice! Men, if you don't see it, show this picture to your significant other and see what she says...

Since it is entirely possible Evans won't be there for the Steelers, I have a couple of alternatives. I have seen all three of these fine young men mocked higher than Pick 15, but on the other hand, so are a lot of other guys, and none of them are top five picks, so it seems likely at least one of the three will be there to gladden the hearts of the ladies of Steeler Nation.

My next choice is, entirely coincidentally, another serious area of need for the Steelers. I give you: 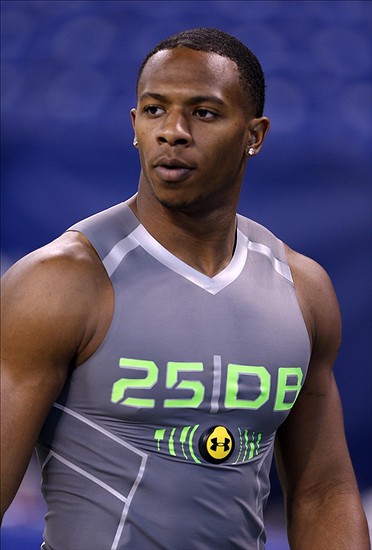 Justin Gilbert projects as possibly the top corner in the draft. He has the advantage of being another position of need for the Steelers. As WalterFootball says, "Gilbert is a great man- cover corner who has size, speed and athleticism."

This is all very well. I prefer this accolade, also from Walterfootball:

"Gilbert was excellent in the field drills. He was fluid in his backpedal and veering across the field. Gilbert had loose hips to flip to turn."

Loose lips may sink ships, but loose hips can help right the vessel of the Steelers' ailing secondary, as well as add to the enjoyment for those of us who are connoisseurs of such things. Seven interceptions are nothing to sneeze at either. If I recall correctly, that was about the season total for the Steelers secondary in 2013.

Or was it? I was going to leave my assertion to stand, but my unfortunate sense of journalistic integrity interfered and I looked it up. As it turns out, last season the Steelers had 10 total interceptions. Two of them were by Lawrence Timmons. So in fact Gilbert had only one less by himself than the entire Steelers secondary combined. I don't expect him to match this output in the NFL right away, even if he were to be a starter from Day One, but any little bit helps...

And finally, in case both those fine gentlemen are unavailable, I have a bit of a surprise pick. As mentioned above, while the Big Eaters aren't generally the first pools into which I cast my net, there are some fine-looking players there, and I've found one to suit the ladies of Steeler Nation:

Aaron Donald may seem a surprising pick. But there are a number of considerations which go into this pick, including the all-important one of BLA. I admit there are counter- indications, and will address the main one first.

After all, the Steelers just spent a first round pick last year on an OLB. They transition-tagged another. Does it really make sense to draft another one this year? I would contend that, given the uncertainties surrounding Jarvis Jones' development, and the further uncertainties about the Steelers' ability to sign Jason Worilds to a long-term contract, Donald makes a lot of sense.

And if Jarvis Jones was "a 15 on a scale of 1-10" (according to Mike Mayock), character-wise, Donald is equally impressive. NFL.com's combine grades note Donald was a "Team captain with terrific personal and football character."

And how about the indications? Here's what WalterFootball said:

Donald was one of the nation's leaders with 11 sacks and led the country in tackles for a loss with 28.5. He also had 59 tackles with 26.5, two passes batted and four forced fumbles. Donald's interior pass-rush ability is in high demand in the NFL.

Fine, fine, we get the idea. How about this more interesting assessment, from nfldraftscout.com: "Donald's skill-set is ideal for one-on-one." That's more like it!

cbssports.com noted "Donald might just be the most under-appreciated NFL prospect in college football."    But one look at his sweet face gave me a great appreciation for his suitability for the Steelers. This, combined with his stellar attributes off-the-field makes him a Momma favorite!

Well, that's it for the first round, folks. Watch this space for the rest of the draft!