in which the wide receiver corps is scrutinized to see whether any of them have gotten any taller since the 2012 season...

This is the continuation of a series examining the various free agents about whom the Steelers have decisions to make. The previous articles can be found by clicking the links: Outside Linebacker; Tight End; Safety.

Steelers.com lists the following three wide receivers as unrestricted free agents: Plaxico Burress (you'd forgotten about him, right?), Jerricho Cotchery, and Emmanuel Sanders. None of those three have gotten taller, although they have all gotten a year older. This is not so much of an issue with Emmanuel Sanders. For Plaxico Burress, though, it obviously is—he will turn 37 just before the 2014 season begins. Jerricho Cotchery, although scarcely an old man, at least by those standards, will turn 32 this June.

While none of these guys have gotten taller, there are a few youngsters waiting in the wings who are already tall, namely Derek Moye and Justin Brown. Moye is 6'5", tall by anyone's standards, and Brown is 6'3", nothing to sneeze at. Of the two, only Moye saw any game snaps, so Justin Brown will not appear in this analysis. This does not, however, close the book on him, and we will get a better idea what he can do at training camp.

Markus Wheaton may not be tall, but I presume the Steelers had high hope for him when they drafted him in the third round last season. While he didn't stick in my memory as someone who made a significant contribution, we'll take a look at this stats, the few he accumulated. I trust he is currently working his tail off, getting ready to wow the assembled faithful in Latrobe with his improvements.

As has been my wont, we will compare the free agents with the other significant players at their position. First I decided to begin with a few of the Pro Football Focus "Signature Stats." One which I always find interesting is the "Drop Rate." After studying the game tape, a determination is made as to whether the receiver should have caught the ball if he didn't. The Drop Rate is the difference between the total catchable targets and the total catches. (I don't believe they give extra credit for balls which by rights shouldn't have been caught but were anyhow, although it seems as if that would be fair.) Here are the numbers: 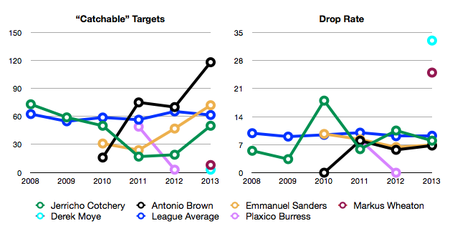 As usual the bright blue line is the league average for the receivers getting the majority of the targets. As you can see it is a remarkably stable figure over the past six years. The "average" receiver gets around 60 "catchable" balls thrown to him, and drops around six of them, or about 10%.

You can see that other than Antonio Brown the receivers we are considering mostly were targeted less than average. (I was interested to note that Antonio Brown would have managed to surpass Hines Ward's record season of 112 catches had he just held on to three of the eight balls he dropped this season, thus saving him the necessity of sulking after the final game.)

You can also see that, for the most part, our wide receivers best the league average drop rate. The exceptions are our two young guys. But to be fair, when you only get a few targets, a single drop has a pretty devastating effect on your drop rate.

Another of the "Signature Stats" is Yards per Pass Route Run. They divide the total yards gained by a receiver by the number of times they ran a route, which they feel gives a better indication of their productivity. Note who is our most productive receiver by far—no surprise there: 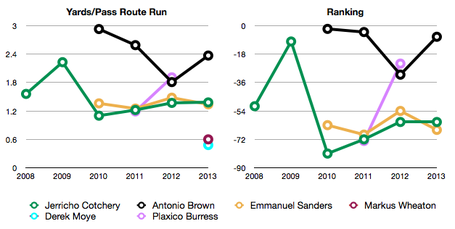 The ranking is, as usual, expressed as a negative number so No. 1 is at the top of the chart. (I suppose I should really change the top to No. 1 and not No. 0 : ) As you can see, other than 2012 Antonio Brown has not only been our most productive receiver by far but also is ranked at the very top of the league. I understand why Ben wants a tall receiver, but I hope he is thanking his lucky stars for the short one he has as well, even if he had to give him a bit of a lesson in team spirit.

Finally, let's look at how PFF felt about the guys overall. The receivers who had very few snaps, such as our rookies this season, don't actually show up in the ranking of the majority of the league, but I've inferred their position in the ranking from their rating: 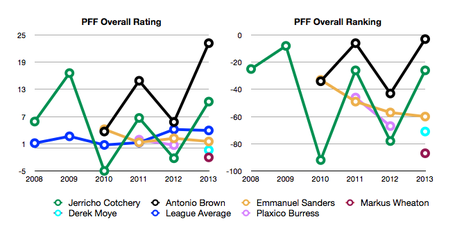 In terms of looking at our free agents, the line which interests me the most is, naturally, that of Emmanuel Sanders. As you can see, his rating has stayed relatively static, dropping slightly, but in the meantime the league average has gone up. As a result, his ranking has dropped steadily. It isn't any one particular thing—he just hasn't grown the way many of us expected him to as a receiver. Percentage-wise, he doesn't drop any more balls than Antonio Brown, so even though there is a perception that he drops a lot of passes, that isn't borne out by the PFF stats. But when you look at his overall "productivity" in the second chart you can clearly see that he hasn't really improved on his rookie year in any significant way, and that is pretty disappointing for someone who seemed to have so much promise coming out of the draft.

It is also interesting to note how many more opportunities he got in his rookie year than the young guys we are looking at. He had 31 catchable targets (and remember, that is less than the number of times he was thrown at, by a good bit—he was actually targeted 48 times.) In comparison, Markus Wheaton was only targeted 12 times all season, with eight of them deemed catchable. Derek Moye was used even less, getting six targets, only three of which were supposedly catchable.

The point of this is to say Emmanuel Sanders was a much bigger part of the Steelers' plans right from the start than either Wheaton (who after all was also drafted in the third round) or Moye. Whatever the reasons, it remains disappointing that Sanders was not able to entirely capitalize upon the promise the Steelers saw in him.

As to whether the Steelers try to bring him back next year, I don't think anybody expects that, least of all Sanders himself.

Plaxico Burress also seems like a long shot. It was a real shame he was injured last summer. He was looking really good in camp. I was actually on the sidelines when he hurt his shoulder, and it was obvious it wasn't good. It's of course possible he'll be back as a camp body, but I have a feeling that experiment is over.

The only real question is of course Jerricho Cotchery. I have a feeling that even if the Steelers do finally draft the tall receiver Ben Roethlisberger has been asking for yea these many years, they will bring Cotchery back. Roethlisberger was quite eloquent when talking to Ron Cook and Andrew Filippone on 93.7 The Fan a couple of weeks ago when he was asked about whether Cotchery would be back. It's obvious he's very comfortable with "J-Co," and Cotchery is the type of extremely high-character veteran the Steelers like to have in the room to mentor the young guys.

I don't really see Antonio Brown being quite ready for that role at this point. Brown's work ethic is second to none, and he appears to be a genuinely good guy, other than the occasional lapse of judgment, but the sort of steady leadership Hines Ward provided for so long doesn't have an equivalent in the room if Cotchery is gone. And it certainly doesn't hurt that he had a career year last season, in terms of touchdowns, anyhow.

That's all for now. The next article or two will deal with the defensive side of the ball, where more difficult decisions lie.