The NFL and the lawyers representing over 5,000 players (and family members) who sued the NFL for allegedly hiding the risks and effects of concussions from the players have reached agreement on how the $765 million settlement will be structured.

The two sides filed the settlement in Federal court last Monday, January 6. U.S. District Judge Anita Brody who is presiding over the case still needs to review and approve the settlement, but if she does so, the next step would be the formal court notification to the plaintiffs who would then have a number of months in which to make a crucial decision. The retired players could either decide to accept the settlement or, on an individual basis, decide to opt out of the agreement entirely; if a sufficient number of plaintiffs elect to opt out of the agreement, the judge could force the two sides back to the table, or the case could continue down the path toward a trial.

The NFL would also pay $112 million to the players' lawyers, and spend up to $4 million to reach out to the retirees to explain the terms of the settlement, bringing the total payout to nearly $900 million.

If approved by Judge Brody, this settlement agreement will require the NFL to pay within a month from aproval a total of $187.5 million into a monetary awards fund, $10 million into an education fund and provide $35 million worth of medical testing to retired players.

The NFL would be required to pay into the monetary awards fund one-half of the $765 million within three years of the settlement, with the balance to be paid out over the following 17 years. If at any time the balance of the awards fund fell below $50 million, the NFL would be required to accelerate its schedule of payments to restore the balance to that minimum level; if the $765 million fund is exhausted before it expires, the NFL is required to pay an additional $37.5 million, but no more. Players will receive any monetary award they are entitled to in a lump sum.

The awards fund is expected to remain active for 65 years, based on a mutually agreed upon actuarial calculation that by that time no former player covered by the agreement would still be alive.

A decision to accept the agreement by an individual (or a failure to make a decision; not voting either way would constitute a vote in favor of the settlement) would mean they would thereafter receive a monetary settlement predicated on the number of years they played in the NFL as well as their current medical condition.

A decision to opt out of the agreement would preclude that individual from receiving any benefit of the settlement; the only two recourses for a retiree making such a decision would be to try to gather enough other dis-satisfied players to form a large enough dissenting coalition to force the two sides back to the bargaining table, or to pursue their claims against the NFL individually. Any attempt to file new lawsuits against the NFL would face the daunting task of directly battling the NFL's contention that the collective bargaining agreements that have been signed with the players union for the past 45 years cover work-place related injuries.

Settlement of a lawsuit is a compromise between the two parties, and as is typical with compromises neither side may fully get what it wants, or thinks it wants.

For the NFL and its owners, parting ways with almost a billion dollars out of its bottom line runs counter to the persona it exhibits every day in every move it makes; that of "no dollar of profit is too small to covet". On the other hand though, being the deep-pocketed face of corporate greed with hands stained by evidence of denial facing the judgment of a jury that may feel its own pangs of culpability would expose the NFL to the risk of far greater monetary damages than it has agreed to pay.

"League of Denial" blames the NFL for concussions and broken lives, but we're all guilty 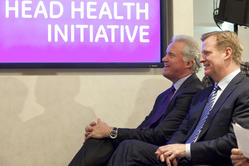 For the current and retired players, success at a jury trial would require them to prove that the physical, mental and emotional traumas they have suffered, or are at higher risk of suffering in the future, came from the blows they received as NFL players and not as college, high school or Pop Warner players; an argument that in their making runs the risk of providing evidence mitigating the NFL's culpability. On the other hand, unless their motives for bringing this suit are based more on revenge, the monetary compensation to them and their families and the access to free medical coverage provided for by this settlement addresses the very conditions suffered by those whose lives have been negatively impacted or destroyed as a result of the nature of the sport itself.

The specifics of the settlement, if approved as submitted, are as follows:

Current and future players are excluded from the settlement.

All affirming retirees will be eligible to take part in a baseline assessment program which will be used to determine whether currently they are eligible for monetary compensation, or will be used to establish eligibility anytime in future for as long as the retiree lives.

Retirees younger than 45 with Alzheimer's who played for who played for five or more seasons would be eligible for $3.5 million; age 50 to 54 up to $1.6 million. Retirees with Lou Gehrig's disease, Parkinson's or other such diseases could get upwards of $5 million; retired players diagnosed with dementia would be eligible for compensation based on the degree of dementia, from $1.5 million up to $3 million (hence the baseline testing). Retirees with milder forms of dementia may not get payouts but would receive the medical benefits.