Share All sharing options for: Team World vs. Team USA in American Football

You knew this was coming immediately after Warroad, Minn., native T.J. Oshie buried the game-winner to down the Russians.

I do not follow hockey. It's a great game, one of which I have the utmost respect. I did not play hockey as a wee lad, and that may be the compelling reason; I don't really know enough about it. But I asked myself a thousand times during the hockey tournament at the Vancouver Olympics why I don't. After watching the U.S. take down Russia, I'm asking myself the same thing.

An off-shoot conclusion I always come to is how unfortunate it is for die-hard NFL fans there is no international version. For all the money the NFL makes (enough to pay its commissioner a laughable sum), it will never touch the international flavor of the NHL or MLB - at best with two decades of intense marketing it might be on the level of the NBA.

But unlike its three North American competitors, it will basically never have that spotlight international tournament.

Let's just say it did, though. Where would the rest of the world be?

Jimmy Kempski of Philly.com posed this question, and compiled a roster of players born in other countries. Let's just pretend that all of them would want to participate in such a game - and that the game would be considered valid even if Tim Tebow is playing both ways. 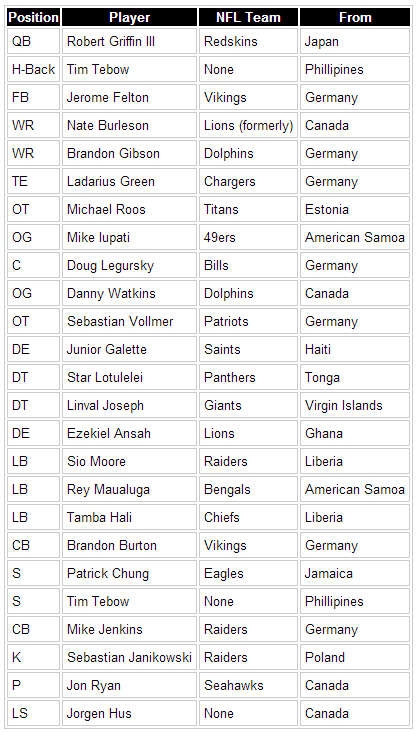 To our knowledge, every player on this list is an American citizen - up to and including former Steelers center/guard Doug Legursky. Judging by the fact the vast majority, if not all, were educated in the U.S. and have resided in its confines for a long time, many, like Tebow, were only born in another country. They are not from there.

Could you imagine what would happen if it turned out Tebow isn't an American citizen?

This article really means nothing about anything, and since I'm not nearly as clever or funny as Kempski is, I'll halt any further elaboration - except to say my first thought was "he better put Christian Okoye on here" - which he did. Kind of.

If there were any notable foreign citizens left off this list, leave a comment or drop me an email, we'll get it updated.