The second pick is in for our 2014 community mock draft, with BTSC contributor Jack Finn running the Rams front office as they continue to manage the return package they got from Washington for RGIII.

If this mock draft allowed for trades it would be all but a certainty that I would deal the #2 overall selection away for a large bounty of draft picks, and I suspect that's what Rams GM Les Snead intends to do as well. But alas, there are no trades in this scenario and I shall have to wave goodbye to my imaginary bounty.

So under these circumstances, St. Louis decides to do what I'm sure will be one of the more controversial and talked about moves in the draft...

There are two steps in the thought process of this selection - the first of which is the current Rams quarterback, and first pick overall in 2010, Sam Bradford.

Bradford appeared to have a bright career ahead of him winning the 2010 offensive rookie of the year award; however, he has never taken that "next step" for the Rams. By no means has it been all his fault - there are a myriad of reasons and I won't go into detail on all of them here - but Bradford has never lived up to his number one overall selection and he hasn't ever shown he can be the Rams "franchise quarterback".

Again, this is not all [Bradford's] fault, but he hasn't done much to elevate the team either.-Jack Finn

Aside from the fact he is recovering from a torn ACL (which I would be shocked if it did not affect him in 2015), I might be content to sit tight with Bradford at QB and hope he makes "the leap". After all, he did come out the gate looking good in 2013. I would be content that is, if Bradford's cap hit for the 2015 and 2016 was not in the astronomical region of $17 million.

This is the NFL in the post-CBA era: you cannot pay your quarterback that huge sum of money to merely be adequate, because that's a recipe for failure. Compare the Rams' situation to their two NFC West power house neighbours - both Seattle and San Francisco are paying peanuts to their young QBs, both of whom are good enough to win without actually carrying the load by themselves, while the team spends their money on a very talented supporting cast. In contrast, St. Louis is paying a guy who is maybe, maybe just good enough to win but similarly cannot do it by himself, while he's surrounded with what has been at best a mediocre supporting cast.

Cutting Bradford now saves $27 million total between 2014 and 2015. That's a ridiculous sum of money. That's at the very least a lucrative extension for stud defensive end Robert Quinn (when the time comes) and a couple of shiny free agents in 2015. Plus, it means the Rams wouldn't have to entertain cutting productive but expensive players to create salary space (Jake Long, for example).

By selecting a quarterback, the Rams will place a guy under center who for the next four seasons will be earning around $5 million per year (with a possible 5th year option). That net savings (plus not having to tether themselves to however much an extension for Bradford would cost), is very compelling. By selecting the right quarterback, the Rams can follow in the trail set by their NFC West brethren and field a great roster all-around, and not just try to rely on a quarterback who needs to be great for them to win.

The rationale behind selecting a quarterback is just step one. Now the Rams need to decide who to pick. Blake Bortles is off the board (though he wouldn't have been my choice anyway) and #13 might be too late to wait for a signal-caller. I think Johnny Manziel is the guy. 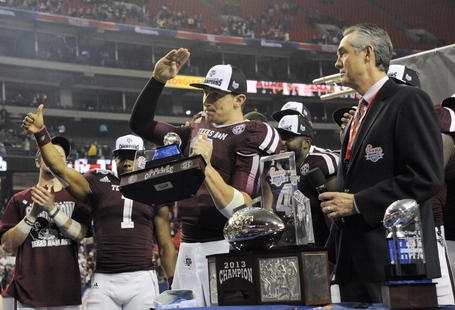 In his time as an Aggie, Manziel did nothing but win games. He was the first freshman ever to win the Heisman, in large part thanks to his ability as a dual-threat quarterback. However in his last season in college, Manziel showed marked development as a pocket passer, whilst retaining all those exhilarating qualities that made him "Johnny Football".

There is no denying Manziel has that incredibly special "it" quality - some of the things he does are truly special, and you can't coach or teach it. This is a perfect example:

It's an ability that drives defensive coordinators crazy - being able to extend the play, get outside the pocket, and then still deliver. It's essentially indefensible because you can't truly game plan against it.

Add that to his threat as a runner, his development in the pocket, and his more than adequate arm strength and I believe Manziel will flourish in the NFL.

He's lived his college football career under unbelievable scrutiny; some cracks are going to show.-Jack Finn

At this point, the only question left for some is Manziel's maturity, and whether that will be a problem in the NFL. Since declaring for the draft, Manziel hasn't done anything that suggests to me he isn't ready for the NFL. Yes, he is certainly a character and there's no denying that. But since when was that a crime? He's lived his college football career under unbelievable scrutiny; some cracks are going to show.

But even if you believe that he has issues, can you think of anywhere better for him to be than under the wing of Jeff Fisher, a man famous for fixing those "bad character" guys, and the relatively small media market of St. Louis?

So, in summation, the Rams get a special quarterback with the talent and that "special something" who will lead their offense for years to come, whilst saving a heap of valuable cap space and jettisoning a former first round pick who just couldn't get it done.

It's a controversial pick, I know, but I believe it's the right one.