Our 2014 community mock draft moves onward, with BTSC reader twault making the third pick for the second year in a row.

The Jacksonville Jaguars are an intriguing team, to say the least. They are not a team that is known for drafting well in the first round - more known for "misses" than "hits."

2003 - QB Byron Leftwich - Would go on to be a brittle, oft-injured backup for the Pittsburgh Steelers in just a few short years.

2005 - WR Matt Jones - Quite a "shocker," Jones was a college quarterback, and the pick was based more on his potential than his actual ability as a wide receiver. He would be released by the Jags after 4 years, due to repeated substance abuse issues.

2009 - OT Eugene Monroe - Actually a good pick. However, he was traded to the Ravens last season for Baltimore's 4th and 5th round picks.

2010 - DL Tyson Alualu - Another head-scratching move. Most draft pundits didn't have Alualu going in the first round, let alone 10th overall. Alualu never had more than 4 sacks in a season and finds himself projected as a backup right now.

2012 - WR Justin Blackmon - Seemed like a "can't-miss" pick. However, Blackmon has been in trouble for violating the NFL substance abuse policy and is currently suspended indefinitely. He is currently eligible to apply for reinstatement, but his status for 2014 is still in question.

2013 - OT Luke Joeckel - Many predicted Joeckel to be the top overall pick, and the Jaguars landed him at No. 2. After Jacksonville traded Monroe to the Ravens early in the season, Joeckel seemed poised to prove himself as their left tackle of the future. As fate would have it, Joeckel would get hurt in the next game immediately after the Monroe trade, and wind up on injured reserve.

As awful as the Jacksonville offense was in 2013, their defense was also pretty terrible. Their defensive line could not generate much of a pass rush and they were tied for last in the league in sacks. Head coach Gus Bradley made a few moves during the offseason to shore up the pretty awful unit: re-signing their sack leader Jason Babin, and bringing in free agents Red Bryant and Chris Clemons (both from the Seahawks), as well as our old friend Ziggy Hood. With these signings, Bradley may not have to draft a defensive lineman early this year.

Additionally, the Jaguars acquired offensive guard Zane Beadles from the Denver Broncos, and running back Toby Gerhart was signed to replace their former standout Maurice Jones-Drew.

Quarterback - Chad Henne is not a franchise quarterback. He could be better if he had some weapons, but he will never be great. Do the Jags risk taking a QB in the first round and forget about getting other weapons, or do they risk NOT taking a QB now and regretting it for years to come?

Wide receiver - Without Justin Blackmon, the Jaguars will go into the 2014 season with Cecil Shorts and Ace Sanders as the starters. They may have 12 wideouts on the roster, including QB-turned-WR Dennard Robinson, but they clearly need some help.

Running back - MJD is gone, Toby Gerhart should be "the guy" for the money they're paying him, and then they also have Justin Forsett and Jordan Todman in the mix. These guys aren't known for being world-beaters.

Offensive line - Luke Joeckel and Zane Beadles are the big names (and Joeckel is expected to recover fully from his injury). Brad Meester, the team's starting center, retired after a 14 year career, so interior linemen and right tackle would be needs.

Defensive back - The Jaguars were one of the worst teams in terms of defending the pass and their secondary could definitely use an upgrade. Plus, since this is a "passing league," it's never a bad thing to have several quality cornerbacks.

It would be tough for anyone to pass on Clowney in this draft, but due to Bradley's offseason acquisitions, it could happen even if Clowney were available at the 3rd pick. The Jaguars have several big needs, and I don't feel the defensive line is a big need anymore. Plus, they wouldn't be addressing any of their other holes if they spent a decent chunk of change on three free agents AND drafted a 1st rounder for the same unit.

It would be tough for anyone to pass on Clowney in this draft, but due to Bradley's offseason acquisitions, it could happen even if Clowney were available at the 3rd pick.-twault

I also don't feel that there is a running back or defensive back worthy of being a top-5 pick in this year's draft, so this came down to QB, WR, or OL.

With two great offensive tackle options in Jake Matthews and Greg Robinson, the Jags couldn't go wrong... except they would. Last year, they made Joeckel their left tackle of the future. Sure, they could pair Matthews or Robinson with him and have two great bookends, but their biggest need is in the interior part of the line (and it is way too soon to pick an interior lineman at #3). Not to mention, the Jags were the worst offense in the league, and a tackle isn't going to put points on the board.

At receiver, Sammy Watkins could be a slam dunk. He could either be the speedy complement to Cecil Shorts, or push Shorts to the WR3 spot (pending Blackmon's reinstatement), and form a formidable trio like "Young Money." However, with Chad Henne throwing the football... don't count on it. 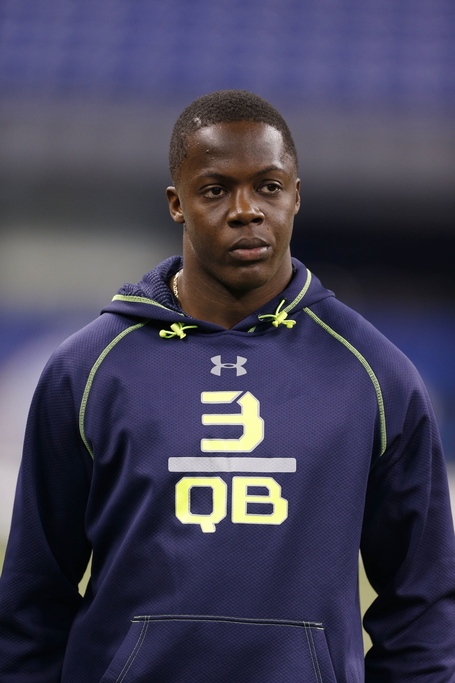 The only option at this point is to select the quarterback that many scouts feel is the most NFL-ready in Teddy Bridgewater. The Jaguars need a quarterback, and Bridgewater seems like a safe pick... for a first round quarterback. Sure, there is a chance that any of the top 3 QBs will be busts, but while Bridgewater may not be the most athletically gifted, he clearly is the smartest of the top QB prospects in terms of football IQ.

Bridgewater is able to make reads, go through his progressions quickly, and he typically knows when/where a blitz is coming from. He is able to move the chains and put points on the scoreboard. Points are what the Jaguars need, and Bridgewater should be able to provide a lot more scoring opportunities than Chad Henne, especially if the Jaguars can get him some weapons in later rounds.