The Rams second pick is in for our community mock draft (after taking a new quarterback second overall). This time we've got BTSC reader Panther pride 76 running the show.

The St. Louis Rams have done an excellent job rebuilding a team that was considered one of the worst teams in the NFL just a few short years ago. The catalyst for this turn-around has been GM Les Snead, hired after they finished the 2011 season with a 2-14 record. Snead identified the first thing his team needed to navigate through the difficult transition period - a strong head coach in Jeff Fisher. His next move was to fleece the Washington Redskins out of three 1st round picks and a 2nd rounder in 2012 for the right to draft Robert Griffin III. This has helped the Rams add a number of starters who should be stars for years to come. They have taken strides over the last few years and are on the cusp of playoff contention.

Snead knows he needs to make a few more strong moves to bring his team to the next level, and there are needs that need to be addressed:

1) Offensive tackle: Major problems at both tackle spots - Jake Long tore his ACL and MCL in December, and Rodger Saffold was eventually re-signed after a fiasco with the Raiders, but likely still isn't the long-term answer.

2) Safety: Rodney McLeod was one of the worst starting safeties in the NFL this past season. T.J. McDonald wasn't good either, but he at least was just a rookie 3rd rounder, so he still has some room to grow.

3) Guard: Chris Williams is a free agent, but the Rams need to upgrade from him anyways. Harvey Dahl was also cut.

4) Wide receiver: St. Louis traded up in the 1st round last year for Tavon Austin, but they still need playmakers and depth that can contribute (even after signing Kenny Britt to a one-year contract).

5) Linebacker: James Laurinaitis struggled a bit this past season, but the greatest liability in the Rams' linebacking corps is Jo-Lonn Dunbar at the strong side position.

6) Cornerback: Cortland Finnegan was one of the most disappointing players in the NFL in 2013 and was cut (and since signed by the Dolphins). 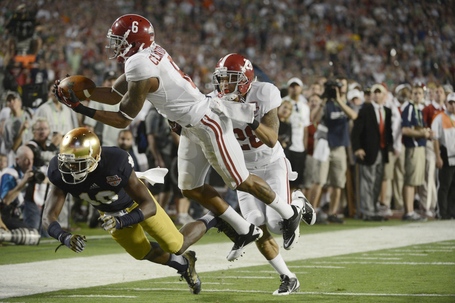 Clinton-Dix is a great athlete that will drastically improve the porous Rams secondary, having been well-coached in a pro-style defense at Alabama. Nice size and body length, quick to read and react, "Ha Ha" has speed and flexibility to match up with slot receivers or tight ends and good hands for interceptions.

He's an effective run stopper as well - drops downhill with conviction and does not shy away from contact, runs the alley and wipes out ball carriers. Can break down and tackle in space and has special teams experience.

This pick would show dividends very early in the 2014 season. The Rams already have a very good front seven (excepting Dunbar), headlined by studs Chris Long, Robert Quinn, and Michael Brockers. The addition of a play-making safety that can also support the run can help take this defense to another level.