BTSC contributor Michael Uhlhorn is here with the Bears pick, and makes no bones about being influenced by some recent discussion on the site about a particularly intriguing prospect.

The Chicago Bears have a defensive legacy rivaled only by our own Pittsburgh Steelers.

I considered a number of defenders for this position - and briefly Odell Beckham Jr. because even Jay Cutler can't suck with a receiving corps like that. But eventually, it was not a Bears fan or my own in-depth research that brought me to this pick, but our own dear leader, Neal Coolong.

By making such a convincing argument for this player's value in Pittsburgh, he unknowingly convinced me to take him off the board one pick before the Steelers in this community mock. 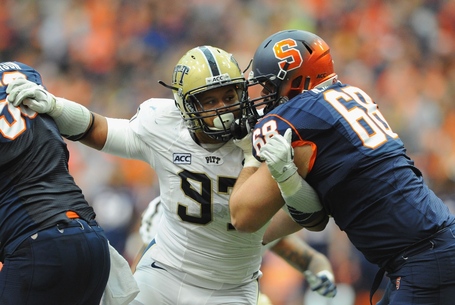 Donald is rising up the boards and fits in Chicago for the same reasons he could fit in Pittsburgh - he provides versatility and is nearly unblockable. Pair Donald's ability inside with Jared Allen and Lamarr Houston off the edges and the Bears have a defensive line that could rival the best in the NFL.

Safety could make sense here, but do the Bears feel Calvin Pryor is worth the 14th pick? Corner could be taken here with Dennard coming in to be a future starter, even though Chicago brought back Tim Jennings and Charles Tillman.

In my opinion, the Bears will follow the same logic that Neal had when he selected Donald for the Steelers in SB Nation's blogger mock draft - NFL games are still won in the trenches. The Seahawks and Panthers have shown the value of this old adage. And in 2014, Chicago will join them among the elite defensive fronts in the league by selecting someone who could turn out to be the best defensive lineman in this draft.

Notes for the imminent Steelers pick:

Voting will begin tomorrow and extend into Sunday, with the write up posting on Monday. It'll be done by a poll, and while I do intend to include a wide variety of options, do let me know in the comments who you'd like me to make sure to include.