The Pittsburgh Steelers have answered their 6 Free Agent Departures with 7 Free Agent Signings -- with more to come, have left the faithful asking if we're seeing a sea change in philosophy from a franchise known for stability. As usual, the devil is in the details....

Share All sharing options for: Decoding the Ying & Yang of the Steelers free agency and draft plans

The phenomenon that is NFL Free Agency sure did take Steelers Nation on a rollercoaster ride, didn’t it?

Aren’t the Steelers supposed to be about stability? Can anyone dispute that the Steelers roster has been anything but stable of late? As ESPN’s Scott Brown observed, those expecting panic out of Pittsburgh’s brain trust will wait in vain.

And the reason for that can be found in the curious concept known as institutional memory.

All This Has Happened Before and Will Again

Institutional memory defies precise definition. You certainly can’t measure it with a number. But it exists. Pittsburgh, with 3 coaches since 1969, has more of it than say, Cleveland, with its 3 coaches since 2012.

Institutional memory fueled the Steelers decisions to cut ties with the Aaron Smiths, Hines Wards, and James Farriors when they did – in the early 80’s Pittsburgh learned the hard way that holding on to aged stars too long carries a stiff price.

The roster turnover of the last two off seasons is undisputedly uncharacteristic of anything the fan base has witnessed since Heinz Field opened. But a longer memory and deeper perspective reveals that recent experience isn´t so different.

And we’re not taking about back ups departing, we’re talking about losing starters.

How the franchise handled those losses, and how the national media and fan base reacted to them are interesting, and perhaps instructive, in understanding meaning of what is happening today.

Priming the Pump in Pittsburgh – Free Agency Arrives in 1993

Consider the inaugural free agent period that came in the spring of 1993 in the wake of the Freeman McNeil verdict. In reviewing the NFL’s first ever experience with large-scale roster turmoil, Peter King broke down the results into 8 categories:

Guess which group the Steelers feel into?

King put Pittsburgh into the "They Got Hurt" bunch. A quick look at the Black and Gold’s balance sheet reveals why: 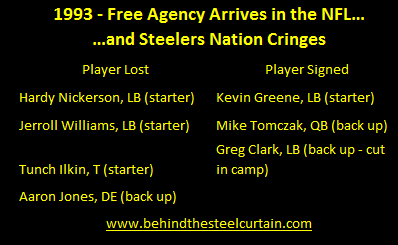 In fairness to King, things felt worse than they looked. In addition to the roster movement, the Steelers had been forced to match Tampa’s restricted free agent offer for Neil O’Donnell.

Hardy Nickerson had been a budding into Super Stardom and supposedly had ignored a handshake agreement with Bill Cowher to give the Steelers a shot at matching any offer he received. Ilkin had been a team captain and pillar of the franchise for 10 years. Even if management hadn’t planned on bringing him back, it hurt to see him depart to Green Bay for a 2.2 million dollar contract, huge money at the time.

As BTSC observed last year, Jerroll Williams, was another home-grown star who thrived with Bill Cowher´s arrival and who was the subject of a suspicious, Emmanuel Sanders like 1 year restricted free agent offer. Aaron Jones was only ho-hum loss, Jones, a defensive end and former number 1 pick, was the Ziggy Hood of his day (actually, Hood was better.)

In 1992 the phenomena of Cowher Power shocked the NFL as the Steelers surged to an 11-5 record and the first seed in the AFC playoffs. In contrast the 1993 Pittsburgh Steelers finished 9-7 and only made the playoffs on the force of Greg Lloyd’s will.

But injuries, overconfidence, poor specials teams and "locker room lawyering" powered the drop off.  In fact, ’93 was the last time the Steelers negotiated contracts during the season. Management felt that that caused such a distraction that Steelers have had a regular season contract negotiation black out since.

Before the season, Peter King wrote "Pittsburgh lost two of its best noses for the ball on defense, Nickerson and Williams…. Pittsburgh hopes that former Ram linebacker Kevin Greene can give the team a couple of good pass-rushing years."

Jerroll Williams was a complete washout in San Diego. Meanwhile, Kevin Greene made 12.5 sacks in 1993 alone. And while Hardy Nickerson had a fine career in Tampa, Green Bay, and Jacksonville , the 1993 Steelers inside linebacker tandem of Levon Kirkland and Jerry Olsavask/Chad Brown was better than the 1992 due of Nickerson and David Little. Overall, the Steelers defense improved to from 8th in yards allowed to 3rd. As for Ilikin, he injured his ham string in late August, was cut and resigned during the regular season, suiting up for 1 game.

1993 Was Just the Beginning

Again, the national and local media sounded the alarm. Fans panicked. (I still remember the day that a fellow fan saw my Steelers shirt in the weight room telling me that the Steelers had lost Donald Evans and complained about management’s "Dismantling program.")

The 1994 Steelers improved greatly from the 1993 edition, finishing in a heart breaking 3 yards shy of the AFC Championship.

…After which the Steelers saw their starting quarterback, starting right tackle, starting guard and starting outside linebacker depart or retire via free agency. The disaster forecasts flourished. Again.

The 1996 Steelers again won the division and a lackluster performance in Fog Bowl II was all that kept them from another AFC Championship game appearance.

However, the 1997 Steelers team did make it to the AFC Championship, even after it weathered the losses of its three top cornerbacks (including Hall of Famer Rod Woodson), a starting wide out, and an all pro linebacker (Chad Brown) who represented a Keenan Lewis like loss.

Arriving at the "What does Steelers history tell us" part of this little trip down memory lane would be incomplete and very disingenuous if it failed to mention that in 1998 the Steelers lost their stand out starting wide out (Yancey Thigpen), left tackle (John Jackson), starting safety (Myron Bell), and a number of key back ups (Oliver Gibson) and imploded to a 7-9 finish.

As observed in BTSC’s "Steelers vs. the Narrative" retrospective, the 1998 collapse finally gave both the national and local press a chance to say "I told you so," and spin their "Free Agency Destroys the Steelers" yarns.

But that’s not the moral of the story.

Since 1969 team building tool of choice in Pittsburgh has been, is and will remain the NFL Draft. Free agency is sort of a Shadow Land as such for what is and isn’t happening with the draft.

Sure, the Steelers dipped into the free agent well to sign starting guards in ’94 (Kalis), ’95 (Newberry), and in ’96 (Wil Wolford), just as free agent safety Michael Mitchell is the latest in a long line players at that position brought in by Kevin Colbert.

In the 1990’s the Steelers were stuck in a piss poor bad stadium deal at Three Rivers. Absent those revenues Dan Rooney, Tom Donahoe, and Bill Cowher knew that the Steelers would need to endure annual free agency stress tests and their drafting strategy reflected that. When a starter left, Pittsburgh (generally) had someone ready to take his place. Out goes Tunch Ilikn, in comes Leon Searcy. Away goes Eric Green, in comes Mark Bruner. Kevin Green departs, Jason Gildon takes his place.

Exhibit A would be the offensive line of the late 90’s Jamain Stephens, Paul Wiggins, and Chris Conrad provide the perfect example. They were three premium offensive line picks from 1996, 1997, and 1998 that were abject busts. Run blocking got so bad less-well informed members of the punditry began to suggest Jerome Bettis was losing a step.

Thanks to Heinz Field, the Steelers have had the necessary revenues to keep more of the guys they’ve wanted to keep so guarding against impending free agent losses has played less of a role in Colbert’s drafting strategy.

Indeed, Colbert’s free agent moves, especially of late, have more often been about what hasn’t happened in the draft. Look no further than the Steelers last deep dip into the free agent pool, which can in the 2010 "Get the Band Back to Together Signing Spree." 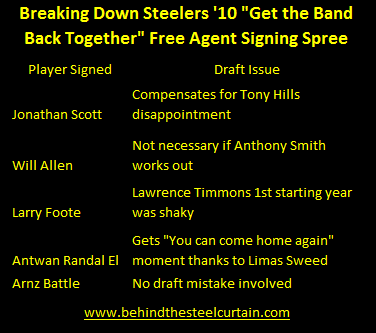 There’s almost a 1 for 1 relationship between the Steelers free agent moves and draft day or concerns about potential draft day mistakes.

So what does this tell us about Steelers Nation has just witnessed? Well, a number of things.

1. Steelers continue to trust in the draft, yet hedge their bets.

Really, this is most important concept at work in all of the Steelers free agent moves, and its meaning is two fold.

We know the Steelers anticipated losing Emmanuel Sanders because they almost let him go a year go, which show that there was a market to for Sanders and a limit to who much the Steelers would pay to keep his services. Ergo, you get the pick of Markus Wheaton in the third round of the draft.

But the Steelers are far from "All in" on Wheaton. While Johnny Mitchell is the only coach that remains from the 90’s, it seems that someone on the South Side remembers the Steelers failed attempt at a one-for-one Will Blackwell for Yancey Thigpen replacement. And that explains Heyward-Bey’s signing.

The Steelers hedge moves also reveal in a more realistic appreciation of what immediate help the draft will deliver.  Think back to the days after the 2012 draft. People were already penciling in David DeCastro and Mike Adams as starters. Many were quick to anoint Alameda Ta’Amu as Casey Hampton’s heir. By training camp Sean Spence looked like a steal who’d push Larry Foote for time.

And the decision to bring Brice McCain to camp tells me that management is also realistic about the likelihood of counting on rookie contributions.

2. Salary Cap Discipline is Back in Vogue

It’s no secret that the Steelers have been in Salary Cap purgatory since the 2011 lockout. Debates over they overspent to keep the core of a team that went to 3 Super Bowls in 6 years is irrelevant at this point as things are changing. The Steelers wanted and expected both Jerricho Cotchery and Al Woods back.

And there you get Cam Thomas and Lance Moore, who at least on paper offer more bang for the Steelers salary cap buck, and bringing those two in instead of upping the ante for Woods and Cotch, opens the door to the bargain hunting that brought  in McCain and Heyward-Bey.

If Alameda Ta’Mau turns out to be even remotely serviceable, BabyZilla likely never makes it to the South Side. If the Steelers had any faith in Chris Cater, Arthur Moats is likely to continue waiting for the phone to ring. And if the Chris Rainey gamble doesn’t fail miserably, Blount likely signs elsewhere.

Make no mistake about it, this has been the most-active the Steelers have ever been in free agency, and further moves are to come after June 1st on the defensive line if no where else (unless management thinks Brian Arnfelt is a stud in waiting.)

But at the end of the day for all of the movement, the amount of guaranteed money put in play by Pittsburgh is very small, proving that there has been no seismic shift in franchise philosophy, but rather a recalibration of the draft-free agency ying-yang that governs NFL personnel policy.