The second half of our community mock begins with our delightful division rivals, represented by BTSC reader Steelers_Fan_to_the_Core.

Well, it's time for our hated division rivals, the Baltimore Ravens to make their choice in our BTSC community mock draft. The way things have gone so far must have them elated with the top-notch talent available at this spot.

After a disappointing season following their unlikely Super Bowl run, the Ravens find themselves looking to fill many holes on their roster. Their defense, while no longer one of the top units in the NFL, mostly played well enough to give them a chance to compete, finishing among the middle of the pack on most categories. Their offense, however, is a different story.

After lavishing the elite Joe Flacco with a $120 million contract, he responded with a career-high 22 INTs and finished 32nd in the league in Passer Rating, barely above such gunslingers as Geno Smith and Brandon Weeden.-Steelers_Fan_to_the_Core

After lavishing the elite Joe Flacco with a $120 million contract, he responded with a career-high 22 INTs and finished 32nd in the league in Passer Rating, barely above such gunslingers as Geno Smith and Brandon Weeden - what must be considered his worst season so far. Granted, he had to deal with the loss of the always reliable Anquan Boldin in a trade to the 49ers and his favorite TE Dennis Pitta being out most of the year with a hip injury.

The running game, traditionally their forte, was simply terrible last year - finishing 30th in the league while being dead last with a paltry average of 3.1 yards per carry. Ray Rice was a shell of his old self and, at 27, may be showing signs of a steep decline in production that often happens to running backs of his size and build.

However, the main culprit has to be the performance of their offensive line. Flacco was constantly harassed while being sacked a career high 48 times (second most in the league in 2013), and they struggled all year opening up running lanes for their backs. Gino Gradkowski hasn't cut it replacing Matt Birk and Kelechi Osemele hasn't been able to remain healthy. The Michael Oher feel good story ended up in disappointment, as he won't be back. The acquisition of Eugene Monroe helped some, and they should feel lucky that they were able to re-sign him during free agency.

The Ravens pick could go a number of ways. They could use some help at WR, but while Odell Beckham and Brandin Cooks are enticing choices, a receiver-rich draft class plus the free agent signing of Steve Smith from the Panthers probably means they'll wait until later on to address it. Also, acquiring Owen Daniels to pair him up with Pitta tells me Eric Ebron is not a likely option at this point either.

In reality, the Ravens are lucky and very happy to find that BPA matches their biggest need, so much to Mr MaLoR's satisfaction, as Baltimore runs to the podium with their choice. 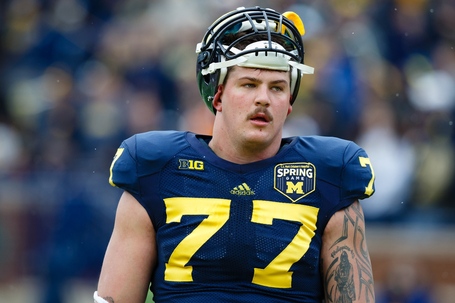 There's really not much I can add that hasn't been already discussed recently about Lewan, but besides his off the field issues, he should be able to give a major boost to a unit that sorely needs it. And the Ravens (sigh) have to feel grateful that such a talent fell into their laps.