The Jets were key to (almost) squeaking the Steelers into the playoffs last year, and they have many of the same needs as Pittsburgh going into the draft. BTSC contributor DropTheHammer is here to try to make sense of it.

I must confess: I was born in New York and when I was five years old I lost my heart to the glory of Namath. Despite all my family could do or say, I grew up as a Jets fan. The Jets are for me like that girl you fell for at 13; the one who made your liver do backflips every time she smiled, and who's since moved to Atlantic City to be a sometimes-headliner showgirl almost, but not quite good enough to make it in Vegas too. As if that was the big leagues. Meanwhile, you ended up in Pittsburgh and discovered a team actually worthy of your love in the land where Namath was born ... though you never forgot the thrill of that smile.

The point is, I know what it means to be a Jets fan. Jets Fan has been trained by the lash. Jets Fan was raised in utero on tales of the mighty Wall Street Giants who dominated the 50's. Then that brief flash smile when you were a kid ... followed by the Dolphins and Shula. O.J. Simpson (who we regularly stopped when no one else could, by the way). Then Buffalo, with Kelly and Bruce Smith. Then the damned Giants again, whose only saving grace was the fact that they stuck it to Buffalo. Miami with Marino. Then New England, with Belichick and his crazy defense...and then with Brady...and then Brady and Welker...and then Brady and Welker and Moss...and then Brady and Gronk and Hernandez...and then Brady with Effin' Nobody!

Jets Fan has been trained by the lash, and above all Jets Fan wants to get back some of his own. And in this mock draft he will, thanks to the Pittsburgh Steelers.

you know what Jets Fan has learned from all the pain? Defense wins.-DropTheHammer

Now I don't want you to think that Jets Fan is irrational, or lacks a sense of history. Pain makes for an excellent teacher. And you know what Jets Fan has learned from all the pain? Defense wins. Jets Fan remembers '69 Jets and knows that Namath wasn't the key. Broadway Joe was great, and he was my guy, but Johnny Unitas was better and I'm man enough to admit it. The Jets won Super Bowl III because we held the greatest offense in football to seven measly points. 16-7. Look it up. The Dolphins succeeded the Jets with the No Name Defense, until they were surpassed by that vicious Raiders D and then the Steel Curtain. Jets Fan hates the Giants and would have scorned Phil Simms, but Lawrence Taylor? The stuff of envy and lust - and the stuff that stuffed Buffalo's vaunted K-Gun. Yes, Brady's been killing us, but even that super-model-marrying [string of expletives deleted] hasn't won a Super Bowl since Belichick's defense fell apart (thanks again Giants!). And it wasn't that long ago that the Jets made it to Championship games ... with defense.

So don't kid yourself. Jets Fan believes in defense, and if there is a great defensive player on the Board the Jets are going to pick him regardless of what the pundits might say. I did my research over at Gang Green Nation and heard threats of violence if Mosley got passed over. But there hasn't been a worthy defensive player on this particular Board since pick 11 so that hasn't been an issue. Which brings us back to the Steelers.

The Steelers are the choke point for this year's Jets because we have similar needs.-DropTheHammer

The Steelers are the choke point for this year's Jets because we have similar needs. Both teams want a corner. Both teams could use a great ILB. Both teams will never look away from a pass rusher. And both teams want an offensive playmaker. The emphasis is different because the Steelers need defense 2:1 and the Jets need offense in about the same proportion, but the actual positions overlap. So my inner Jets Fan cringed when the Steelers went on the clock ... and broke out in cheers and tears of joy when the name Dennard got announced. O frabjous day! Callooh! Callay!

There has been a hearty debate over at Gang Green Nation on the Beckham-or-Cooks issue because anyone can see that those are the likely wide receiver options. Should the Jets go for the athletic genius who plays inside and out, or the next Wes Welker who will dominate from the slot? Here's their poll if you want to vote. But the win of all wins - the one that Jets Fan knows will never happen... 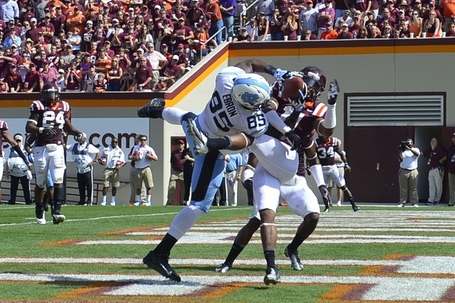 There are Receivers to be had in Round 2. Lots and lots of them. Jordan Matthews, Donte Moncrief, Allen Robinson, Cody Latimer, Kelvin Benjamin...they aren't Beckham or Cooks, but they're first round talent nonetheless. In any other year, getting one of those in the second would be a dream come true. This year it's realistic.

At tight end, though, there is no one even close to Eric Ebron. The Jets are so hungry for Ebron that our GM has been spreading anonymous rumors about his supposed shortcomings. (If you didn't realize that "anonymous executive" starts with a capital "I" and ends with a "k," you're the only one. Jets Fan has been laughing hysterically that the media gave that line so much play). Jets Fan believes the same thing as Mike Mayock: that Ebron may be the most athletic tight end in the NFL from the moment he steps on the field - not the best one, but arguably the most athletic and with the potential to be the best. Eric Ebron may even be the #1 player overall on the Jets Board. Jets Fan raced to the podium for Ebron in the SB Nation mock, and Jets Fan will do it again here.

All hail John Idzik and the power of well placed nasty gossip. P.T. Barnum, the native New Yorker, said it right: there's a sucker born every minute. After years of getting gashed by Gronk, Jets Fan is going to get back some of his own! Eric Ebron, welcome to the team that used to be the most dysfunctional in all of football, but isn't any longer. J-E-T-S, JETS JETS JETS!