Mike Wallace's greener pastures (that may or may not be trying to trade him already depending on who you talk to) are up now in our community mock, with BTSC reader steeler_chris_5 representing the Dolphins.

The 2013 Miami Dolphins finished 8-8 and out of the playoff mix for the fifth straight season. They dealt with a questionable draft day trade (Dion Jordan) and issues regarding bullying in the workplace involving Jonathan Martin (now in San Francisco) and Richie Incognito (who knows if he will play in the NFL). Head Coach Joe Philbin survived this storm but will be heading into the 2014 season on a very hot seat, especially with new GM Dennis Hickey calling the shots.

The Dolphins have made some moves in free agency to help shore up a lackluster offense that finished 27th in total offense and scored 32 TOTAL touchdowns last year (put that in perspective, Peyton Manning, Drew Brees, Andy Dalton and Philip Rivers all threw for at least 32 TDs last season). The Dolphins scored over 30 points just once last year (the snow game against the Steelers). This is the same offense that put up 7 points in the last two games of the season against the Bills and the Jets when they controlled their own playoff destiny. To say the Dolphins offense lacks punch would be a gross understatement. 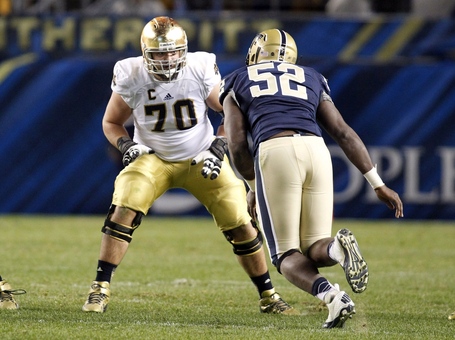 QB Ryan Tannehill took 58 sacks last season, leading the league in that dubious category. The Dolphins did well to get LT Branden Albert in free agency and they still have Mike Pouncey at center. However, the offensive line needs more depth and Martin would be a solid draft pick. He would be a great addition to a much-maligned unit that, save for Albert and Pouncey, has 26 total starts between 7 players currently on the roster.

Martin will likely be inserted at right tackle for the Dolphins and would provide solid athleticism and effort, not to mention be a solid character guy - which is needed after the Incognito drama. New offensive coordinator Bill Lazor and offensive line coach John Benton have their work cut out for them. However, Martin would be a strong addition to a very weak position in the Dolphins' offense.