"Steelers West" was the only team last year to beat the Super Bowl champion Seahawks in Seattle. BTSC reader Wichita SunSteeler has their pick.

Looking at the way the board fell I couldn't help but feel the same disappointment that Cardinals fans everywhere felt after desperately cheering for their 10-6 team to sneak in to the playoffs. Prospects like Calvin Pryor and Aaron Donald that I so coveted were taken earlier than I expected, leaving me to scramble for another 1st round grade player that would address the major needs on this Cardinals roster, few as they may be.

The more I got to thinking though, the more I realized I had the freedom to get creative with this pick. Personally, I can't help but think the Cardinals are missing one key ingredient to their defense. Something the division rivals in Seattle and San Francisco have in spades - guys that can get to the passer. Now the D-Line in Arizona is pretty nasty, but across from Sam Acho they're a little lonely. So why not go with the guy who's come on strong in the past months? 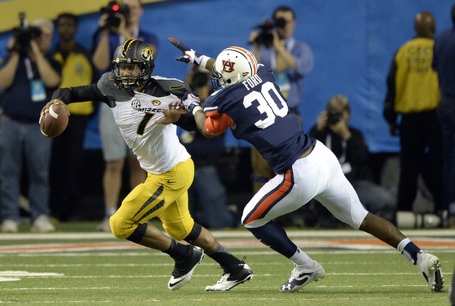 Dee Ford was the stand out by far at the Senior Bowl this year - his performance even had select Steelers fans clamoring for him to be taken at 15. Ford was a stand out on Auburn's defense that made it to the national championship, and he led them with 29 tackles (14.5 of them for a loss), 10.5 sacks and two forced fumbles. Ford will be a handful for tackles at the next level, and could potentially be a double-digit sack guy in the next few years.

What better to add to an already potent defense that's featuring (in my opinion) the best cornerback in the league? It may be a bit of a reach to some, but since trading down is not allowed in this mock, I'm sticking to my guns and calling for the Cardinals to take Dee Ford.